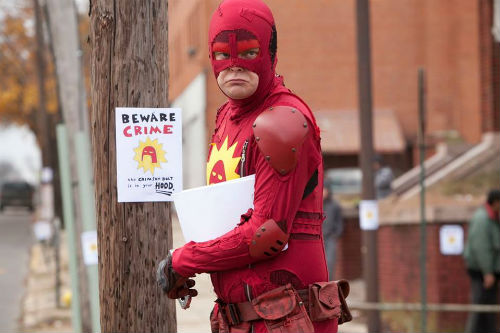 The much anticipated Marvel Cinematic Universe (MCU) film, Marvel’s Guardians of the Galaxy, will be released in just over a month. In preparation for the film, and to know what to expect from the director/co-writer James Gunn, I recommend two of his other films: Slither and Super.

Slither is a horror/comedy, mainly influenced by older B-movies. The plot focuses on slugs from space that infect people and turn them into zombies, starring Nathan Fillion (do I need to say anything else?). The cast’s acting is over-the-top which is fitting to the story. The movie isn’t deep or anything, it’s just a good time for fans of cheesy and campy horror.

Super is a better look at James Gunn. It’s his first attempt in the superhero genre. The film has a huge cast, including Rainn Wilson (Dwight from The Office), Ellen Paige (Juno and the X-men films), Liv Tyler (The Incredible Hulk, The Lord of the Rings), Kevin Bacon (Footloose, X-men: First Class), and again, the amazing Nathan Fillion. The film is about a crime-fighting vigilante, The Crimson Bolt. The film is funny and moving, with a character that is oddly easy to sympathize. I think that is the strength of the film; it’s an emotionally satisfying story in spite of its ridiculousness. It is a bit jarring at times, but in the end it wraps up perfectly. Please be aware that the film is pretty intense and includes sexual assault.

Both films show Gunn is capable of handling Guardians; however, there is a troubling aspect of Gunn’s work. Both of the women in Super are mainly in the film to drive the story of the male protagonist. Slither handles the lead women a bit better, but they get little character development in a movie that doesn’t require well-written or dynamic characters. Unfortunately, Gunn’s women tend to fall into the “disposable women” trope and I am a bit guarded in how they will be treated in his upcoming movie. That isn’t to say that the director/writer can’t learn from his mistakes, but I think it is safer to have lower expectations in this area.

Those critiques aside, both films are worth watching and should give an insight into the director/co-writer of the upcoming Marvel movie. They both show that Gunn is a really talented director and Marvel’s Guardians of the Galaxy should be a great addition to the MCU.