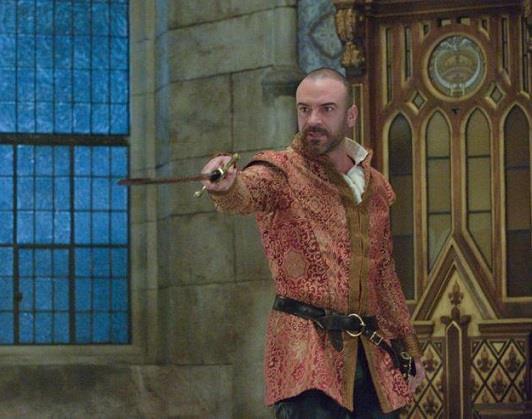 I knew it!  I’m sorry, my fellow Royals, for missing last week’s episode.  Real life got in the way, and I was unable to submit my review.  But I am ready to sink my teeth into this one!  Henry found a new mistress who encouraged him to descend deeper into madness.  Mary’s ladies’ love woes continued with Lady Kenna, in her eyes, coming out as the ultimate loser.  Bash and Francis saved each other’s lives and mended their bond, which is probably my favorite thing to come out of this episode.  But before I gush anymore, let’s jump right into my thoughts on “Monsters”! 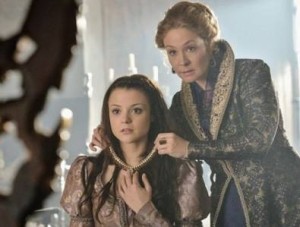 The episode started with another one of those throw-away court celebrations, this one being “Queen of the Bean”.  The person who finds the bean gets to be royal for a day.  The lucky winner was a pretty servant girl from the kitchens, Penelope (how convenient for her), who immediately caught Henry’s eye.  Catherine received a potion from Nostradamus to drug Henry so that he would finally get some sleep and tried to use Penelope to make sure he drank it.  Unfortunately the plan backfired in a big way when Penelope went on a power trip and told Henry about the potion, saying that Catherine threatened to kill her if she didn’t drug him.  Henry really seemed to slip off the deep end as he proclaimed Penelope as his queen and said he would kill Catherine if the older woman moved against her.  I feel sorry for Penelope as she has no idea what she has gotten herself into and will learn very quickly that she’s bitten off way more than she can chew.  Not to mention Catherine might be gunning for her as well, regardless of Henry’s deranged warnings.  This girl would have to be very stupid indeed to believe she is anywhere near the location of “safe”.

I’m interested to see where the writers will take this storyline with Henry and if this madness will be the thing that ultimately ends up being his demise.  Always the history buff here, Henry died after a jousting tournament when a head wound from a lance fragment became septic.  The man that inflicted the wound was the captain of his Scottish Guard.  How very interesting!  Surely the writers of the show won’t ignore such a juicy detail of history.  Perhaps Henry will continue his descent and threaten the very security of the realm, causing Catherine, Mary, and Francis to join forces in a plot to bring him down.  With him being this unstable, I don’t think his erratic behavior will be contained to the castle for very long, especially given his obsession with the English throne.  Unfortunately Catherine wasn’t the only one privy to Henry’s madness.  He brazenly asked Mary to fool around with his “new queen”, Penelope, while he watched and admitted to Francis and Bash as being the one who plotted to have Bash killed, the episode culminating in the most awkward wedding ceremony ever between Bash and Kenna.  But more on that in a moment.

After “the darkness” in the woods took Rowan, Bash went to the castle to gather reinforcements to kill the beast.  Henry immediately had him arrested and thrown in the dungeons.  Mary worked to free him, but they were discovered by Francis.  To prove his point of the danger in the woods, Bash revealed that Olivia was alive and she gave the brothers clues as to the beast’s location.  Nostradamus further aided them by explaining that this “darkness” was simply a man.  Bash and Mary said that Francis was blinded by his anger and jealousy toward Bash, but he wasn’t the only one.  Before their encounter, Bash let his suspicions about Francis blind him to any other possibility.  But the brothers repaired their bond when Francis fell through the ice and Bash saved him.  Francis later returned the favor when Henry came to finish what he started, revealing himself to be the mastermind behind the attempt made on Bash.  I actually cheered when Henry admitted to it, having never believed that Francis had been the one.  He was just hurt and angry by his brother’s betrayal, the one person he thought he could trust above all others.  But it didn’t matter how angry Francis was, there was no way he could hurt his brother.

Henry was “touched” by the reunion of his sons and decided to celebrate by marrying Kenna off to Bash, effectively removing that thorn from his side.  Kenna was devastated and reminded Henry that he promised her a man with a title, prompting him to appoint Bash as the Master of Horse and Hunt.  I think this was the best thing that could happen to Kenna.  Yes, it is horrible that she was forced into a hasty marriage, but considering Henry’s mental deterioration, she is much safer with Bash.  Perhaps Bash will be a positive influence on her and prompt Kenna to have a little more self-worth.  This was something that bugged me when the writers introduced this relationship between Henry and Kenna.  It almost seemed as though the character plateaued after that, being content to just be a king’s plaything.  It felt like she was merely going through the motions in trying to find a husband.  At least with Bash, she can hope to be seen as more than just a sex object. 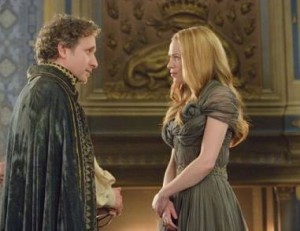 It was a rough episode for Greer, who is easily my favorite lady in waiting.  She met her mysterious suitor, Lord Julian, and their engagement seemed like a done deal.  But Leith came to Greer’s chambers and they kissed right as Greer’s new fiancée entered with a gift.  Leith was taken away, and Lord Julian, not wanting a wife tainted by rumor, called the marriage off in a very gentle way.  Greer was terrified that Leith would be beaten and imprisoned, but sweet Lord Castleroy (AKA Lord Peppercorn) came to the rescue again by managing to get Leith conscripted in the royal army and offering his hand in marriage yet again to save Greer from ruin.  I can’t help but like Lord Peppercorn.  When he found out about Greer’s affection for Leith, he didn’t explode into a rage but merely counseled her about the dangers of such an attachment.  Yes, he is much older than her, but he’s a genuinely nice guy, and if Greer has to marry a nobleman, I would rather it be him rather than some jerk.  The potential suitor that Mary had lined up for Lola turned out to be a no-show.  When Greer was bemoaning her and Leith’s situations and noted that Lola was the only lady not to shame Mary with scandal, Lola told her about her pregnancy.  Later Greer in turn helped her friend by suggesting Lord Julian as a possible match.  He treated Greer with respect even after he walked in on her kissing another man, so I have high hopes for him and Lola.  My only worry is how perceptive he is and how he will react if/when he finds out Lola is already with child.  Lola has had such a rough time in the past couple episodes that I’m ready for her to catch a break, so I’m hopeful that this relationship will progress in a positive way.

Unfortunately we have to wait until the tenth for the next episode, which shows Mary beginning to wield her power as a queen.  I love her in moments where she shows she is more than just a young girl because I think those are the moments where Adelaide Kane really shines.  I think that if the show focused more on building stronger storylines and the characters’ strengths and weaknesses rather than risqué sex scenes and tired tropes, we would have a stronger show.  But this is the CW, and when it comes to these kind of historical dramas, the latter seems to be the more viable option. Stepping down from my soapbox, what were your thoughts on “Monsters”?  Overall I thought it was a very entertaining episode and felt a bit meatier as compared with last week’s.  I think like we’re starting to move towards something big plot-wise and Henry is in the center of that.  Comment below with your thoughts and thank you for reading!