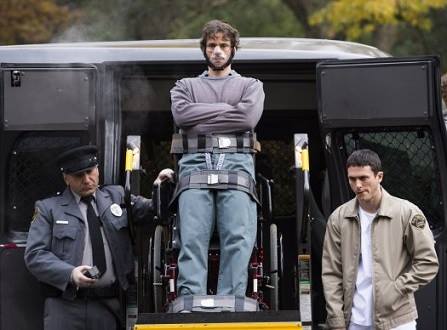 Oh my, how incredibly rude of you, Will.  I think Bryan Fuller and his entire creative team made crossroad deals Supernatural-style because I have yet to be disappointed by an episode of this show.  Each one seems to hold a vital piece to the overall mosaic of the season, and it’s hard to believe we’re almost halfway through with season two!  The veil I spoke of in my Sakizuki review is slowly being tugged at, which our resident cannibal is not happy about at all.  I feel like Will and Hannibal are playing a game of chess, and everyone around them are the pieces.  But enough of that; let’s sink our teeth into “Mukozuke”. 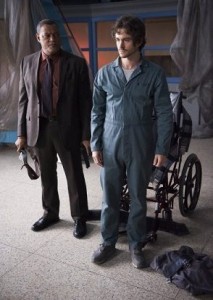 Another moment of silence for our fallen member of Team Sassy Science, Beverly Katz.  I hate it that it was Freddie Lounds who discovered her body, working off of an anonymous tip, but I think we all know who that tipster was.  In Will’s analysis of the scene, he said, “I pull her apart layer by layer like she would a crime scene.”  During the course of her brief investigation, Katz was doing just that to Hannibal, which ultimately led to her downfall.  Had she succeed in exposing him, it would have been Hannibal who would have been pulled apart layer by layer.  So displaying her as he did, putting Katz’ body in the same place he put Miriam Lass’ arm, and having Freddie Lounds discover her almost felt like a reproach and another excuse to taunt Jack Crawford.  I was sick to my stomach and full of boiling rage when Lounds pulled out her camera before she pulled out her cellphone.  This character continues to astound me with her complete lack of human decency and her absolute gall later in the episode when she had the nerve to look down her nose at Will.  Lawrence Fishburne did a fantastic job in this episode, portraying the utter exhaustion of Crawford perfectly.  I felt so bad for Jack.  In the previous episode, Bella tried to kill herself, and as an added bonus, he loses another team member to his faceless foe, the Chesapeake Ripper.  I think that’s why Will held back when Jack asked him about who he thought the Ripper was.  He knew Jack would only become frustrated if he said it was Hannibal, and the man had enough on his plate.  Jack become frustrated anyway and asked Will why he wanted to come in the first place.  My heart hurt when Will simply replied that he wanted to say goodbye.  I think Will had an anger building inside him throughout this episode, a feeling of uselessness.  He knows Hannibal is responsible for Katz’ murder but is in no place to prove it.  He has to remain locked up, yet another thing that is Hannibal’s fault.  Side note: Who else had an epic nerd moment seeing Will in the face mask and straight jacket?  I am a huge fan of Hopkins’ Hannibal Lecter, and seeing Will in that made me think of Silence of the Lambs and squeal for about ten seconds.  That’s the kind of fan service I adore!  Keep it up, Fuller!

I love how Will continued to play Dr. Chilton like a fiddle in this episode.  Raúl Esparza continues to do a fantastic job and plays this character so beautifully.  In Chilton, we see Fuller and Co. giving subtle nods to the fans of the show who love the source material as well.  His remark to Hannibal in the season premiere of Will viewing him as “fumbling around in his mind like a freshman with a panty girdle” tickled me because that was how Hannibal described Chilton in the books.  The characterization is so spot on, the man’s self-importance oozing out of him in every scene he’s in.  Another treat was Eddie Izzard returning as Dr. Gideon.  I’ve been a fan of his since his stand-up days, so seeing him being so meticulous is a real treat.  Will and Hannibal both had meetings with Gideon, trying to ascertain what he remembered about the night with Will.  The good doctor didn’t remember much but was surprisingly forthcoming with Alana on an entirely different topic.  I hope that he will stick around and perhaps be of some help to Will further down the road.

But the real puzzle for Will in this episode was figuring out who was  his admirer that supposedly murdered the bailiff and judge at Will’s trail.  For this task, he once again recruited the skills of the detestable Freddie Lounds, using her article to chum the waters.  It turned out he needn’t looked any further than the hospital, as his admirer was the orderly, Matthew.  He admitted 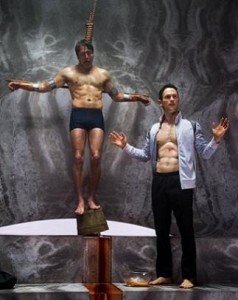 to killing the bailiff but when Will asked him about the judge, Matthew denied his involvement there, saying that was someone else’s work.  Given his bragging nature and how he perceived himself and Will to be friends, I don’t think he was lying about the judge.  I believe it was Hannibal, who thinks of himself as Will’s friend, as well.  We saw how hard Hannibal tried to encourage Will to let this killer take the blame for Will’s supposed crimes and how he fought for that on the witness stand.  And we all know Hannibal is capable of replicating crimes like he did with Garrett Jacob Hobbs.  I wonder if they’re being deliberately vague on who killed the judge for a reason, like perhaps this is another detail, if not the detail, that will reveal Hannibal’s true face.  Speaking of Hannibal, Will made a request of his newfound “friend”: to kill Hannibal.  I think this was motivated by the overwhelming need for vengeance for Katz and the injustice of his situation.  I was surprised Matthew was actually able to get the jump on Hannibal, the man usually being so perceptive.  Matthew didn’t receive a response when he asked whether or not Hannibal killed the judge, but he did receive a positive one when he asked if Hannibal was the Chesapeake Ripper.  Luckily for Hannibal, Gideon had overheard Will’s request of Matthew and told Alana, prompting her and Jack to track Hannibal down.  I suppose it’s a good thing Jack shot Matthew, as he might have spilled the beans (not that anyone would have believed him).  I wonder what kind of repercussions Will might suffer for his inadvertent attempt on Hannibal’s life.

The preview for next week’s episode looks promising, but it’s what they don’t show us that has me all abuzz.  The episode summary was released, dropping quite the bombshell: “When a city councilman’s body is found in a parking lot, intertwined with a tree, the artistry and missing organs are going to suggest the work of the Chesapeake Ripper. Jack and the team will race against time to catch the Ripper while he’s still on his killing spree.  When Will suggests the possibility that the Ripper is filling his pantry with the victims’ organs, Jack is going to crash Hannibal Lecter’s dinner party to collect evidence and test the meat for human DNA. Jack’s growing suspicions will drive Alana even closer to Hannibal, believing he is the victim of a witch hunt.  Meanwhile, clues from the tree man are going to help the BAU zero in on a location they believe the Ripper used. There they will discover the most shocking revelation of Jack Crawford’s career, Miriam Lass alive.”  Say what?!  On principle alone, I’m inclined to doubt this, but the speculator in me can’t help but wonder what this might mean.  If Lass is alive, she’s certainly not going to be the same person Jack Crawford once knew, which begs the question: why Hannibal would have kept her alive in the first place? 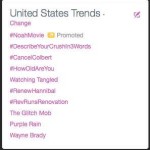 For the Fannibals out there, #RenewHannibal and #Hannibal both trended big time on Twitter during the episode, showing just how loud and proud a fanbase we are!  Keep up the good work, guys!  If you’re curious about how you can help support the show, please check out this article for Hannibal support links galore!

So what are your thoughts on “Mukozuke”?  What were your favorite and least favorite moments?  Do you think Hannibal was responsible for the judge’s death?  Do you think Gideon will eventually recover his memories?  Whatever your thoughts are, comment below and let me hear them!  Thanks for reading!