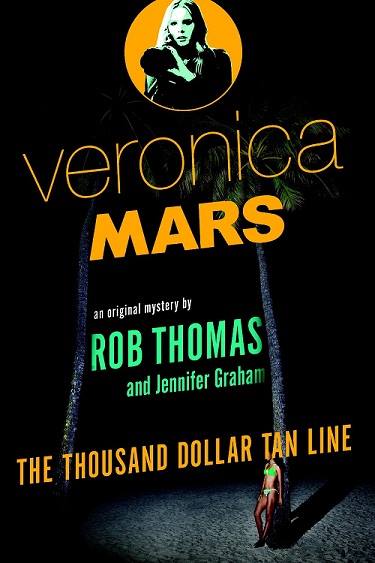 After you watched the Veronica Mars movie, were you filled with that overwhelming need to know what happened next?  Well then have I got the cure for what ails you!  Released not long after the film, The Thousand Dollar Tan Line is an enjoyable and easy read for any fan of the show and is a series that I hope will be continued.

Warning: This article is mostly spoiler-free but in discussing the novel, there are small spoilers for the film.

Veronica Mars: The Thousand Dollar Tan Line was published on March 25, 2014 by Rob Thomas and Jennifer Graham.  The summary of the novel is as followes: “Ten years after graduating from high school in Neptune, California, Veronica Mars is back in the land of sun, sand, crime, and corruption. She’s traded in her law degree for her old private investigating license, struggling to keep Mars Investigations afloat on the scant cash earned by catching cheating spouses until she can score her first big case.  Now it’s spring break, and college students descend on Neptune, transforming the beaches and boardwalks into a frenzied, week-long rave. When a girl disappears from a party, Veronica is called in to investigate. But this is no simple missing person’s case; the house the girl vanished from belongs to a man with serious criminal ties, and soon Veronica is plunged into a dangerous underworld of drugs and organized crime. And when a major break in the investigation has a shocking connection to Veronica’s past, the case hits closer to home than she ever imagined.”

Full disclosure: I came into this fandom a bit late in the game.  My cousin got me into it just this past year and we marathoned the crap out of all three seasons of the show in preparation for the film.  So, by that time, I was totally hooked.  Rob Thomas and Kristen Bell created a character that was so relateable and fun that it’s understandable why Marshmallows weren’t able to let go.

Like I said before, the book is an easy read.  It reads like slipping under a blanket that you’ve had for years: comfortable and inviting.  While I would have preferred the book be in first person, the third person narrative style doesn’t take long to get used to at all.  But what I loved the most was how it addressed the consequences of Veronica’s decision to stay in Neptune.  That issue is quite the elephant in the room anytime she and Keith are together, her father not wanting the life of a PI for her.  I think that is one of the things I loved the most about the show: the bond between father and daughter.  Too often on tv shows do we see teenagers at constant odds with their parents, stuck in that you-couldn’t-possibly-understand-what-I’m-going-through mindset.  So to see Keith and Veronica sticking together and having the fantastic banter that they have is so refreshing.  It reminded me of another one of my favorite parent/child relationships: the Stilinski men from Teen Wolf.  Said banter and the act of sticking together translates well in the novel, almost to the point where you can hear and see it in your mind as you read the words on the page.

Keith isn’t the only character to make an appearance in the novel.  Mac is there, 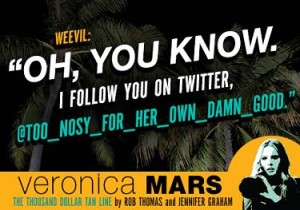 working as Veronica’s hacker/research assistant.  Other favorites such as Wallace, Weevil Navarro, and Cliff McCormack drop in to help Veronica in her investigation.  Logan is deployed with the Navy throughout the course of the story but the newly “reunited” pair make a few aborted attempts at Skype chats.  As for the case itself, it feels like something we could have seen on the show, with all the twists and turns that one can expect with our favorite sleuth.  The case kept me engaged and was a nice page-turner. I didn’t want to put it down until I had finished.  I won’t give away who the blast from Veronica’s past is, but it is pretty shocking.

If you’re a Marshmallow through and through or just a fan of mysteries, I would highly recommend this book.  There is an unabridged audio book available for fans on the go, read by none other than the lovely Kristen Bell herself.  With no real news as to whether we’ll see Veronica on the big screen again in the near future, this book is a nice way to revisit her.  The next book, Mr. Kiss and Tell, is set to be released on October 28, 2014, so keep your eyes peeled for that!

If you have read this book, what were your thoughts?  Did you enjoy it as much as its predecessors?  Comment below and thank you for reading!