For those of you who couldn’t make it to San Diego this year, we’ve got the scoop from the Teen Wolf panel right here! The Geekiary live-tweeted the panel, which took place at 3:30pm Pacific, so look no further for the details than right here! Also, these photos were taken live at the event so please be patient until we get clearer images uploaded.  (Update: Teen Wolf Panel Photos)

The biggest news to come out of Teen Wolf panel is that the show has been renewed for a fifth season with 20 episodes! Along with this, Dylan Sprayberry, who plays the newly turned werewolf Liam, will become a series regular next season. Jeff Davis claimed that the road to accepting his new abilities will be a rocky one for Liam though he’s not the only one facing a hard road ahead. Stiles and Malia, otherwise known as Stalia, will also be struggling through their relationship in upcoming episodes. 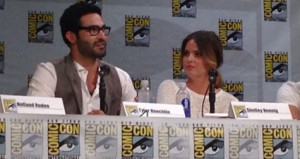 Nonetheless, Shelley Hennig (Malia Tate) enjoys their dichotomy, especially the fact that Malia is “the big spoon.” She also claimed that Malia brings a sense of “honesty” to the show. We can’t argue that she adds to the woman power this season. Holland Roden (Lydia), who was a Women’s Studies major in college, is proud of the fact that half the characters on Teen Wolf are women. We’re also excited by the fact that viewers will get to see more backstory into Lydia’s family and her banshee powers, along with Lydia finally having some “romantic freedom”!

Derek Hale, according to Tyler Hoechlin, meanwhile, will have to struggle with the apparent loss of his powers in upcoming episodes. Another mystery that has been bothering Teen Wolf fans is the disappearance of fan-favorite Danny. Jeff Davis promised the audience that we have not seen the last of him!

In terms of heartwarming panel moments, Dylan O’Brien (Stiles) was asked a question by a young girl who was crying at the microphone. He responded by signing his name card, giving it to her and giving her a hug! Tyler Posey (Scott) admitted that he hadn’t considered the importance of being a lead person of color in a TV show but is now proud of how this has inspired people. He claimed, “All I ever want to do is inspire people.” 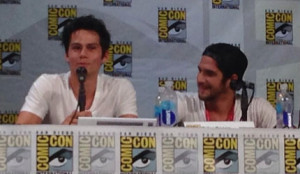 Of course, shipping was discussed, in a light-hearted manner. Holland joked that she ships Chris Argent and Coach, dubbing the couple: “Coachent.” But shippers may have reason to celebrate: Jeff Davis hinted that there’s “lots of talk in the writers’ room about Sheriff Stilinski/Melissa McCall.”

Were you at the Teen Wolf panel today? Tell us what you thought! And keep checking back at The Geekiary for more updates from San Diego Comic-Con!