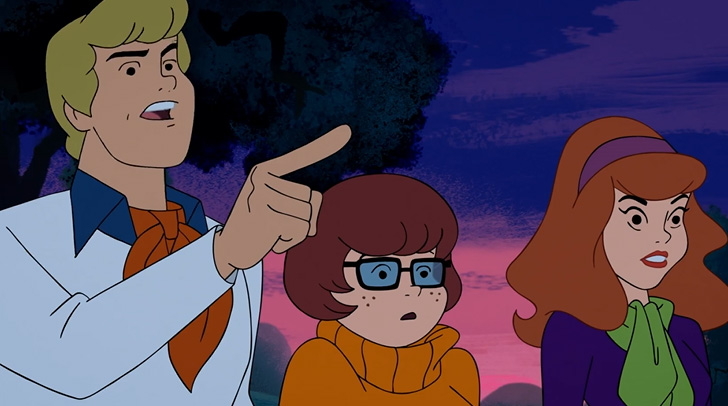 Fred, Daphne, and Velma in Scooby Doo and Guess Who, (Source: Boomerang, 2019)

Scooby-Doo and Guess Who? marks the return of our favorite mystery-solving gang. But this time, it looks like Mystery Incorporated is getting some help with their mysteries from celebrities and big historical figures.

The official trailer for the upcoming series Scooby-Doo and Guess Who? just dropped on the internet. And wow, it definitely looks like it’s going to be a wild ride!

In the trailer, Scoob and friends come face-to-face with all kinds of new villains, while simultaneously meeting up with some of the world’s most famous celebrity figures. Wonder Woman, Sherlock Holmes, Sia, Chris Paul, and Ricky Gervais seem to just be a few of the stars we’ll see in the actual animated series.

The series itself is reminiscent of an older Scooby-Doo cartoon series from the early ’70s, The New Scooby-Doo Movies, wherein Scoob and the gang would end up bumping into famous celebrity figures like Sonny and Cher, The Addams Family, Don Knotts, the Harlem Globetrotters, and even Batman and Robin, to help solve whatever kind of mystery was afoot. More than likely, it seems like this new series will follow the same formula.

Scooby-Doo and Guess Who? will debut on Boomerang’s online streaming service. Boomerang has a selection of classic cartoons, like the original Scooby-Doo Where Are You series from the ’70s, as well as other shows like Looney Tunes, The Flintstones, The Jetsons, Johnny Quest, and Tom and Jerry.

However, it seems the upcoming series won’t just remain an online exclusive. IGN reports that following its premiere on Boomerang’s streaming service, the new show will eventually premiere on Cartoon Network sometime in 2019.

Are you excited to see Mystery Incorporated back in action? Did you guys watch the original The New Scooby-Doo Movies growing up?

Scooby-Doo and Guess Who? will be coming to the Boomerang channel on VRV as well.

VRV is a fandom-focused video platform from WarnerMedia Entertainment. New episodes will premiere on VRV’s Boomerang channel weekly. The season finale of Scooby-Doo and Guess Who? will be premiering on Thursday, September 19, 2019.

For those interested, VRV is a “basecamp for all things fandom, featuring a curated selection of SVOD channels including Crunchyroll, Rooster Teeth, Boomerang, NickSplat, Shudder and more.”