The Seventh Decimate: An Unfortunately Forgettable Beginning to a New Series 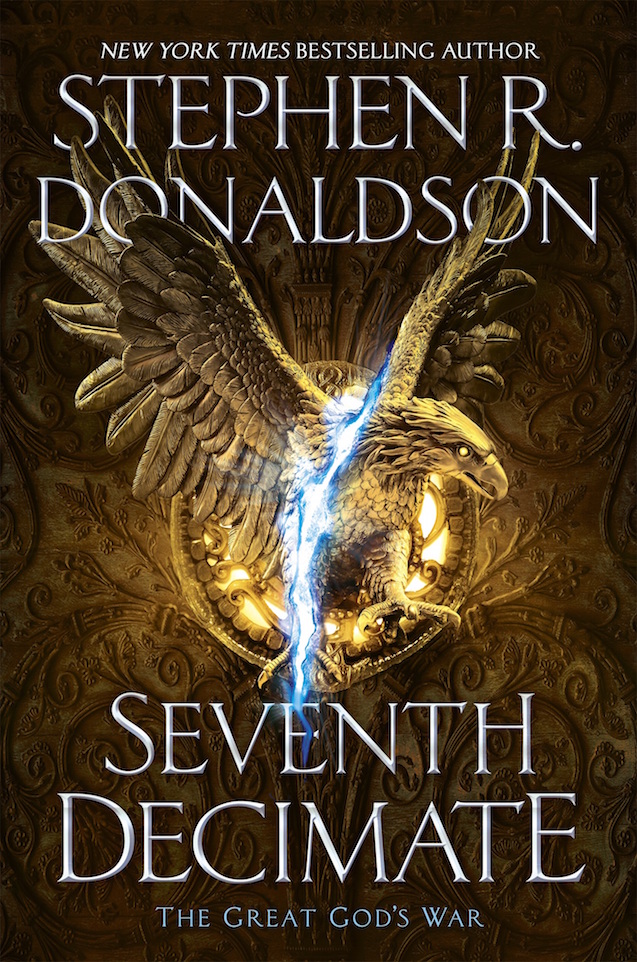 When I received an Advanced Reader copy of The Seventh Decimate by Stephen R. Donaldson, I was hoping to fall for this first book in a new series; unfortunately, the story did not live up to its premise.

The Seventh Decimate starts off with a bang – several of them, really, because the reader is immediately thrown into a battle between two nations, Belleger and Amika. While this was a somewhat jarring beginning, the idea of a war between a country with repeating rifle technology facing off against one with sorcerers sounded interesting enough.

Unfortunately, at no point did The Seventh Decimate follow through on that interesting premise. The prologue is lackluster, but I’ve never been one to assume that a prologue makes or breaks a novel. Unfortunately, after a bit of a time skip between the prologue and part one, the only thing that has changed is that Belleger’s sorcerers no longer have access to their ‘magic’, for lack of a better word. Because by the way, both countries had sorcerers – apparently Amika’s were simply stronger, which is why Belleger needed rifles. Rifles that they can’t keep producing now that there is no magic.

I understand that some of this sounds like spoilers, but trust me, it’s really not – all of this information is revealed within the first dozen or so pages. And that would be fine if it weren’t for the fact that Donaldson seemed to throw all of his punches right away and then spend the rest of The Seventh Decimate inside the main character, Prince Bifalt’s, head. And if I’ve ever read a more one-dimensional and frustrating character than Prince Bifalt, I’ve apparently forgotten who it was.

Seriously, Prince Bifalt is boring, overly stubborn, ignorant…I could go on and on. Not only is he not interesting, he’s downright maddening. At no point in this novel does he grow or change; it’s only in the last few pages that he makes a decision that can be perceived as a sort of ‘change of heart’…and even then his decision seems forced, even pigeon-holed in as part of an attempt to make readers want to read the next installment in this series.

Personally, I’d heard a lot of good things about Stephen R. Donaldson as an author, but unfortunately this was my first foray into his work and I’m obviously not impressed. Was The Seventh Decimate the worst book I’ve ever read? Not by a long shot. But it was predictable, and maddening in its predictability, because everything that is obvious to the reader is ignored by the main character thanks to his own ignorant prejudices.

All that said, if you are one to suffer through the first installment of a series in hopes that it will get better, and/or if you are a big fan of the author, I suppose this novel is worth a try. As I mentioned at the beginning, the premise is interesting, and if Donaldson focuses on some more solid world-building rather than spending so much time in the [very frustrating] main character’s head, there is a chance that the series as a whole could be saved. As for me, I’m going to stick with series that have been suggested to me by trustworthy sources – next on my list is the Grisha trilogy, a recommendation from several friends, including fellow Geekiary writer Jamie.

The Seventh Decimate by Stephen R. Donaldson is available for pre-order on Amazon and will be released on November 14, 2017.