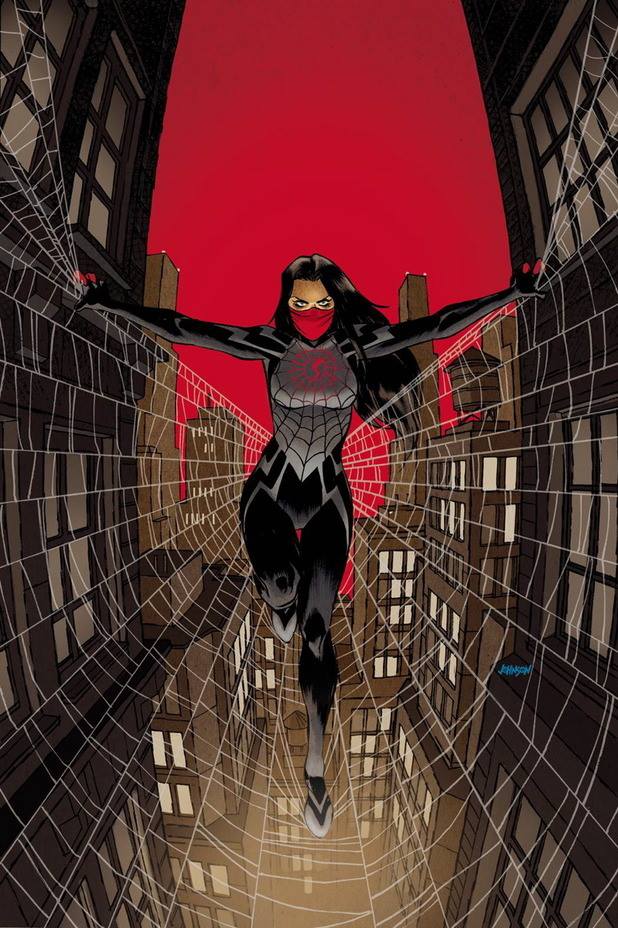 I’m a huge fan of the TV show Supernatural, so when I heard that one of its writers was going to be involved in a comic book series, I knew I had to pick up the title. I love Robbie Thompson’s writing on Supernatural, and I was not disappointed with his first issue of Silk.

I’m not too familiar with Spider-Man outside of the Tobey Maguire movies and when the character shows up in Deadpool comics. I must confess that I’ve never even heard of Silk/Cindy Moon; my introduction to her is purely through this comic book. I love that she’s fun and quirky and that she doesn’t quite get some of the modern things like Twitter, as she’s been in a bunker for the past 10 years. Those of us who are familiar with Thompson’s writing will see his usual style. Cindy likes to ask things “for a friend” (actually for herself, though), and even calls the bad guy a Pokémon while asking if Pokemon is still a thing.

Cindy has a bit of a tragic story – her entire family disappeared 10 years ago and she is trying to find them. She spends the rest of her time saving people and responding to her “Silk-Sense”. She’s a reporter for her day job and pitched Silk as her next big story.

Some fun things to make note of: Spider-Man does make a couple of appearances in the book – Cindy and Peter used to have a thing, and now they’re friends…or so she guesses. For fans of Supernatural and Sleepy Hollow, one of Cindy’s coworkers mentions a new show called Supersleepy which is something Sleepy Hollow’s Orlando Jones talks about often. The character describes Supersleepy as a show about a cop and an angel who fight monsters. So there’s your Castiel reference, Supernatural fans!

There seems to be a movement in the right direction with both DC and Marvel lately, as they’re both giving more female characters their own series. This is something many of us have been waiting to see, and it makes this comic book reader very happy! In Silk we have a female woman of color fighting crime and passing the Bechdel test in the process. (In fact, Cindy talks to two female characters about being interested in each other!) I’m very happy with Silk and definitely plan to continue with the series.

5 thoughts on “Silk #1 Review: My Silk-Sense is Tingling”