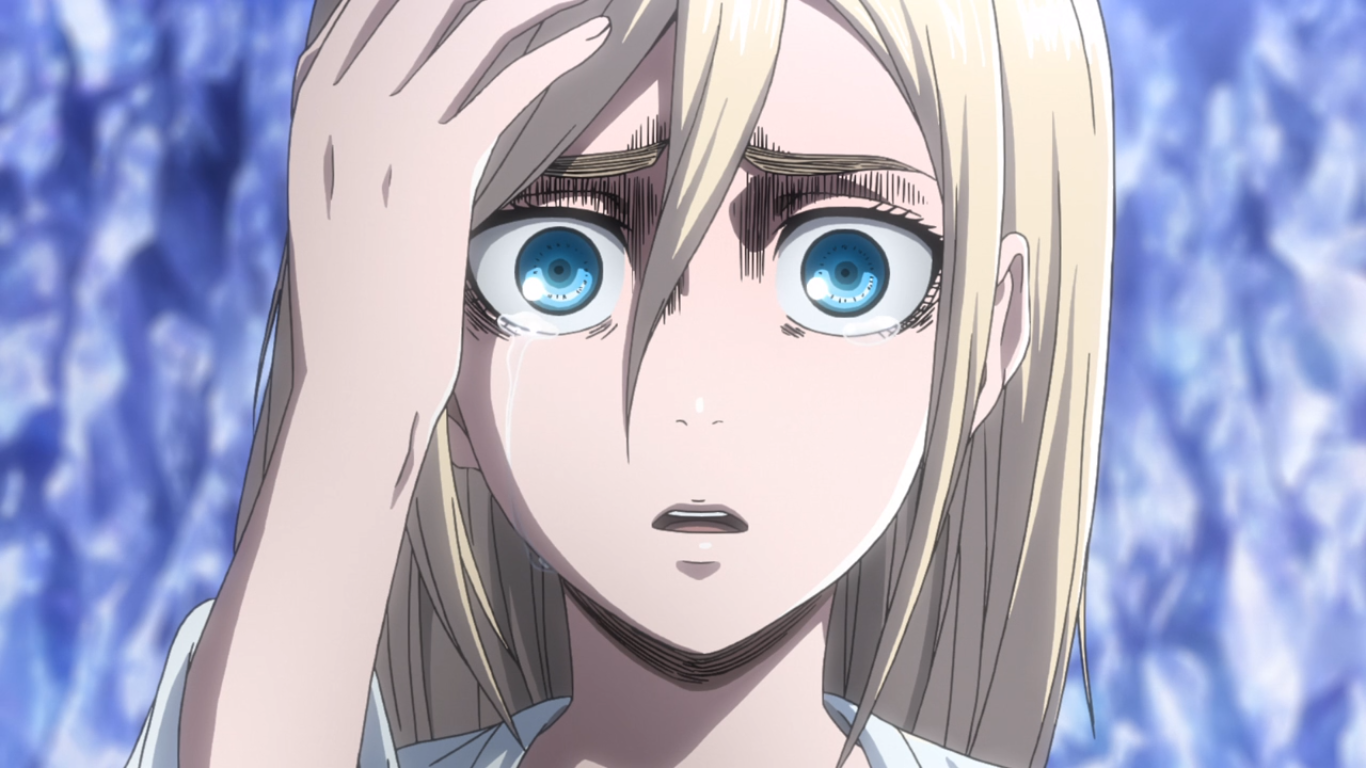 Wowee wow wow. Attack on Titan pulls no punches. “Sin” and “Wish” are successful both at answering some of my lingering questions and yet raising a bunch more. At least now we know what happened to Eren’s father. (But we still don’t know what’s in the basement!)

“Sin” does an excellent job at making you wonder who the bad guys are. But, like Levi said to Armin after their first battle with the Interior Police, there really isn’t a “right” or a “wrong”. Even Kenny wouldn’t look all that bad, if it weren’t for the fact I know that he killed a ton of people. And, uh, the less said about Zachary’s…device…the better. I’ve become a little big desensitized to the violence on this show, but that torture scene made me squeamish. (Also, I was watching it on my phone in an airport. Probably not the best decision I ever made.) But I think what frightened me most was that the Reiss family had the ability to erase people’s memories. I’ll be hiding in my closet if you need me.

The big star of both “Sin” and “Wish” is Historia. I’ll tell you, I was legitimately worried for a while there. I thought her 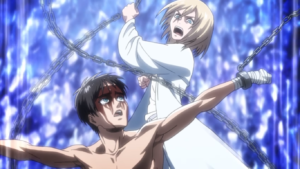 father was going to manipulate her into doing what he wanted, but she fought back and made up her own mind. Of course, now her father has turned himself into a giant Titan and they’re trapped in a cave with him, but what are you going to do? (THAT TRANSFORMATION SEQUENCE.) When she smashed the syringe and ran up the stairs to rescue Eren, I actually gave a cheer. And I loved her calling him a crybaby. Reiss wasn’t just trying to manipulate Historia – he was 100% using emotional blackmail on Eren, as well. Historia is right; they had the ability to control the Titans for a century and they never attempted to bring peace, because they never intended to. Is it true that only those with the memories of the before time know why, or was that another manipulation attempt?

This was a great couple of episodes for Eren as well. Boy has just been dealt a mighty shock – the one-two punch of learning a) that he ate his father and b) that his father (and subsequently him) may or may not be responsible for hundreds of unnecessary deaths. His sobbing confessional was masterfully done, and his desire to right the wrongs by sacrificing himself for the greater good both shows a new side to his character and goes against type for a shonen manga protagonist. 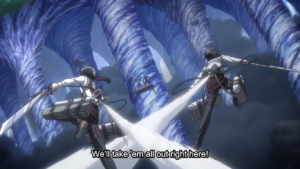 I have a mighty need to talk about that action scene in “Wish” with Squad Levi fighting the Interior Police. First of all, igniting barrels of gunpowder using fire arrows and employing the flares as a smoke screen? That was sheer brilliance. These people are going to take over the freaking world. Plus, any time Mikasa and Levi time up is going to be a good time. (I think Levi is starting to figure things out based on their conversation in “Sin”, but how long until they learn they’re related? Come on now.) And as much as I hate that my children have to do this at all, Jean and Connie’s first kills were amazing. But, really, that whole sequence is unbelievable. From the animation to the soundtrack, this scene is right up there with Levi’s dramatic escape from episode 2.

Previous:Free 3×08 Review: Metamorphosis of the Soul!
Next: An Interview with Nancy Richardson Fischer