The first childhood crush of many, Amy Jo Johnson has gone on to become more than just the original Pink Ranger. She’s a mother, singer, actress, writer, and director. Let’s catch up with Amy as she currently promotes The Space Between, her feature film directorial debut.

I got to know about Amy Jo Johnson during her Mighty Morphin Power Rangers run. I remember the TV series being huge all the way here in Pakistan while growing up. There were Power Rangers video games, action figures, and other merchandise everywhere!

So, of course, I was more than excited when Amy Jo said yes to this interview. I still can’t believe it! Anyway, let’s start.

Q. You asked to leave Power Rangers and by the looks of it things worked out well for you, Kimberly got a proper sendoff and you also got a film Susie Q. Then you also worked on Felicity. How was the experience like on the show? You were definitely working with a lot of talent; there was JJ Abrams, and a cast including Keri Russell (The Americans), Scott Speedman (who’s starring in Animal Kingdom), Scott Foley, and more.

I had asked to leave Power Rangers because I felt I was ready to pursue my career. They were very nice in letting me leave. They gave me an amazing Gibson guitar and a fantastic movie called Susie Q. Loved those few years on the show.

Felicity was one of the highlights of my acting career. Working with such talented people was incredible. Animal Kingdom is my favorite show at the moment. Crazy how awful those people are and you just love every one of them.

Interviewer Note: Animal Kingdom is definitely everything and you should all check it out.

Q. Your feature film The Space Between was funded by Indiegogo. Back in the beginning did you ever expect that Kimberly and Power Rangers would have such an impact on people’s lives that they’ll continue to follow and support your career years down the road?

It’s been incredible the support I’ve received from long-time fans of Power Rangers. Some of the most generous supportive loyal people I’ve ever met. The Space Between would not have been possible without them!

Q. I got to know that you’re holding a contest for The Space Between. Tell us a bit about that. I’ve watched some of the submissions and people are really excited to host it. How did the idea of doing such a contest come about?

In September I’ll be going on tour with The Space Between to 8 different cities. It’s called The Super Host tour and we held a contest back in April where we asked supporters to petition to have the film come to their hometown. We had a tremendous amount of submissions and had a really hard time choosing the 8 cities. The tour begins September 7th! Here is a list of dates and cities and SUPER HOSTS!!

Q. As a singer-songwriter yourself, any of your songs present in The Space Between?

Our soundtrack for the film is incredible! With some really awesome indie bands!! Check it out!

I have a song of mine called Cracker Jacks that plays during the credits of the film.

Q. How’s the Festival circuit for The Space Between been like?

We had an amazing festival run! Screening at over 12 festivals with our world premiere at The Shanghai International Film Festival in China and ended with Gina Davis’s film festival for woman & diversity Bentonville Film Festival.

Q. Any actor and/or actress you want to direct?

Oh! There are so many wonderful actors I’d LOVE to work with. The first two that come to mind are Maggie Gyllenhaal and Holly Hunter. Both such interesting actors.

Q. Actor and/or Actress you want to act with?

Why Meryl Streep of course.

Q. You made a couple of short films. Really enjoyed “Lines” especially due to its subject matter that’s still very relevant with regards to how people and media portray women and age. Any new short films you’re working on?

I’m actually heading into a directors program at The Canadian Film Centre here in Toronto. We’ll be workshopping a number of short films during the program. I’m working feverishly on my next feature film at the moment though. The working title is Breaking Emma and it’s about an aging Hollywood actress who in the wake of her mother’s death takes a spontaneous break from her pursuit of fame to visit Montreal after meeting a refreshingly attentive man who inspires her to deal with her grief. 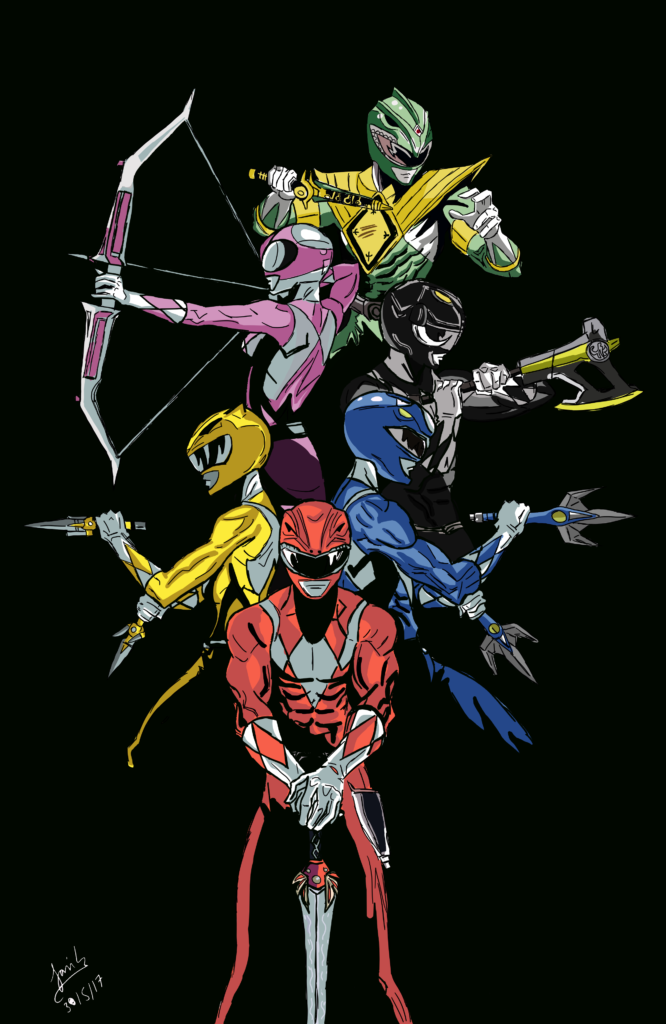 Q. There was an online video of you interviewing some of the new cast of Power Rangers. Was that the first time you met them? They definitely looked star struck.

I met the entire cast in Vancouver last summer while filming the cameo. They are a lovely bunch.

Q. With a surge in popularity for Mighty Morphin Power Rangers have you kept track of Kimberly? She was the first of the Rangers that got a six-part solo comic book series that took place after she left the Power Rangers. Turns out she can still morph into the Pink Ranger through Zordon’s sword, and also share her energy with others to make them Rangers too.

Boom! has sent me the entire series of comic books! Very fun stuff.

Trini, the Yellow Ranger played by Becky G is coming to terms with her sexuality in the new Power Rangers Movie. The reaction to that has been very positive especially from fans who remember the unfortunate events involving David Yost. Any opinions about such a change, making one of the main characters a lesbian, and that too in a feature film?

Q. Speaking about change, screenwriter’s Max Landis’ rejected script for the new Power Rangers movie got leaked. It had Kimberly as the Black Ranger and the team’s awesome main fighter, and Zack as the Pink Ranger. Any thoughts about a male character becoming a Pink Ranger?

Ha, not sure what that was all about but I think it would be awesome to have a male Pink Ranger.

Q. As a director what do you prefer? Telling stories that are smaller in scope and relatable or would you like to direct an action-packed huge film like what Disney’s Marvel has been up to?

My main genre is ‘heartfelt’ comedy. I love taking painful situations in life and finding the levity within. I think the only way to surface through is laughter. Although I  am very interested in expanding that as I grow as a director.

Q. If offered would you be up for directing a Power Rangers movie?

Thank you so much for your time, Amy Jo. Head on over to The Space Between official website for screenings. It will be released online this September 2017!

When Mitch (Michael Cram), a proud new father, discovers that his baby isn’t his, he leaves his small-town and sets out on a journey to find the baby’s true daddy and ultimately what it means to be a father. Meanwhile, Jackie (Sonya Salomaa), the baby momma, reeling from her decision to take her pregnancy into her own hands, convinces her best friend to help her find Mitch and save their marriage. The journey they all take is a heartfelt, coming of age (a slightly older age) through backwoods burlesque festivals and small town funeral-home larceny. Filled with a hilarious and moving cast of supporting characters, The Space Between is a film about acceptance, family, love… and a few dirty diapers.

As for Amy Jo directing a Power Rangers movie, make this happen Saban and everyone involved. Talks about a sequel are reportedly taking place. Get an actual Power Ranger to give the movie the feel and direction the reboot was missing.

Have you watched The Space Between? Feel free to share your thoughts.

Previous:“Do You Take This Man” Gets July Theatrical and VOD/DVD Release Dates
Next: Neo-Noir Feature Film ‘Residue’ Releasing on VOD in US and Canada on July 18, 2017