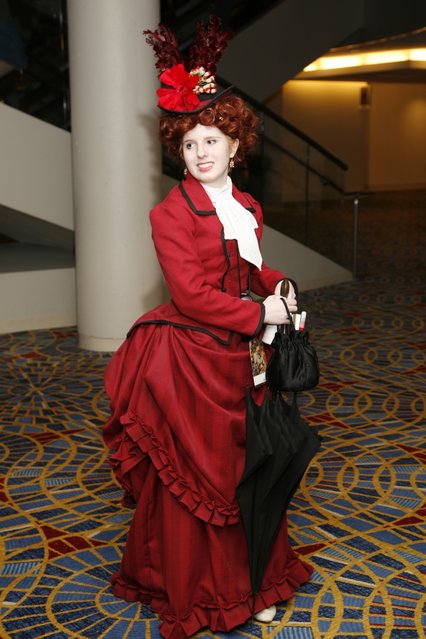 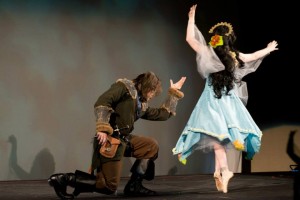 It’s week #2 of The Geekiary’s Summer Cosplay Series! Today I bring you featured cosplayer Gann, another Atlanta native, who began her cosplay endeavors with a focus on historical garb and has long since branched out to everything from anime to Game of Thrones. She’s studied food microbiology and special education, and in her free time – the free time that exists outside of cosplay, that is – you can probably find her drinking good beer or practicing Irish dancing or ballet.

G: I’ve been sewing and crafting since…2007, and it was probably [in] 2009 that I actually started doing proper cosplay. In January of that year I found out that a bunch of my friends were going to a con just the day before the event, so at about 11:30 that night I decided to go! I packed up one of my Victorian dresses and hopped on a bus to Boston the next day. I had no idea where I would be staying, what I would be doing, or how the hell I’d find time to finish the term paper that was due as soon as I got back. I’m a native Atlantan, I had been to Dragon Con a few times, and at the time I was an impulsive college student, so it seemed like a good idea.

There were a few other cons I went to that year just wearing historical garb…it never occurred to me to actually dress up as a fictional character until that summer, when I discovered Kuroshitsuji and decided that a period-correct take on Madame Red simply had to be done.  It actually took me a while to branch out of my comfort zone of Victorian, steampunk, or otherwise Victorian-inspired costumes.  There were a few years there when I honestly thought that everything designed after 1901 was just ugly, unflattering, and boring.

G: I’m in it for the fabrication, man!  As I said before, I originally started sewing for historical dress, so the transition to sewing for cosplay was so natural that it has never crossed my mind to commission or buy pieces.  I’ve learned a lot of new skills for cosplay, too.  I used to go out of my way to avoid things like props and armor, but I’m slowly starting to get more comfortable with it.  To be honest, I’d still rather be sewing and find most other parts of the fabrication process to be tedious. 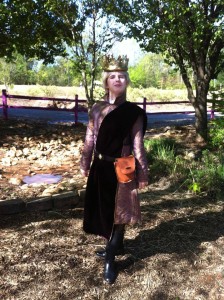 G: To wear: Joffrey Baratheon.  I don’t usually go for the most instantly-recognizable characters, but clearly this was one exception.  The first time I wore it at the Ren Faire this spring, people (including the Faire’s paid actors) bowed and called me “Your Grace.”  It went to my head a bit, but this costume always gets a reaction…sometimes a bad one, but that’s fun too.  Also, somewhere on the internet there is a video of me Irish dancing (badly) in this costume…

To make: This is a historical one…the pink dress from the James Tissot painting “Too Early.”  I call it The Pink Dress of Doom because it’s got about a mile (not exaggerating, I did the math!) of baby pink organza ruffles, and it broke the ruffler foot I used to have.  I spent an entire summer sewing tiny rolled hems and ruffles, and I swore I would never sew another ruffle again.  That lasted about a month.

G: I can’t pick one! My dream costume changes based on the weather, and if I’m dying to make something, dammit, I’m gonna do what I can to make it happen.  That said, what I really long to make right now is another historical piece: 1870s ballerina like in the Degas paintings.  It’s partly because of the beauty of the designs, partly because I’m a dancer and like being able to combine my hobbies, and partly because my artist friend said that if I pull this off, he’ll paint me in oil. The real obstacle right now is the research part; it’s been exceedingly difficult to find any resources on what dancers actually wore back then, and a painting can only tell you so much.

G: Not terribly much, but each year I participate in Arisia’s tactile tour masquerade, and I was one of the people who spoke up to show support to help make it happen.  The past three [or so] years we’ve had a tactile masquerade. During halftime, while the judges make their decisions, the people who participated in the masquerade can choose to allow people to come up and feel their costumes and props.  It’s intended for people with visual impairments, but anyone who wants an up-close look is welcome.  Arisia has had something similar for their art show for a while, so I think it’s incredible that they’re also trying to make cosplay accessible for people who can’t enjoy the costumes from a distance.  I’m legally blind myself, and I’m in grad school for special education, so I love seeing creative ideas for giving more people a chance to participate in more activities.

One idea that I had – but so far haven’t had the chance to put into motion and do something like the tactile masquerade, on a bigger scale – involves Atlanta’s Center for the Visually Impaired, which has a lot of community programs for kids, teens, and adults with visual impairment. Atlanta also has a lot of cosplayers, and I think it would be neat to bring them together and give the individuals served by CVI the opportunity to touch and interact with costumes.

G: Just a little bit.  I’ve got a few abandoned blogs in various corners of the internet, I’ve judged the Joss Whedon costume contest a few Dragon Cons ago, and I’ve also done panels at a few cons (with topics ranging from beer to blindness). Every time, though, I leave a con thinking “Wow, those panels were not nearly as enjoyable as I hoped.  I think I’ll sit out next year,” and then I get roped back in. 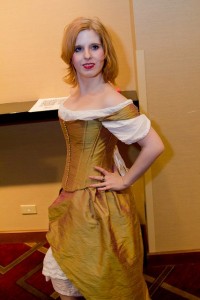 G: It definitely did!  I was first approached about doing a panel one MomoCon when I was wearing an 1820s inspired gown and talking with a fellow from Dragon Con’s Alt History track who said he needed more historical sewing people like me.

G: It’s a toss up between Dragon Con and Arisia.

Dragon Con has the excitement of a huge event, yet it still has a friendly atmosphere.  You will see the most incredible costumes ever, and the party scene can’t be beat.  Yeah, I don’t mind saying that I love to party 🙂  It’s non-stop, there’s something for everyone, and seeing the event take over downtown Atlanta is truly amazing. I go downtown often, and it truly is an amazing transformation and an amazing burst of energy that this part of the city doesn’t see very often.

Arisia is a whole other creature.  If Dragon Con is the high-energy packed nightclub. then Arisia is the comfortable pub where everybody knows your name.  I’m not exaggerating – Arisia is tiny and super friendly! It feels like a small New England town in con form, and I LOVE small New England towns! Everyone’s friends there, and since it’s a small con, it’s really easy to find people you haven’t spoken to since the year before and pick right back up.  It doesn’t hurt that it consistently has one of my favorite masquerades!

G: Don’t be afraid to fail because failing is an unavoidable part of learning something new.  You will make mistake.  You will make frustrating mistakes.  You will probably make expensive mistakes.  However, none of these are worth giving up over.  Use your stumbling blocks as an opportunity to learn – put the piece you’re working on down for a few hours (or days), do something else, and come back when your mind is fresh and your frustration has cooled down.  I have a few friends who get themselves so stressed out over making their costumes, and it just doesn’t seem worth it.  This should soothe your stress, not increase it! 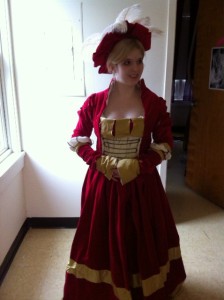 G: I’d change the minds of anyone who thinks you need to be the same size, age, gender, or race as a character.  It’s a pretty nasty attitude to have, and it’s completely petty.  I mean, the character isn’t a real person, but the cosplayer is.  On a similar note, I’d like to erase any self-doubt that cosplayers may feel, whether it’s over their appearance or over their skills at making costumes.  A hobby really isn’t worth beating yourself up over.

G: The Sunday of Arisia 2014 was meaningful and memorable in many ways.  I know I’m going to start tearing up as I write this, so here it goes:  It all started last spring when I decided that I wanted to plan Beren and Luthien from The Silmarillion for Arisia’s masquerade. Simple enough. That summer – close to a year ago now – two friends of mine (New England costuming superstars), Marty Gear and Wombat passed away.  Wombat was a HUGE Tolkien fan, and Marty was an incredible inspiration to me. Through the process of making the costumes and planning the presentation, I couldn’t help but keep the two of them in mind.  I kept thinking of how weird Arisia would be without them, how much I wished I could share these new costumes with them, and most of all how much I wished more of my costuming friends could have had the chance to meet them.  The guy who was my Beren probably lost count of the times I said “God, I wish you could have had a drink with these awesome guys!”

Anyway, that Sunday Arisia hosted a panel to honor their memory (another thing that goes to show how tightly knit the Arisia community is), and that Sunday was the masquerade where we debuted Beren and Luthien.  I never told anyone this, but when I stepped onstage I carried my memories of them in my heart.

You can find Gann and more of her amazing costumes on Facebook at Historicity Design.

See you next week with another new cosplayer interview!