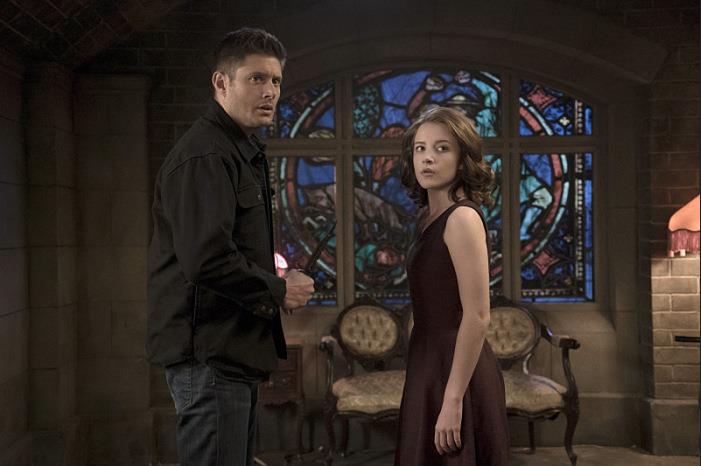 Supernatural has actually been rather good this season, so considering who wrote the episode, I watched with certain expectations. In hindsight, that may have been a mistake. But like the Winchesters and Cas, I’ll try to get over it.

Overcoming your mistakes, fears and limitations seemed to be the theme of the episode. Each character that serves as a focus in the episode struggles to overcome the memories and feelings that restrain his actions. Although Sam and Cas are successful, Dean and Crowley are not. I find it interesting that both of the unsuccessful attempts occur to the characters in close contact with the Darkness, the representative figure of chaos.

Sam spends his time in the episode fighting against the series-long tendency of the heroes to just kill all the enemies rather than exorcise them. This tendency leads to one heck of a body count, and I was pleased that Sam is continuing to try to follow the renewed group policy of trying to “save the meatsuits” he espoused in the season premier. He doesn’t manage to save everyone, true, but as he points out in the episode, two out of three ain’t bad.

Crowley admits in the episode to being unable to kill Dean despite wanting to. This is mirrored by Dean’s repeated unsuccessful attempts to kill Amara. Both are restrained by conflicted feelings; a sense of being connected to the target. Crowley attempts to overcome the restrictions, but fails when Amara intervenes, an act that results in Crowley being badly injured and losing his power over her. Will he be able to correct for this in the future? Dean also fails in his attempts to kill the Darkness. Will Dean succeed in the future where he failed tonight? Will Crowley help him, or try to stop him? Either way, Crowley is in way over his head. Jury is still out on Dean.

Cas is shown having to put some significant effort into overcoming the stresses and aftereffects of actions, both of others and of his own, from recent seasons in order to do his tasks. I’m quite pleased that the show has decided not to ignore the residual damage such traumatic events can inflict on people. The continued focus on the consequences of past events lets me continue to hope that the characters and the show have indeed learned at least some lessons from the past, and will attempt to understand and avoid them in the future.

Speaking of the Darkness, she’s shown going after a disaffected teenage girl, while being effectively labeled as a “difficult” teenage girl herself throughout the episode. This is the first time this has happened. Why the change? It’s not like she was shown going after children last episode. Previously, her targets seemed to be fairly random targets of opportunity. Was the teen girl just the closest person, or has she started getting selective? If the latter, why? And is that the reason she turned down Crowley’s snack, or was that to be contrary?

There was a great deal of visual mirroring in the episode. Sam, Dean and Cas were mirrored during the action scenes, but the most interesting part was the mirroring of Metatron and Amara. Both are strangers in a strange land; individuals trying to adapt to a world that is not their own. Both are surviving by preying on humanity and by taking things of great value from others, but while Amara seems to be doing well, Metatron is not so much.

Metatron finds being human too hard and degrading and begs Cas to end him, to let him opt out of the challenges of d 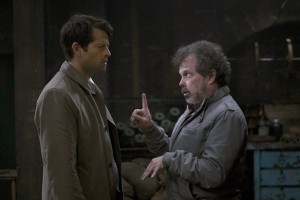 ay-to-day existence. I found it remarkably satisfying that the one angel who most proclaimed his superiority over both man and Cas is having such a hard time, while the angel that canonically loves humanity actually made a fairly decent human while on his own. Karma might be a bit weak in the Supernatural universe, but at least it seems to have hit one of its deserving targets.

While Metatron is doing poorly, Amara seems to thrive on life and seeks to make the difficulties of life no longer matter for anyone. Metatron was beaten and released by his opponent, while Amara was the one to do the beating and releasing. It’ll be interesting to see how the parallels develop over the season, and if they deviate further.

Supernatural has decided to take a big step and veer away from the traditional path of biblical lore by deciding to connect the Darkness to God in a unusually close way. The role the Darkness took in creation has interesting implications for the universe. Will her presence unmake things? Is that what she wants to do? Can the archangels stop her if let out of the cage? If let out, what’s to stop them from killing everyone after they stop the Darkness? I can’t see this ending well. I also can’t see how they’re going to get out of this without God himself coming out of hiding. I can’t wait to see how they handle that.

There’s far too many questions up in the air, and not enough explanations yet this season. What’s with the mark on Amara? Is it important, or is it just an identification mark? How exactly is she bonded with Dean? What effect does that have, if any? Does it equal Cas’s bond with Dean, or is it of another type entirely? Will Dean have to choose sides between Sam and Cas or Amara? Hopefully, they answer these soon.

The episode itself suffered from issues with uneven tone. The portions with just Crowley and Amara seemed much slower and less interesting then the scenes involving one or more members of Team Free Will.

Great flashback of the cage, though. I can’t wait to see where they go with that.

One part of the episode did make me rather uncomfortable. The part of the episode where Amara was monologing at Dean still comes across as aggressive and very uncomfortable, and that’s only made worse by the fact that she’s currently in the form of a young teenager and only technically a few weeks old. It may be, as I’ve seen argued, that it’s supposed to be representative of a parent and child relationship. However, the tone comes across in the episodes in a much darker and intimate way. If they’re going for a parental vibe rather then a sexually-influenced one, they should really reconsider the dialog and direction choices.

The choice of song at the end did not help matters, in my opinion. I know it was likely meant to be affirming of the character and her rapid growth and new-found independence and all, but it gave it more of a “creepy and inappropriate” vibe instead. It didn’t help that the only female characters were Amara and a pair of rebellious teenagers/victims. Try again, Supernatural. And this time, think twice about how it comes across to the viewers.

I had higher expectations from an episode by Robert Berens. However, this episode was still fairly entertaining, and if the episode is the worst the season gets, I’ll still be quite pleased with the season overall. Hopefully, I won’t be disappointed in the future. I’ll just have to make sure I learn from my mistakes, and keep my expectations in check for the rest of the season.