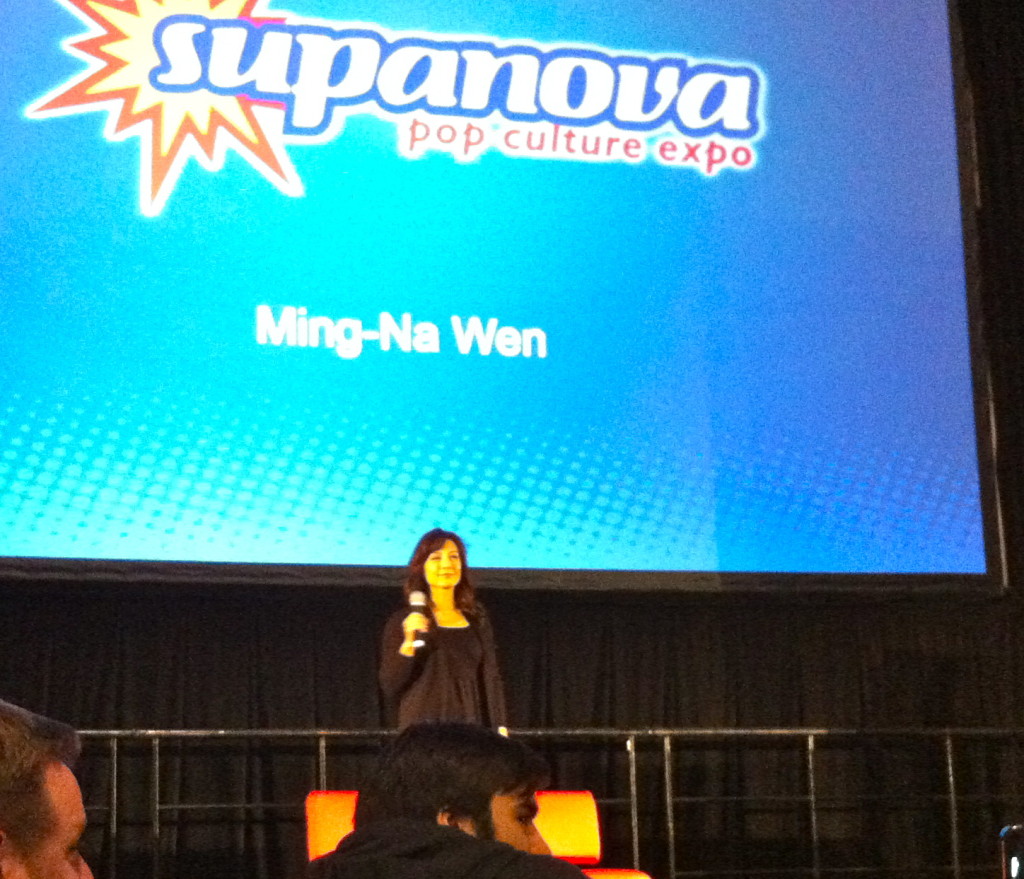 The first glimpse I had of Ming-Na Wen at Sydney Supanova Epxo was when she crashed Stan Lee’s panel just to give him a kiss on the cheek. That right there was basically enough to make me love her – and then she took the stage on her own, and I was lost. But enough about my ever-increasing crush on both Ming-Na and her character Agent Melinda May…let’s talk about what she had to say about Agents of S.H.I.E.L.D., social media, and a Stargate Universe movie.

When asked what her favorite fight scene was from Season 1 of Agents of S.H.I.E.L.D. she said, “Oh that’s a tough one. There are many. Of course I have to say the last fight scene with Ward because he needed his butt kicked really bad, and you know, NAIL HYDRA!” Later when an audience member revealed a major spoiler from the season finale, Ming accused him of being Hydra. I’m actually hoping this becomes a thing, that everyone in fandom who acts like an ass is accused of being Hydra. Can we make this a thing?

Her favorite line from Agents of S.H.I.E.L.D. is when “May nonchalantly says, you know, ‘Wheels up in 5.’ Because if any of [you] have ever been to an airport, you know it takes a while to get the plane going, but I just love how she can just you know, do it in 5 minutes.” This doesn’t surprise me a bit, because I’m pretty sure that Agent May is magic.

As we head towards Season 2 Wen said that she’s not sure where they are going to take Coulson as director of S.H.I.E.L.D, but she is excited “to be now the right hand woman to Director Coulson.” She’s also hoping for a lot more Marvel characters to turn up in Season 2. “I want to hang out with Robert Downy Jr’s Iron Man, and Thor, you know how much I love Thor.” Don’t we all love Thor…especially his arms. His arms are amazing.

In regards to the negative fan reactions to the beginning half of Agents of S.H.I.E.L.D.’s first season, she said, “Why do you think May looked so pissed off? In the first half of the season, all the time. Being a geek girl myself and knowing how comic book fans…know their stuff…they know their shit, right?” She noted that the way Agents of S.H.I.E.L.D. was marketed might have given fans the wrong idea about what to expect. “A lot of people were expecting superheroes and…the title of the show is Agents of S.H.I.E.L.D, which I thought was kind of obvious, that it’s not about superheroes, it’s about [the] agents of S.H.I.E.L.D., and they’re just normal human beings with special skills.”

That confusion extended beyond the fans because “It was really really tough to sort of find that balance, and then ultimately what we the actors didn’t know because they don’t tell us anything. Marvel is exactly like S.H.I.E.L.D., by the way. There is a hierarchy of what you should know and what you can’t know. And for the actors we knew only the next script that came along. So when we found out that our next episode was very very much tied in to Captain America: The Winter Soldier, and that there was going to be the demise of S.H.I.E.L.D., it was a shocker, and yet at the same time it was what they – the producers and the writers – had to work around the first season.”

It’s a reminder that what they’re doing with Agents of S.H.I.E.L.D. really is new territory, but most people seem to agree – myself included – that the show really found it’s feet during the second half of the season. Hopefully they can maintain this momentum going into the second season.  Ming-Na said, “What’s really nice is that you guys stuck with the show, and we got our pacing, and our story lines are now all intertwined. It’s all connected and it’s fantastic that we have your support because it seems like the general opinion is we’ve turned it around and we’re actually doing what you guys want.”

For any Stargate Universe fans out there, Ming said that she was really sad when the show was cancelled after Season 2, because the characters were left floating off in space without an end. BUT she also said that “hopefully there will be a movie maybe down the line. Kind of like, you know, what happened with Firefly, to finish off the series. So we’ll see.” If that wasn’t a call to arms then I don’t know what is.  And you know what they say, if you want something done you have to do it yourself. So get on that, Stargate Universe fans!

The most interesting thing that she said during the panel – for me anyway – was when she described social media as a kind of live theater. “When you’re working on a set, and you’re working in an enclosed environment, and in such a secretive environment as shooting Marvel’s Agents of S.H.I.E.L.D, it’s so nice to get that immediate feedback…to actually hear or read the feedback from our fans as they react to the episode that’s airing. So for me that’s a little bit of live theatre.”

As to whether or not she would like to appear in the any of the Marvel movies? “You know, I’ve been asked that question so many times, and it’s almost like when if you were asked ‘do you want to win a million dollars?’ The answer is so obvious. I would die. I would love to be in any of the Marvel films. So I’m waiting for Joss to fricken give me a phone call. Maybe I should break his legs huh? Or at least threaten to. No, it would be amazing if any of us got to work on the films.” It is a pretty silly question!

Finally, anyone that loves a good gag real should get excited for the Agents of S.H.I.E.L.D. DVD/Blueray release because it sounds like it’s going to be a good one. “You can tell I’m a little verbose, like, I like to talk and I love to laugh and I get the giggles all the time.” She also apparently bursts into a made up language Clark Gregg calls ‘Minglish’ whenever she forgets her line. I can’t wait to see that DVD – it’s also nice to know that I’m not the only one that spends hours online watching gag reels. Ming gets it. Ming gets me. I just love her, okay? And I am now so very excited for Agents of S.H.I.E.L.D. Season 2. Here’s hoping Melinda May beats up Ward some more. NAIL HYDRA!