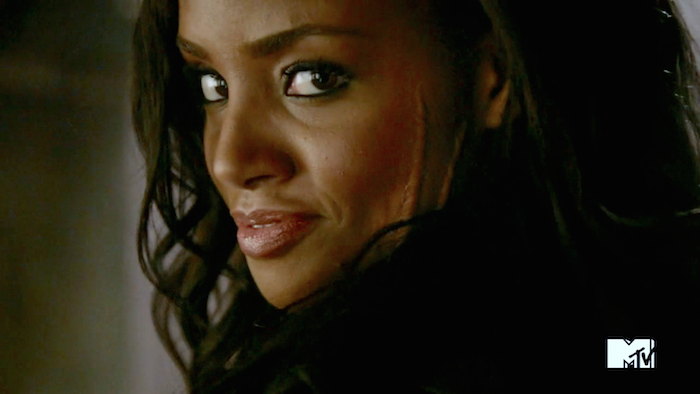 Once upon a time I had a dream that Beacon Hills would one day be populated by a plethora of badass ladies. That dream just might come true. Not only do we get a “trio of powerful women” (Kira, Malia and Lydia) but Meagan Tandy’s Braeden will, according to TVLine, be seen in nine out of the twelve episodes of Season 4. How awesome is that?

Braeden first appeared in 301 “Tattoo” where she rescued Isaac (Daniel Sharman) from the menacing Alpha Pack (remember when the Alpha Pack were supposed to be scary? Hilarious). She was then seemingly killed by Deucalion (Gideon Emery) – adding to the increasing number of dead female characters on this show. But it turned out Deucalion was the most benign bad guy ever so Braeden wasn’t actually dead, she just got a cool scar for her troubles and a new boss. Deucalion hired her to rescue Derek (Tyler Hoechlin) from some nasty hunters with a chainsaw in 314 “More Bad Than Good”.

Now she’s back and I don’t know if she’s badder than ever but I like to assume she is. Apparently she’s going to be hired by Derek and Peter to help locate Kate Argent (another badass – albeit completely evil – female character that is returning to Beacon Hills this season). The brief glimpse we saw of Braeden in the trailer showed her fighting along side Beacon Hills friendly neighborhood True Alpha, Scott (Tyler Posey) and getting VERY close to Derek, which I’m super excited about. Let’s face it, despite being a morally ambiguous mercenary, Braeden is definitely a step up in the love department for Derek Hale.

To be honest, when it was announced that Meagan Tandy was be returning I wasn’t expecting a lot, so I was pleasantly surprising to find out that we will be seeing so much of her. I’m a huge fan of sexy, sassy characters with moral ambiguity so I’m excited to see where they take her.

What do you think? Are you excited for Braeden’s return?