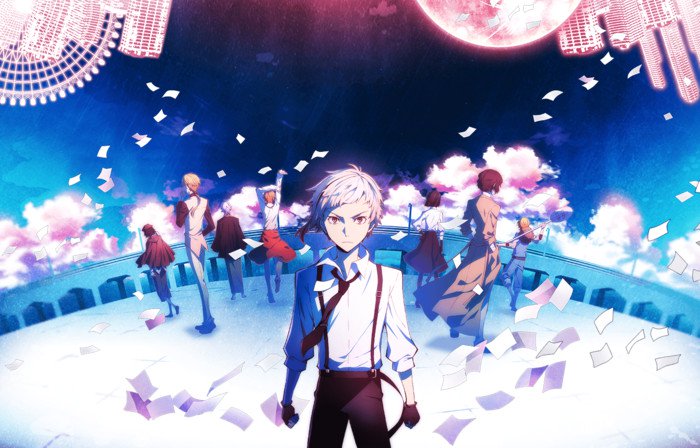 Tales of the Lost, marketed as an “ability fling puzzle game”, is a mobile puzzle RPG that is free-to-play (with in-app purchases) and available for iOS 8.0+ and Android 4.4+. The first mobile game for Bungo Stray Dogs, it expands on the world from the anime and manga with brand new interactions, side stories, and scenarios that are exclusive to the game. Make your own teams and use each character’s unique ability to turn the tide in battles that were never before thought possible.

For those who may be unfamiliar with the story, it has been summed up on the website:

Driven out of his orphanage, on the very brink of starvation, a young Nakajima Atsushi meets with a peculiar group…

Legends say they specialize in the kinds of tasks not even the police or military will touch.

In the fictitious city of Yokohama, agents take the names of literary greats and with them make sparks fly.

The pre-registration campaign, which launched June 18, features several rewards depending on total number of players who register for the release, including tickets to obtain characters and something called “ability stones”. For example, if 50,000 players register, it unlocks an exclusive SR Nakajima Atsushi featuring original Japanese voice acting.

Here are all of the campaign milestones:

A release date has not yet been announced, but you can pre-register at the official website.

Let me tell you, I’m not a huge fan of mobile games, but I may have to sign up for this one. I love Bungo Stray Dogs (have you read my review of Dead Apple?) and I’m very tempted by the promise of new content.

Will you be signing up for Tales of the Lost?