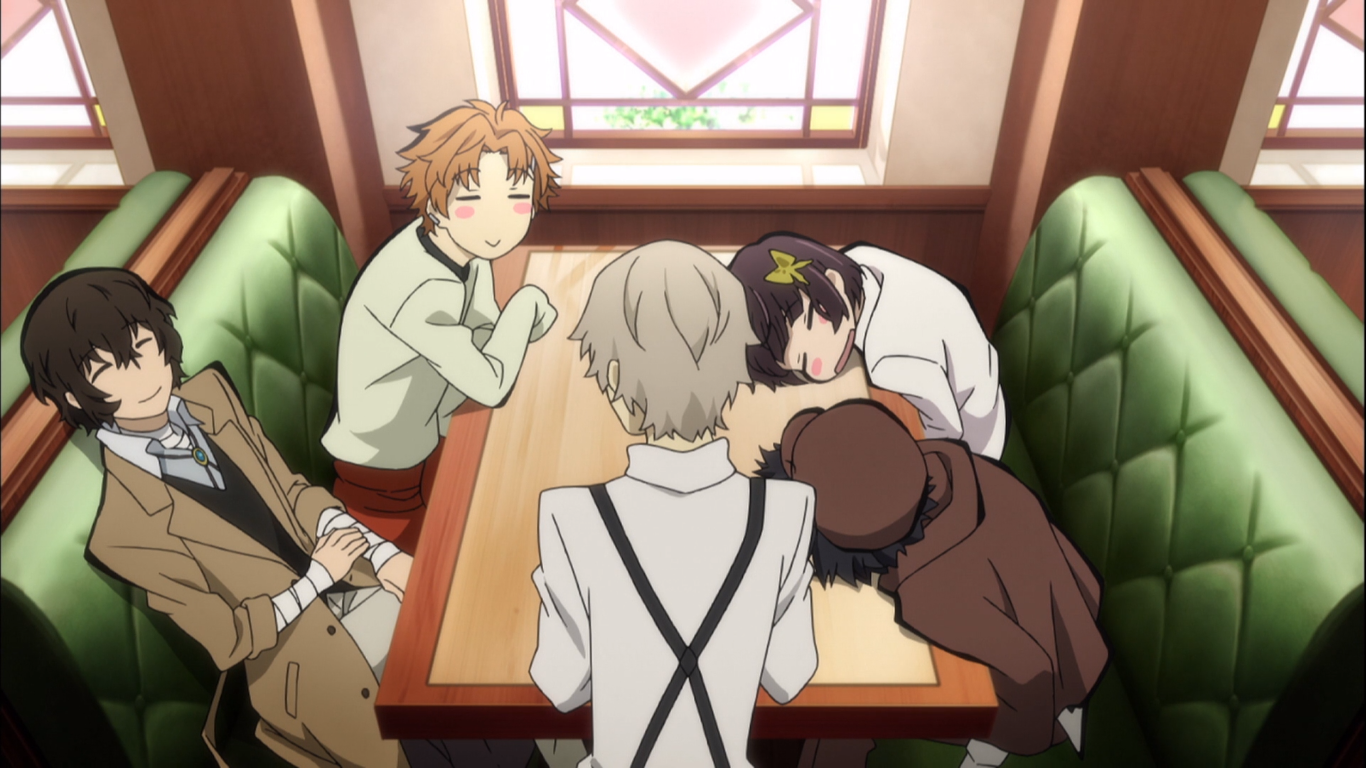 The first story in “Slap the Stick & Addict” has a small-time gang trying to pick a fight with the Armed Detective Agency by messing with their favorite coffee shop, while the second story revolved around Kunikida and Atsushi attempting to help a noted hacker (and former member of the ADA) regain his abilities. In each, we got to see our mains cheerfully causing mayhem and destruction.

I’ll admit, I thought that the first story was going in a much darker direction than it ended up. Anything to do with fingernails gives me the heebie-jeebies so I was extremely unsettled by a few of the scenes. That said, I was pleasantly surprised that the “mystery” around the gang (The Park – perhaps they should rethink that name) was solved in about two seconds; it serves as a good reminder of what everyone’s abilities are, just in case anyone had forgotten. Also, it shows how vital it is to never mess with anyone’s coffee shop. 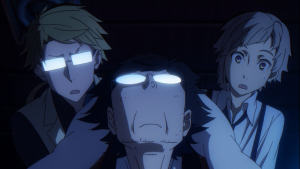 Kaita is, I believe, sticking around throughout the season, so this was an…interesting way to introduce him. I’m curious that his ability is called “Futon” – implying that the futon is a necessary piece for him to perform his ability, like Kunikida’s notebook – but that seems to just be a psychological barrier, as he’s able to control technology perfectly well later in the story after discarding his futon. (Also, wasn’t that just a blanket and not a futon?)

Now, I’m not sure which part of this story was more disturbing – Kaita “falling in love” with a woman he only saw from afar and being so consumed by it that he was unable to perform his ability, or Higuchi literally chasing after that same woman with a gun simply because she saw her speaking to Akutagawa? I think I’m going to with Higuchi attempting to gun down the woman, who turned out to be Gin…and Akutagawa’s sister. (I think I need to rewatch seasons 1 and 2. I have forgotten so much. Also, it’s a good thing I never Googled Gin before, because her last name is right there.)

While both stories focused on other things, they were also tangentially related to the overall story arc. Lucy Maud Montgomery – one of the Guild members who survived the attack at the end of season 2 – is now an employee at their coffee ship; Fyodor Dostoyevsky is seen skulking around as well. Kunikida takes the control panel from the Moby Dick to his “frenemy” Kaita. We also learn that the Port Mafia and Armed Detective Agency bosses have both issued a cease fire of sorts, which could possibly lead to more cooperation between the two groups as the larger threat is revealed. 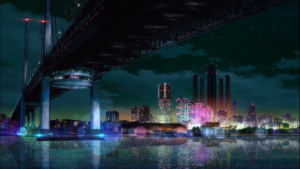 One thing I would like to say is how beautiful this show is. Every episode, I simply can’t get over how stellar the landscapes and backdrops are. It is such a gorgeous show.

“Slap the Stick & Addict” was a nice interlude between the prequel arc and the rest of the season. I’m happy to see the Armed Detective Agency again and looking forward to where the story goes from here.

Have you seen “Slap the Stick & Addict”? What did you think?

Previous:“Captain Marvel” Gets Digital, 4K UHD, and Blu-ray Release Dates!
Next: ‘Detective Pikachu’ is the Nostalgia Trip We Need