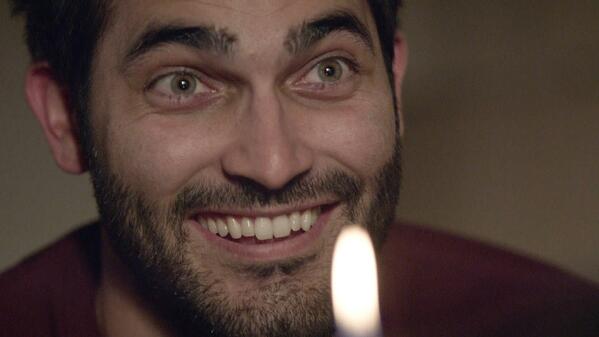 Despite being a fan favorite, Derek Hale has the emotional range of a statue that has been carved with a perpetual frown. As a result Tyler Hoechlin doesn’t really get that much opportunity to showcase his acting ability (although his eyebrows have given some impressive performances over the past 3 seasons of Teen Wolf as Derek seems to express all his emotions through them). So it’s somewhat understandable that he gets brushed off as nothing more than eye candy.

Teen Wolf fans saw more though, because the sunny, smiley guy that melted hearts in interviews is so drastically different to moody, brooding Derek Hale. That kind of transformation wouldn’t be possible without a decent amount of talent. Much of the Teen Wolf fandom came to the conclusion that if Tyler Hoechlin was given more to do than take his shirt off he would blow everybody away.

Well in the most recent episode “De-Void” Tyler Hoechlin finally got his chance to show-off and from what I saw the Teen Wolf fandom was extremely impressed (I was super impressed, he gave me chills) – and they were also kind of pissed off that he hadn’t had this opportunity before. Because if the largely female Teen Wolf fanbase can relate to anything it’s being treated as nothing more than a piece of meat when you have so much more to offer.

Please note: I’m aware there is a huge difference between the objectification of one attractive white cis male and the objectification of the entire female gender. I’m just saying we get what it feels like. And remember the assumption that fangirl tastes are based entirely on childish hormones is one of the ways that female fandom is dismissed and belittled. So ignoring Tyler Hoechlin’s talent is almost as annoying and upsetting for us as it is for him.

I’m not trying to ignore the expression of female sexuality – or deny that Tyler Hoechlin is hot, because he is very hot. Considering the way he talks about his diet and exercise regime in interviews it sounds like he works really hard to look the way he does, to which I say thank you and well done. But it takes more than good looks to get fans hooked and although it might seem like all we do is complain sometimes (we only complain because care) we really do want the people we love to know how much we appreciate them.

Tyler Hoechlin finally got the chance to do more than just walk around in uncomfortably tight pants with a frown on his face and he knocked it out of the park! Fans decided that it was about time he understood that although we enjoy looking at him, it’s actually his performance that makes us love Derek Hale. It was just so lovely to watch as my Twitter feed filled with my fellow fans complimenting Tyler Hoechlin not on his abs but on his acting abilities.

This is the side of fandom that I wish people could see, the people that appreciate talent and hard work. This is the kind of thing that deserves to be showcased, this deserves it’s own spotlight. Unfortunately I don’t have a spotlight, I just have The Geekiary. But I have to use the tools at my disposal. So here’s a sample of the lovely side of fandom that not many outsiders get the chance to see.

@TylerL_Hoechlin your acting was just so amazing in this episode!!! I have no words! Just so good!

@TylerL_Hoechlin You were phenomenal in tonight’s episode. 🙂 It was a great reminder of how talented you are.

@TylerL_Hoechlin Hot damn, you were amazing in this episode! ALL THE AWARDS!

@TylerL_Hoechlin you were great tonight! Such amazing acting. Hope you get more scenes like it!

@TylerL_Hoechlin You’re an amazing actor & a fantastic human being. You’re always so kind to fans and truly humble. Thank you for being you!

@TylerL_Hoechlin you were absolutely amazing, you’re really nailing this season but that scene… It was so good!

Everything about your acting in this ep, @TylerL_Hoechlin , was absolutely brilliant and believable. You were just- Wow. Incredible x100.

someone tell @TylerL_Hoechlin that he was on fire tonight

Still not over how great @TylerL_Hoechlin was. THAT SCENE. RIGHT IN THE FEELS.

Friendly note that @TylerL_Hoechlin is a super underrated actor, and tonight’s episode definitely proved that.

@TylerL_Hoechlin Excuse you sir, but /you/ are also killin’ it.

Previous:A “Teen Wolf” Roundtable – Part 3
Next: The Women of “Game of Thrones”: A Study on Gender Roles