“The Last of Us 2” Gets Major Spoilers Leaked! Certain Gamers Continue Being Homophobic! 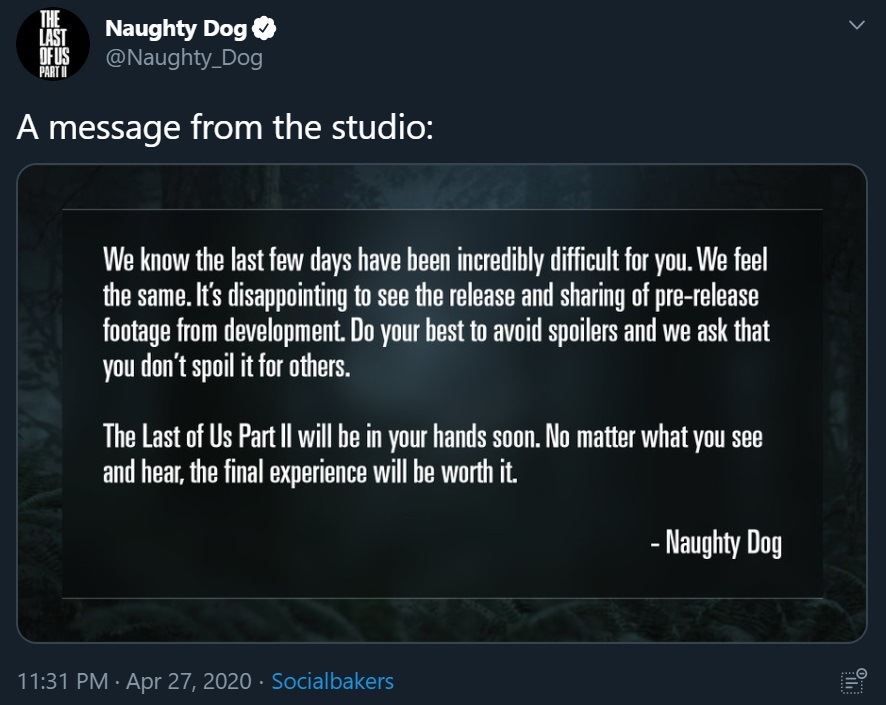 Fans looking forward to playing The Last of Us 2 have been experiencing some tough times online trying to stay away from spoilers. And while I understand the criticism regarding some of the leaked plot points, of course, certain gamers have been using the moment to openly display their homophobia.

Don’t worry. I won’t be sharing any of the major spoilers in this opinion piece.

I got to know about leaks from The Last of Us 2 a couple of days ago. Some people in the fandom were saying they weren’t true. However, it seems the leaked plot details and game footage were true. And, oh boy, a lot was shown in them!

Understandably, many fans aren’t happy with how the sequel will be treating certain characters. The first game came out in 2013 and fans have been anticipating a well-constructed sequel. They were even willing to wait a bit longer after the sequel’s initial release date was changed indefinitely. It was supposed to come out on May 29, 2020. But then the current global situation happened.

However, due to the leaks, developer Naughty Dog has been forced to share a new release date. The Last of Us Part II will debut on June 19, 2020. But now the current issue is that certain fans don’t want to play the game due to the leaked spoilers.

Other than that, there are rumors about Naughty Dog overworking its employees (without paying for overtime) and how the leaks were by an employee as payback.

I hope certain law firms look into this situation and Naughty Dog (if the rumors are true) changes how employees are treated at the establishment.

Now, while criticizing the narrative choices being made in the sequel to The Last of Us is valid, the situation is being used by certain gamers to spew homophobia.

I’m not even sure if some of the people sharing such hate on social media are even fans of this franchise. Ellie being a queer character was made very clear in 2014’s The Last of Us: Left Behind. Promotional material for The Last of Us sequel showed Ellie in a relationship with another woman.

That’s why seeing what haters are saying online makes no sense to me. It’s not as if Ellie’s sexuality was changed out of the blue for this gaming franchise to earn brownie points. Also, according to the leaks, the story features a trans character, too.

Which, again, shouldn’t come as a surprise because this franchise has been queer-inclusive from the beginning.

If you don’t like the narrative choices being made in the sequel? Fine. That’s valid. Even I think it could have been handled differently, judging from the spoilers.

But if your criticism is majorly about The Last of Us 2 having more than one queer character, well, go sit down.

Of course, haters are yelling online about the gaming industry shoving queer-inclusive agendas down their throats. These crybabies act as if every single game that gets released during the entire year only has queer characters.

All it takes is for a couple of titles, from hundreds released yearly, to feature a handful of queer characters for certain individuals to immediately use their social handles to scream about how the LGBTQIA+ community is everywhere in games.

It’s similar to the reaction TV and films receive when a small percentage decides to tell a story that isn’t about cisgender straight humans, animals, or aliens.

With The Last of Us being made into a live-action series over at HBO, let’s see if the spoilers and the upcoming release of the sequel will play a role in ruining the overall success of this franchise down the line.

Previous:Fruits Basket 2×04 Review: “I Got Dumped…”
Next: ‘Arrow: The Eighth and Final Season’ – Home Release Review