Dekkoo’s “The Third” Season 1 – Review: An Interesting Look at a Queer Three-Way Relationship 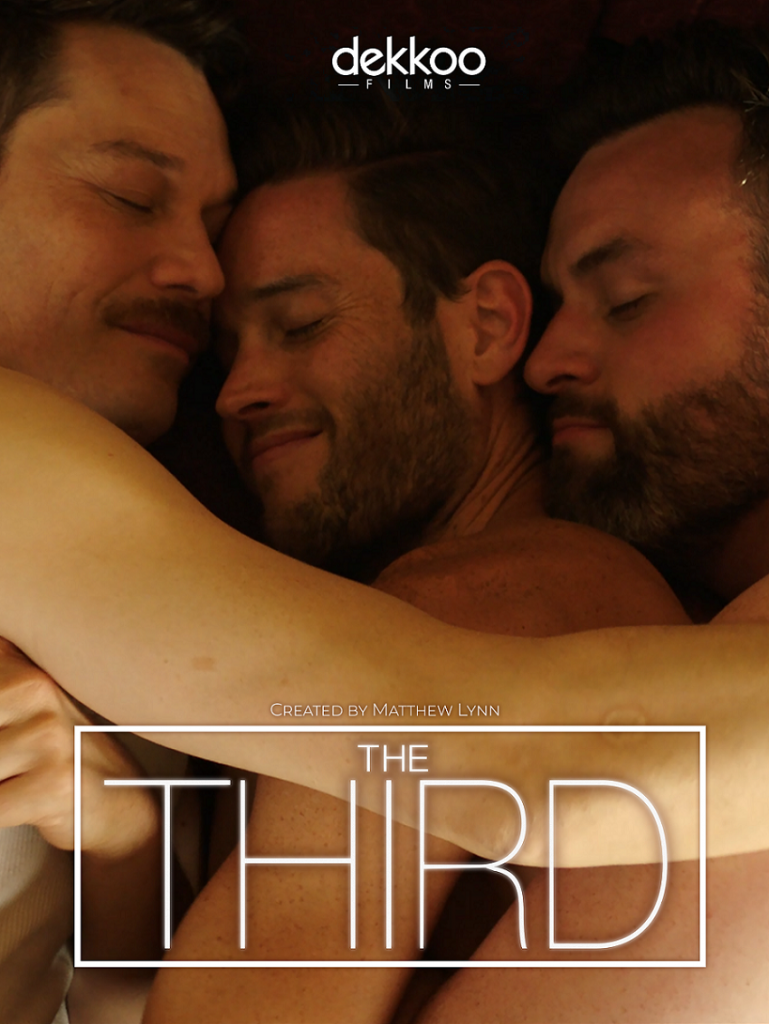 Dekkoo continues to offer some interesting queer content for people to stream. The latest Dekkoo Original Series is titled The Third. As the name suggests, it’s a story about a three-way. The six-episode long first season is full of passion, jealousy, and secrets. It gets quite dark, and I’m here for a second season!

I was provided free screeners of The Third Season 1 to review. The opinions I have shared are my own.

If you’re searching for an entertaining queer streaming series that won’t take up too much time to binge, I recommend you give The Third a try. It is currently available on Dekkoo.

A provocative new gay series, THE THIRD follows Jason (Sean McBride), a twenty-nine-year-old gay man who stumbles into a “triad” relationship with Carl and David (Corey Page and Ryland Shelton), an established gay Palm Springs couple who are on the outs after five years of marriage. Thinking that a third person might spice up their relationship, they agree to move forward with Jason… only to encounter a whole new set of complications. What begins as a passionate three-way affair is jeopardized by skepticism, jealousy and secrets. Writing their own rules along the way, Jason, Carl, and David try to figure out the true definition of love… and whether or not their new triangle is equilateral or isosceles. Part drama, comedy, and mystery, THE THIRD is the sexy and stylish new Dekkoo Original Series that isn’t afraid to cross boundaries.

The interesting thing is that series creator Matthew Lynn drew inspiration from his life. Lynn shared that after not being accepted by his family when he came out, a gay couple took him in and became his surrogate family. He later entered a three-way relationship, or (as the show calls it) a ‘triad’, with them.

He added, “As a gay creator, I want to portray gay relationships without any sensationalism or exoticism. At the same time, I didn’t want to shy away from or be ashamed of what it means to be gay in today’s world. This show is my love letter to our community and to Palm Springs, a gay mecca.”

As for my review, I enjoyed watching what filmmakers Matthew Lynn and Matt McClelland offered through The Third. After recently going through the weird three-way relationship in Why Women Kill (another streaming show), I appreciated the change of pace this series gave me. There’s still drama involved, but it was easier for me to believe.

Sean McBride does a good job playing the lead character, Jason. He’s a very anxious character, and I think McBride did justice to his role. I also liked him having a supportive father. It’s through Jason that we get to meet Carl (Corey Page) and David (Ryland Shelton).

Corey and David are married and they decide to make Jason a part of their relationship, hoping his presence might help mend their bond. I mean, if you’re bringing in a third person to fix your relationship instead of trying to handle issues beforehand, it’s obvious things aren’t likely going to work out. And that’s what we see in the first season. Carl and David’s existing issues leave Jason in a very awkward place. He understandably begins feeling like the third wheel. However, as the story progresses, we see Carl and David begin experiencing a similar feeling of being left out from the triad.

The show slowly gives us glimpses into Carl and David’s past. Such reveals help make sense of how they continue to behave in the present. However, I do think some of the reveals focused more on shock value instead of playing out naturally.

Without giving spoilers, unless these three address the issues they have, I don’t want any of them being in a relationship with each other as a couple or as a triad. That’s why I’m looking forward to a second season. I want to see where these three characters will go after the events that occurred in the finale.

Also, I do feel a lot of stuff was missing from the narrative. I understand the time restraints this series might have had (many of the episodes fall in the 12-15 minutes range), but I would have liked the three main characters to be more fleshed out. I don’t like filling in backstories myself. Show me. But if you just want to tell me, maybe make it longer than a sentence or two?

My other gripe with this show is how the story utilized Jason’s best friend, Katelyn (Fatima Taliah). Even though the actress has screen presence, Katelyn, too, suffers from not having enough of a backstory or much of a personal arc. That’s why, in my opinion, she came across as a character that fell under the ‘WOC-best-friend-who-offers-guidance’ trope we usually see in media. Here’s hoping Katelyn gets more character development in the second outing.

Having said that, I did enjoy binge-watching The Third. It’s definitely well-shot, well-acted, there are some well-written emotional beats, and the pacing didn’t bore me. And as I keep saying, I want to know more. So, you can tell I found the overall narrative to be quite interesting even though certain things could have been handled a bit differently.

Have you watched The Third on Dekkoo? Let us know.