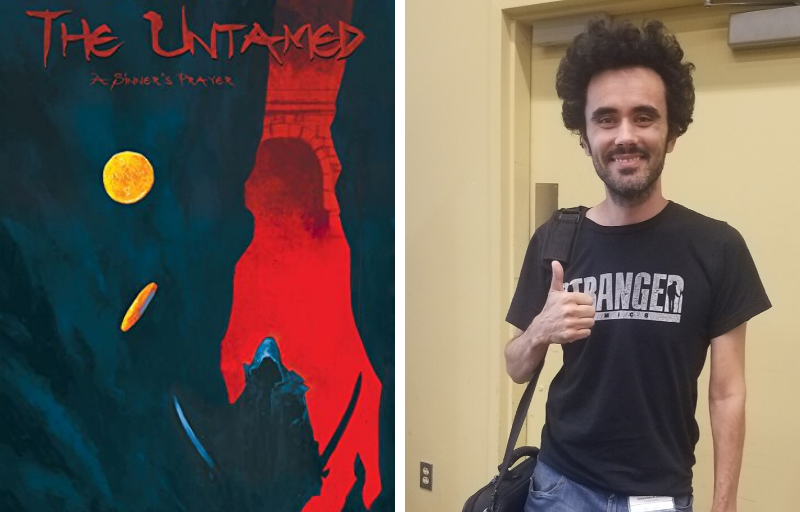 HBO announced back in March that it had picked up Stranger Comics’ Niobe, The Untamed, and other related stories under the umbrella series Asunda (named after the land where all these comics are set). Last weekend, Sebastian Jones took the stage at Baltimore Comic Con to talk about bringing Niobe to life, dealing with imitators, and how others could make their own comics.

The panel, held Sunday afternoon, was theoretically meant to be a loose workshop on taking an idea from concept to creation. Sebastian Jones has his own style, though. He did have a presentation on nurturing ideas, but he used it more as a launching point for a loose collection of anecdotes, advice, and album recommendations. (Jazz. Jones says good jazz will change your life.)

That description might sound boring. The panel wasn’t. It was interesting, occasionally uncomfortable, and above all inspiring.

Jones is comfortable in his skin and passionate about creating. That shone through as he talked about his work. The first book set in the land of Asunda, The Untamed: A Sinner’s Prayer, was written by Jones and illustrated by Peter Bergting and Darrell May. Jones wanted a different team for Niobe: She Is Life, which shifts focus from the Stranger at the center of The Untamed to Niobe Ayutami herself. He connected with co-creator Amandla Stenberg and artist Ashley Woods to bring an authentic voice to Niobe for her own book. The result is a story that feels powerful and new and compelling.

“When we went international, we were the first internationally marketed [comic] book with a black female lead, black female artist, and black female author,” he said. “No one else was doing it.” Given that the book was published in 2015, that’s a pretty stark sign of how far comics have to go when it comes to representation.

Since Niobe first appeared in The Untamed, other creators have tried to replicate Sebastian Jones’ success by bringing in their own heroes. An audience member pointed out DC’s Naomi, and Jones was amused. “Oh, is she also a young black female superhero? What does her hair look like? Oh, it’s long dreads? Wow, and what’s her name? Naomi? Hmm…”

Much as I love Brian Michael Bendis and Jamal Campbell, who are working on Naomi, and much as I’m enjoying that story, I have to admit that Jones’ approach of recruiting Stenberg and Woods for Niobe makes sense. It also resulted in a great comic that won its own TV show, so the Stranger Comics crew must be doing something right.

Jones isn’t bitter, though. When asked how creators should deal with “being copied” he said simply, “Let them. They won’t keep doing it. People are going to see your success and copy you, but they’ll stop eventually.” He talked about having sacrificed material comforts and time with his loved ones to create, saying, “No one sacrificed as much as me for Niobe. No one is going to sacrifice as much as you will for your work. They won’t give what you will to it.”

He gave out a lot of writing advice. One that resonated with me was, “Play the King like they expect you to play the Ace.” In other words, have a big moment that’s just a little shy of your grand reveal or major pivot, and put that where readers expect to see the Big Reveal. That way, when your Ace comes later it will have more impact.

A lot of audience members were keen to hear about the upcoming HBO series, Asunda, which should be coming out in 2021. Jones didn’t say much about what we can expect, but did mention that it will pull elements from all the Asunda books while focusing on Niobe. (He also mentioned that he was just about to send the first scripts to HBO, so fingers crossed we’ll hear more on that front soon!)

The heart of the panel was the presentation Sebastian Jones put together. It starts out a little sparse, mostly single questions used as a discussion prompt or art images, but as it evolves he puts more meat into the slideshow itself. There is writing advice, sure, but there are also specific recommendations for Jazz albums and a framework for starting a comic. I liked the tour of Untamed and Niobe pages highlighting recurring themes like Jones’ love of working reaching hands into the art wherever he can.

It’s something new creators might find interesting. Jones offered to send the presentation to anyone who wants to use it, an offer he’s extended to readers here as well. Just email the Stranger Comics team at stranger@strangercomics.com for your own copy.

Have you read Niobe: She Is Life yet? Who’s your dream cast for the HBO series? Let us know in the comments!

One thought on “Sebastian Jones Talks Niobe, HBO, and Finding Your Own Voice at Baltimore Comic Con”