Fans of Boku no Hero Academia may be interested in this week’s Wednesday Webcomic: unOrdinary. unOrdinary tells the story of a school of teenagers with superpowers, and the one lone boy who is simply ordinary. But John is not as defenseless as he seems. 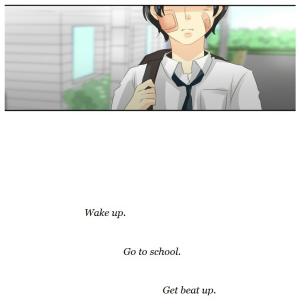 In the world presented in unOrdinary, it’s more common to have some kind of power than not; the more powerful you are, the higher your status, but the lowest of the low are the “cripples” – those poor individuals who don’t have any powers at all. At Wellston Private High School, the social elite use their status to bully those of lower status. Students with mid-tier abilities harass students with low-tier abilities, and the high-tiers just don’t notice. Meanwhile, in the world at large, a rash of vigilantes – hoping to use their powers to do good – have started popping up…and mysteriously dying. Now there is a shadow organization, a boy with a secret dark past, and a drug that somehow caused one of the most powerful students in school to lose their ability.

unOrdinary is a fun read. Aside from the fact that you know John is hiding something (don’t worry, you do eventually uncover his secret), there is so much else going on. There’s a shadow organization killing superheroes and a conspiracy at school to elevate mid-tiers. There is a lot of backstabbing, a lot of petty squabbles that maybe aren’t so petty, and great example of how power corrupts. Over 120 episodes in, and you start to realize that there is something very wrong with the society presented in this world. (Honestly, you probably realize that sooner, but now the characters are starting to understand it, too, so things should start to progress nicely from here.) 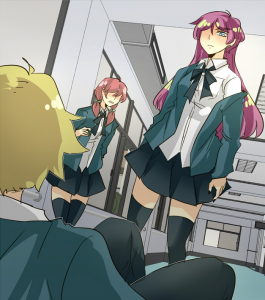 The characters are quite compelling, although you will probably waffle back and forth on whether or not you should like them. With the exception of Sera (whose pink and yellow hair is, like, the best thing ever), everyone is a jerk at some point. Some people are bigger jerks than others, some people’s jerkish behavior is thoroughly justified and kind of long overdue. A lot of this can be explained by the fact that this is high school, and high school was kind of full of jerks. But it’s also a society where your ability determines your worth, so people of higher ability like to lord it over everyone else. I, for one, am anxiously waiting for the moment when everything comes to a head.

There is some pretty stellar art in unOrdinary, particularly in the fight scenes, which I can’t even properly screencap just because of how big the panels are. (This seems like a good time to recommend downloading the Webtoon app – reading the episodes on my computer just isn’t the same.) I really like how colorful it is (speech bubbles are color-coded by characters’ hair color).

unOrdinary is a great read, particularly to binge. The updates are all fairly lengthy and worth the wait, and the story is really starting to gain some momentum. Things are happening! Big things!

unOrdinary by uru-chan is hosted by Webtoon and updates every Thursday.

Previous:I Am the Night 1×2 Review: ‘Phenomenon of Interference’
Next: Fans Think Black Widow Movie Coming Sooner Than We Expect