Wayward Sisters Gets a Spin-off, Because Sometimes We Can Have Nice Things 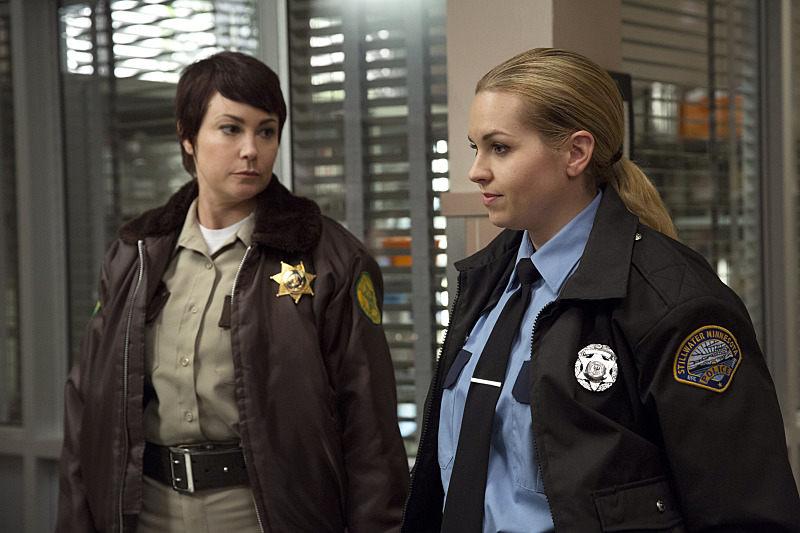 Good news: rumors are flying that Warner Bros TV and CW are finally giving fans the spinoff we’ve been asking for: Wayward Sisters, headed our way next season. Better news: the actors have confirmed it!

Deadline broke the news this morning that Wayward Sisters will be introduced via a backdoor pilot in Season 13 of Supernatural. (This is similar to how the unloved “Bloodlines” was introduced, before the studio realized it was a terrible idea and dropped it.) Wayward Sisters will revolve around a group of teenage girls who have been orphaned by supernatural activity, with Rhodes’ Sheriff Jody Mills as their leader.

Rhodes is the only actress currently confirmed, but it’s a good bet we’ll see Briana Buckmaster as Sheriff Donna Hanscum, Kathryn Newton as Claire Novak (daughter of Castiel and fan favorite), and Katherine Ramdeen (Alex Jones, who used to be a vampire nest’s pet). These four are the ones most commonly called the “Wayward Daughters”, so it makes sense to involve them.

Warner Bros and CW haven’t commented yet, but Twitter seems to be backing up these reports. Kim Rhodes posted an emotional series of tweets thanking fans for their persistence: 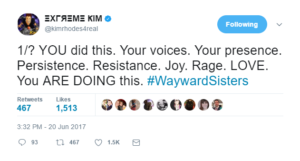 I can’t help but notice Robert Berens and Andrew Dabb being tagged in addition to her maybe-costars. Could we be so lucky? Deadline reported both are involved, along with Robert Singer and Phil Sgriccia.  Dabb is playing a little coy here but kind of confirming this: 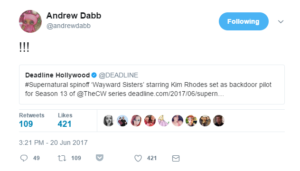 Even if Jody ends up in charge of these orphans, Donna had better be a big part of the show if the CW doesn’t want fans to riot. Briana Buckmaster seems down. 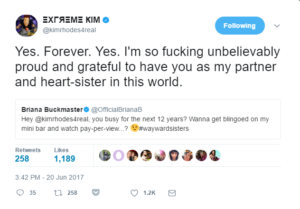 It doesn’t actually seem to matter that the CW hasn’t confirmed this, given that so many of the cast and crew are stuck in celebration mode. This has been a long time coming. The push for a Wayward Daughters spin-off has been going strong for two years now, including t-shirts, Twitter campaigns, and emails to the studios. (I’m wearing a WaywardAF t-shirt right now, actually.) To finally get confirmation that TBTB are listening to what we want… Well, it feels good.

I have one TINY criticism… If they want to go away from the “Wayward Daughters” title for whatever reason, why not just call this show Wayward? It keeps to the one-word title theme, anyway.

The struggle doesn’t end here, people. If it doesn’t get enough interest, the backdoor pilot will never actually “spin off” into its own show. Fans need to watch the episode when it airs, get a #waywardsisters hashtag trending, and whatever else they can think of to drive up ratings. Berens gave some advice for international fans who want to show their support: 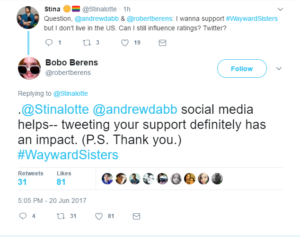 What do you think? Will you be tuning in for Wayward Sisters? Share your thoughts in the comments section below!