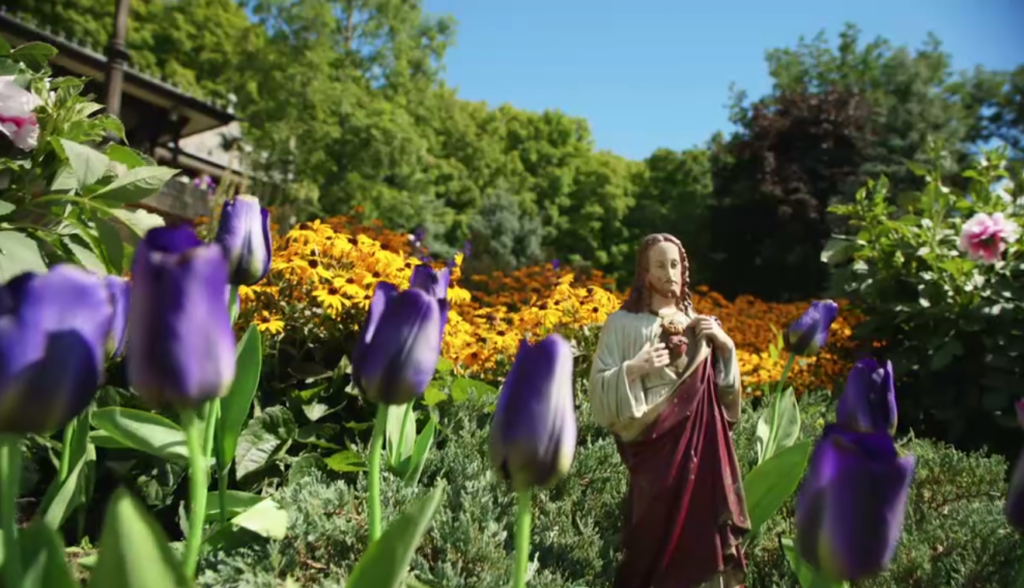 “Come to Jesus” brings season one of American Gods to a dizzying, starry-eyed close. It has everything: cutting criticisms of religion and gender issues, storytime with Mr. Nancy, Ricky Whittle being adorable…and Wednesday finally revealing his true identity to Shadow.

WARNING: This review contains spoilers for American Gods 1×08: “Come to Jesus”. A lot of them. You’ve been warned.

It was obvious from the premiere that eight episodes wasn’t going to be enough to get through the entire American Gods story. We were being given too much extra content for things to suddenly rush along to the House on the Rock, which many critics originally guessed would be the endpoint of the season. Instead, we end with Easter – which is right in line with the show’s theme of turning the new myths on their heads, so I guess we shouldn’t be surprised.

Literally the only still of Bilquis from the temple scene without nudity in it. Is artistically graphic a thing? It is now, anyway.

“Come to Jesus” opened with Mr. Nancy giving us Bilquis’ backstory. It’s not the happiest story, but it does hit some uncomfortably true notes. Women’s sexuality and power has been ground down hard for a very long time, and watching Bilquis go from adored queen to broken-hearted homeless woman hurt my heart.

Watching her make her deal with Technical Boy, I got the feeling she isn’t going to meet the same end as she does in the book. The New Gods clearly have a purpose in mind for her. That’s reinforced when he comes calling (ha) to ask for some favor we don’t get to hear. Could it be that she will be part of that fateful meeting with Mr. Universe? (I’m not explaining that – if you haven’t read the book, just wait for it.) Is this a whole extra story like the show created for Mad Sweeney? Whatever it is, I’m just thrilled to see more of Yetide Badaki. That woman’s talent has talent.

I also think Mr. Nancy knows what purpose the New Gods have for Bilquis. He tosses off a line about people judging her for making her deal, and I’m not sure if that was aimed at us or Wednesday. Maybe it was a warning? 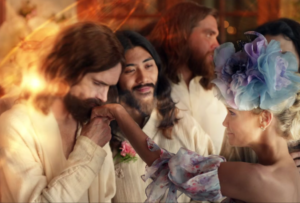 How many angry letters do you think Starz is getting about all of the POC Jesuses? Kudos to them for how they’re handling this.

Ostara carries on this theme of women’s power. She’s outwardly doing great, with hordes of people celebrating her special day, but Wednesday sees through that. Ostara isn’t actually being worshiped; she might be able to feed off the use of eggs and rabbits and chocolate in Easter celebrations, but the crowd of Jesuses gets the lion’s share of devotion.

The relationship between the Jesus pack and Ostara reminds me of young princes given the throne after their father dies, but while the queen still lives. They all seem deferential to her, though everyone else is praising them. In turn, Ostara seems anxious to keep them happy, as if worried about staying in the circle of incoming prayer power.

I was wondering how Laura could be be brought back to life with all she has to do later in the book version of this story. Turns out: she can’t be. Too bad, but then again her sturdy dead self is needed.

Mad Sweeney being called to account for his role in her death made me smile, especially because Laura was barely even mad at him. Her anger was reserved for Wednesday, who she now knows killed her to get Shadow into play. Can’t wait to see where that’s going next season! 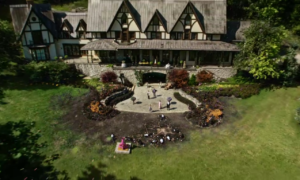 The gods giveth and the gods taketh away.

As for the final showdown – well, if you’ve seen it you’re probably as dazzled as Shadow was. The lighting, the effects, the cinematography, and above all the acting was far beyond expected for a TV show. This was a Major League performance. I understand why this season is only eight episodes knowing that half their budget must have been spent on finally showing us some visible divine power.

Of course, since Shadow has only just begun to believe, maybe the gods couldn’t exert that kind of influence in front of him until now. You have to believe before you can see, according to Wednesday, so maybe using overt powers in front of non-believers is too energy-intensive most of the time.

Ostara isn’t worried about conserving energy. Having just been given a handful of deaths as a “welcome to the war” present from Wednesday, she’s able to withdraw her blessings from the land. Trees wilt, grass dies, and crops literally curl back into the ground. “Come to Jesus” closed with the first volley in the war between the Old Gods and the New – but did Ostara strike the blow, or did Wednesday? 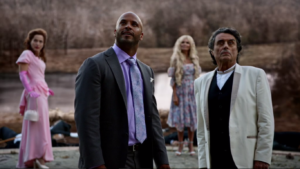 Shadow looks surprisingly happy to see Laura, given how they parted.

Next season will likely open with the long-awaited conversation between Laura and Wednesday. Will she tell Shadow he’s been manipulated? Will she blackmail Wednesday into helping her come back to life?

There are so many ways this could go, and I’m not sure which I’d like best. All I know is that this series is winning all the awards for novel adaptations.

Did you see “Come to Jesus”? What do you think? Share your thoughts in the comments section below!