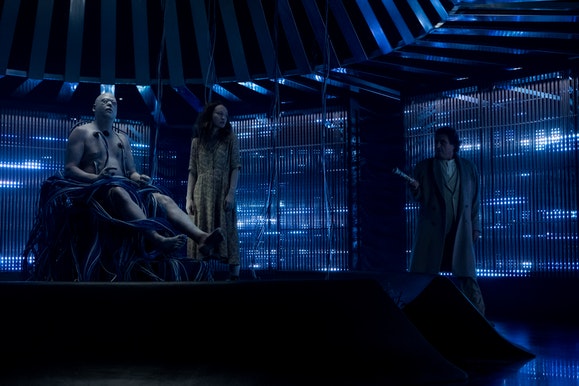 Three episodes into season 2 of American Gods and we are still plodding along towards the war between the Old Gods and the New Gods with no real gains on either side. “Muninn” features a whole lot of moving but we don’t get very far.

“Muninn” is about sacrifice; at the end of last week’s episode, Wednesday sacrificed his car in order to derail the train carrying Shadow, Laura, and Mad Sweeney. Later in the episode, Wednesday and Laura attempt to track down Argus (the all-seeing eye from Greek mythology), which requires various sacrifices – Io, in her cow form, and the Great Library of Alexandria among them. But in the end, what is anyone giving up? In the case of Wednesday, not a damn thing. Betty the Cadillac is reformed immediately after the train collision, and Laura does his dirty work in eliminating a threat only to lose another piece of her soul. 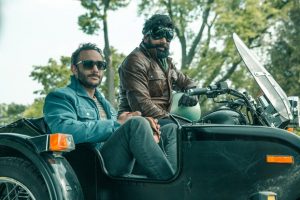 American Gods is a show that lives and dies by its characters. With a plot as slow-moving as this, its continued existence hinges on dynamic and interesting characters. But in season 2 they are starting to feel a bit flat. Wednesday and Laura’s interactions are starting to grow frustrating. Salim and the Jinn lack the sensuality and chemistry that they had in their first scenes; now Salim trails after the Jinn like a puppy while the Jinn mostly tolerates his presence. Mad Sweeney continues to be Mad Sweeney and possibly the only bright spot of the season so far, and I’m starting to wonder if Shadow is just incapable of expressing emotion.

This episode is oddly named; Muninn, in Norse mythology, is one of Odin’s ravens that would fly all over the world and bring him information. We see Muninn early in the episode, as he informs Wednesday of Shadow’s whereabouts (Wednesday having deliberately left Shadow in the train wreckage as he and Mad Sweeney took Laura to Mr. Ibis), but the rest of the time is devoted to trying to find Argus. I had thought for sure we would see more of the raven in an episode named for him. 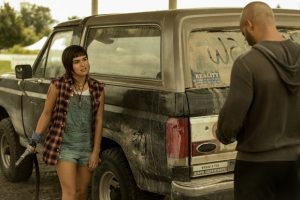 We are introduced to two “new” characters (well, one new, one old). Shadow meets Sam Blackcrow at a gas station and, in a slight change from the book, hitches a ride with her to Ibis’s funeral parlor in Cairo, Illinois. (American Gods, continuing to show actual forethought, cast a Native actress to play a Native character.) I like Sam. She is refreshing and honest in a way that Shadow needs, surrounded as he is by people who are lying to him. Meanwhile, New Media is born; instead of appearing as icons like David Bowie and Marilyn Monroe, she is constantly surrounded by emojis and talks about things like hashtags and subscribers. She lacks the style and flair of Gillian Anderson’s Media, and as it stands now, the character suffers because of it. Even Technical Boy acknowledges this (“This is an upgrade?”) but we can’t fault Kahyun Kim for it. I’m sure it’s not easy to step into Gillian Anderson’s shoes.

By the end of the episode, we’re almost back where we started. Wednesday hasn’t recruited Argus to their side and is back at Ibis’s waiting for Shadow; Technical Boy and New Media were in striking distance of Wednesday (and vice versa) and did nothing. Laura is still dead (although she has managed to slow her decay – her eyes are no longer clouded), and Shadow still has no idea what’s going on. Honestly, the only person who is in a different place is Mad Sweeney, on his way to New Orleans on the tour bus of a Christian rock band after a series of disasters that could only befall a leprechaun who’s lost his luck.

Truth be told, I’m starting to get bored. The episodes are still visually pleasing, and the music is still amazing, but the plot is dragging, the characters are flagging, and the writing is suffering because of it. We can only hope that something happens, and soon, or this show will turn into one giant snoozefest.

Have you seen “Muninn”? What did you think?