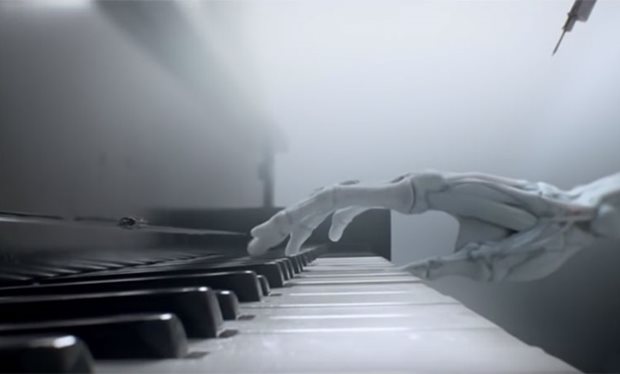 The incredible old timey Westworld music covers have been released to stream through Spotify and buy on iTunes!

There’s a lot of amazing qualities to the new HBO show Westworld.  The characters are incredible, the actors are all bringing their top performances, and the plot is so well crafted that there are hundreds of theories popping up all across the Internet (multiple time frames? William is the Man in Black? Westworld is on Mars?? I’m serious).  But the thing that I keep coming back to is the Westworld music.

The show takes popular songs from groups like The Rolling Stones, Soundgarden, and Radiohead, and plays them with an old fashion player piano set in the brothel in the show’s main town of Sweetwater.  On some occasions the songs are accompanied by other period appropriate instruments when the action steps away from the brothel and into the city streets.  I’m particularly fond of the ‘Paint It Black’ rendition that plays when Hector and his gang first have their infamous shoot out in Sweetwater, but honestly every song has just been absolutely brilliant.

All of these beautiful renditions along with the main Westworld theme are now available to stream on Spotify or purchase on iTunes.  The songs available so far are the instrumental covers of The Rolling Stones’ “Paint It Black,” The Cure’s “A Forest,” Soundgarden’s “Black Hole Sun,” Radiohead’s “No Surprises,” and the main theme by Ramin Djawadi (who also did the Game of Thrones main theme).  You can purchase each individual song for $1.29 or all of them together for $4.99.

We’re only halfway through the season so it should go without saying that this is only a partial list of the Westworld music that’s planned at this time.  We know we’ll be getting more Radiohead before the season is done, but the rest we’ll just have to wait and see.

Previous:‘Midnighter and Apollo’ Issue 2: The Light Goes Out – Lucas Gets Ready For A Perilous Journey!