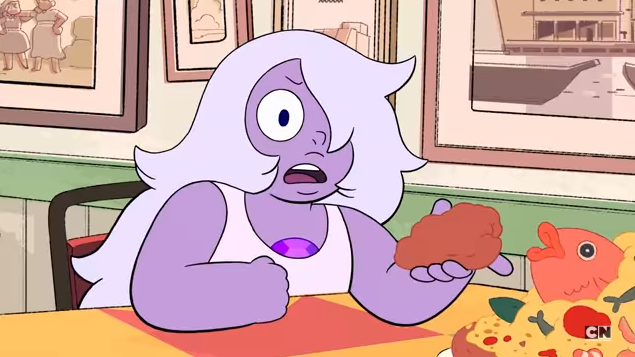 Upon returning to the Temple, Sapphire has an emotional breakdown when she realizes Ruby ran away. A concerned Steven tries to find her, but Amethyst seems dead set on distracting him, prompting both to ask “What’s Your Problem?”

Back when Steven Universe started, Amethyst and Steven being completely distracted from their responsibilities was a common occurrence. As such, Amethyst’s sudden reversion to fun-loving shenanigans to the exclusion of all else was instantly eyebrow-raising.

As she dragged Steven to Fun Land and played video games, I had plenty of theories for her actions. Was she acting out childish fantasies after discovering her mother figure was a liar? Was she angry at Ruby and Sapphire, and trying to prevent their reconciliation? When she started asking Steven pointed questions about the Pink Diamond gemstone he has, I even wondered if this was all some test to figure out if Steven really was Steven, after all.

Turns out, Amethyst was just trying to cheer her bro up. Whoops.

Amethyst’s playfulness in “What’s Your Problem” wasn’t just self-indulgence– it was a deliberate attempt to get Steven to start caring for himself for once. Amethyst wants him to look after his own feelings, and when she briefly starts slipping into a description of her own resentment and frustration, she cuts herself off to focus on the actual teenager.

The way Steven feels about this is… pretty much what we expected. After the surprise has worn off, he’s not even that upset. He’s more resigned. He already knew that his mom had done terrible things, so finding out she was terrible in different ways hasn’t affected him as much as it could have.

In turn, Steven tries to give Amethyst the chance to share. She flies off, and the ensuing sequence is filled with oodles of fun shape-shifting and puns. Finally, Amethyst faces the setting sun and declares that she just wants to focus on the future. In response, Steven gently tells her that she’s become the most mature Crystal Gem. It’s a really sweet sibling moment, with Amethyst flopping on her back and whining like a baby in mocking recognition of her new status.

It’s very true that Amethyst showed a great deal of maturity in “What’s Your Problem”. She’s the only Gem who has vocally recognized that none of them are to blame for Rose’s actions, and that Steven especially is still a child who deserves to be protected by the adults in his life, not the reverse.

But while I don’t want to undermine this importance, or just how much Amethyst has grown since the beginning of the series… She still displayed an awful lot of immaturity in this episode.

In the very first scene, Ruby’s run off, Sapphire’s sobbing, and Pearl’s right there with her. But Amethyst just lies there, offering no advice or comfort, only beckoning Steven to play video games. It’s nice that she’s trying to distract him, trying to look after his mental health! But that doesn’t allow her to ignore the mental health of her other friends.

Because while Ruby, Sapphire, and Pearl perhaps didn’t respond in the most healthy way to the fallout of “A Single Pale Rose“, who can blame them? It’s not immature to be left hurting from the lies and mistreatment of a friend, or from a fight with a significant other. Amethyst’s declaration that all of this happened in the past, that she and Steven shouldn’t be responsible, is willful ignorance. The past impacts the present, and you can’t ignore your friends’ pain just because you weren’t the cause.

Which, ultimately, seems to be the realization Amethyst and Steven wordlessly come to together. They set off as a pair, to comfort Ruby, not because it’s an obligation, but because they care for her. Nonetheless, “What’s Your Problem” still left some discussions unresolved, and I wonder how likely it is for these two to want to revisit them.