Trying To Understand Why Wonder Woman 1984 Got Pushed Back To 2020! 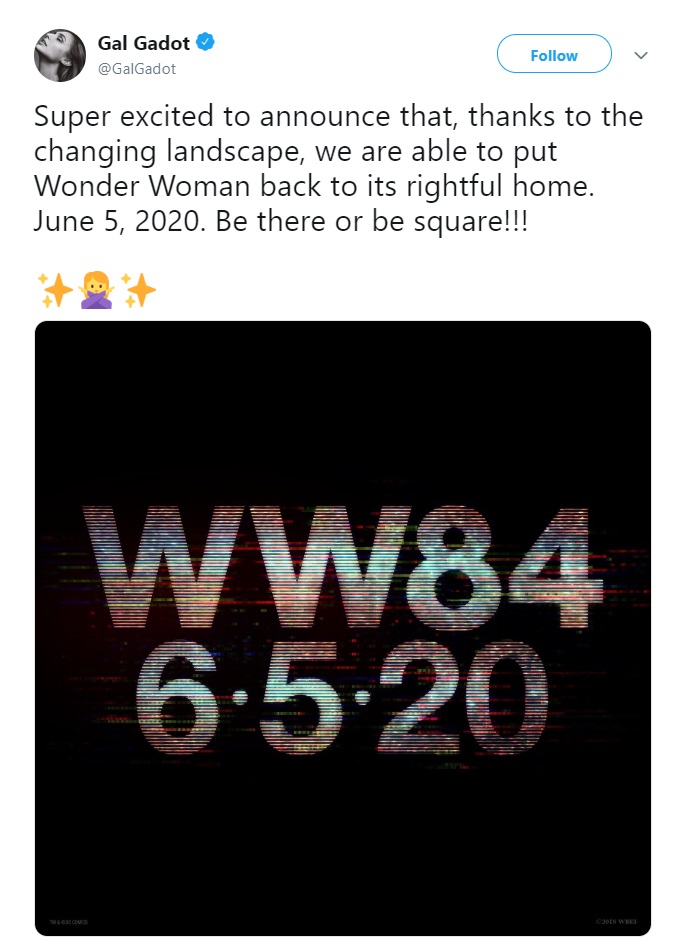 In news I’m not happy about, Warner Bros. decided to push Wonder Woman 1984 to June 5, 2020. With the first DCEU Wonder Woman film coming out in 2017, that is a long wait for fans who have been counting down to see Gal Gadot as Diana Prince come November 1, 2019.

I was looking forward to 2019 being an awesome year for women on the big screen. Not only were we getting Wonder Woman 1984, but Captain Marvel as well. Also, WW84 sticking to its 2019 release date meant DCEU fans would be treated to three films including Shazam and Joker. But alas it was not meant to be.

While I have no idea why the studio decided to push back the release of the Wonder Woman sequel all the way to June 5, 2020, Gadot is quite happy about it.

Now, there has been speculation about the current change being due to box office competition from Frozen 2 and possibly Terminator 6 (which features the return of Linda Hamilton as Sarah Connor), but I don’t buy it.

And it’s not like WW84 won’t be facing competition on its newly announced June 2, 2020, release date. As of now, the film will have to face off against Top Gun: Maverick and an untitled Disney/Pixar flick in the same month. Furthermore, what’s even worse, Red Notice is opening just a week after WW84.

For those who don’t know, Red Notice (from Universal Pictures/Legendary Entertainment) stars Gal Gadot and Dwayne Johnson. So, I don’t think anyone will appreciate getting two Gal Gadot films releasing just a week apart. If Red Notice doesn’t move, I can see it cutting into WW84‘s potential box office.

As far as my opinion goes, I think the DCEU being in a state of flux might be one of the reasons the studio decided to delay Wonder Woman 2. With Gal Gadot’s Diana being the heavy lifter, the studio wants it to be perfect and I wouldn’t be surprised if we hear about reshoots and script changes down the line. And frankly, if the rumors I have heard are true, the upcoming film can benefit from certain tweaks