“To Wong Foo, Thanks for Everything! Julie Newmar” Gets Blu-ray Release This May 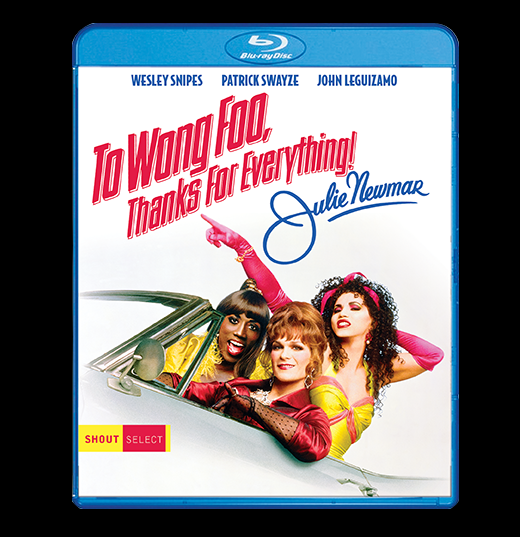 To Wong Foo, Thanks For Everything! Julie Newmar (Image: Shout! Factory)

To Wong Foo, Thanks for Everything! Julie Newmar is getting a Blu-ray release, featuring extra content, in time for Pride. You will be able to own it, from Shout! Factory, come May 28, 2019.

To Wong Foo, Thanks for Everything! Julie Newmar was released back in 1995. Directed by Beeban Kidron, the film starred Patrick Swayze, Wesley Snipes, and John Leguizamo as three drag queens on a cross country road trip to take part in a major Drag Queen pageant. Of course, their car breaks down and the queens have to spend time in a small town called Snyderville. While waiting for their car to be repaired, the three queens help bring happiness to the townsfolk.

I mean, seriously, you should all know about the plot of this film. If you haven’t watched it yet, you should. It is very enjoyable. The film was a massive success for its time and grossed more than $45 million at the box office.

Its title refers to an iconic autographed photo of Julie Newmar (known to me as Catwoman) which the queens carry with them on their journey. Newmar appears in the film as herself. It also features an appearance by RuPaul.

The movie shared some similarities with The Adventures of Priscilla, Queen of the Desert which debuted in 1994 and starred Hugo Weaving, Terence Stamp, and Guy Pearce as three drag queens.

I found To Wong Foo funnier than The Adventures of Priscilla, but that is just me.

The upcoming home release has a feature titled “Easy Rider In Dresses” which will provide “a look back at the making of the movie. The spot will include interviews of Leguizamo, who plays Chi Chi in the film, as well as the director and screenwriter Douglas Carter Beane.”

Deleted scenes are also included in the Blu-ray release.

Other Blu-ray releases of queer titles from Shout! Factory for Pride are Boom!, Jeffrey and Can’t Stop the Music.