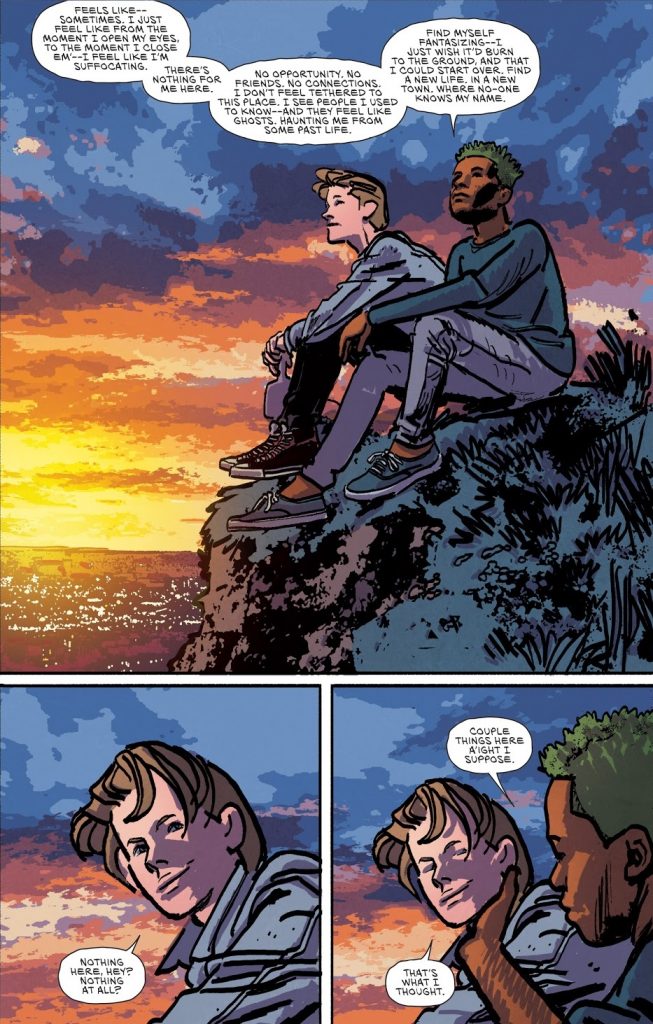 The fourth and final issue of Youth season one was released this week and I hope more people consider picking it up. From the creative team of Curt Pires and Alex Diotto, this queer-led story, featuring teens with superpowers, has a lot to say. Also, why not pair the Youth music playlist with your reading session?

For anyone interested, you can read my review of Youth issue 4 here. The series has been renewed for a second season and is also in development over at Amazon Studios. NY Times recently highlighted it in their piece about 10 queer comics to read for Pride Month.

Curated by Curt Pires, below is the Youth music playlist along with why Pires selected each track!

“There’s a tenderness and sincerity to this song that cuts to the bone. The production is raw and minimal but builds and expands when it needs to. It’s a whole story told in a couple minutes of song. The up pitched “keep a place for me” always gets me.”

“People were obsessed with this song since the Ryan Beatty hook leaked on Instagram and it’s easy to see why. This is pure soul searching pop that also functions as an ode to Kevin’s significant other, and insanity, and inescapability of infatuation.”

“Another song that functions as an isolated narrative. Faith sees Tesfaye revisiting his past self and his past mistakes and channeling the entity/dark side for a brief moment. It takes a bold artist to do this. I think there’s some similarity here between this and YOUTH. I tried to alchemize wild painful times from my past into a narrative form with YOUTH much the same way Tesfaye does in Faith. Like Abel, I’ve moved past it, but accept that it’ll always be a part of me. And I’m not running from it.”

“This song tackles the idea of California not just as a physical entity but as a mythological one. Addresses the place of California in mass consciousness, in a way that I think speaks to California’s status as an artistic Mecca. California is one of my favorite places on the planet. I’ve been in love with it since I was a kid. River and Frank fetishize California in this way. They don’t really know California, but the idea of it represents liberation to them.”

“The most beautiful thoughts are always besides the darkest.”

“This song has a spiritual feeling to me. When I need to reconnect with the light, and pull myself out of my head, I’ll play it and try to re-center.”

“I first heard this song in Mid90s which was an influence on YOUTH. But I couldn’t figure out what it was. Shazam couldn’t even find it because the album it’s from isn’t on Apple Music or anything. This is such an entrancing hypnotic song. The whole of “1000 Airplanes on the Roof” is really worth listening to.”

Note: The film Mid90s is available to watch for free through Amazon Prime Video.

“I love the juxtaposition of maximalist pop and the sort of dark lyrical content. Passion Pit’s composer and creative lead Michael Angelakos is really a master of this dichotomy. He’s an heir to Brian Wilson in a lot of ways. This song always takes me back to specific places in my life when I was listening to it.”

While I have added some links to where you can find certain songs on Amazon Music, of course, feel free to listen to the Youth music playlist on Spotify, Apple Music, YouTube, or wherever you get your music from.

As for the 4-part Youth season one comic book story, it’s free for members of Amazon Prime, Kindle Unlimited, and comiXology Unlimited. You can also purchase each issue for a couple of dollars.

Let me know if you have read Youth and what you thought of it.