Celebrating its 10th anniversary and available in time for the sequel Zombieland: Double Tap, the highly enjoyable Zombieland is coming to 4K Ultra HD on October 1, 2019, from Sony Pictures Home Entertainment.

Directed by Ruben Fleischer and starring Academy Award nominees Woody Harrelson, Jesse Eisenberg, and Abigail Breslin, along with Academy Award-winner Emma Stone, Zombieland is definitely one of the better movies about the undead out there.

Released back in 2009, the film has been remastered in 4K with High Dynamic Range. The upcoming home release also includes “an all-new exclusive Dolby Atmos audio track, along with the original theatrical 5.1 audio.”

Furthermore, fans will get to experience “exciting new special feature, showcasing the cast offering a retrospective look back at the original film, plus hours of fun and frightening archival special features.”

Nerdy college student Columbus (Jesse Eisenberg) has survived the plague that has turned mankind into flesh-devouring zombies because he’s scared of just about everything. Gun-toting, Twinkie-loving Tallahassee (Woody Harrelson) has no fears. Together, they are about to stare down their most horrifying challenge yet: each other’s company. Emma Stone and Abigail Breslin co-star in this double-hitting, head-smashing comedy.

The Special Features on 4K Ultra HD are:

The Special Features on the Blu-ray are:

Zombieland went on to gross more than a $100 million at the global box office against a reported production budget of $23.6 million. 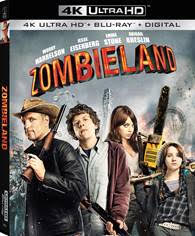 The film has a run time of approximately 88 minutes and is rated R for horror violence/gore and language.