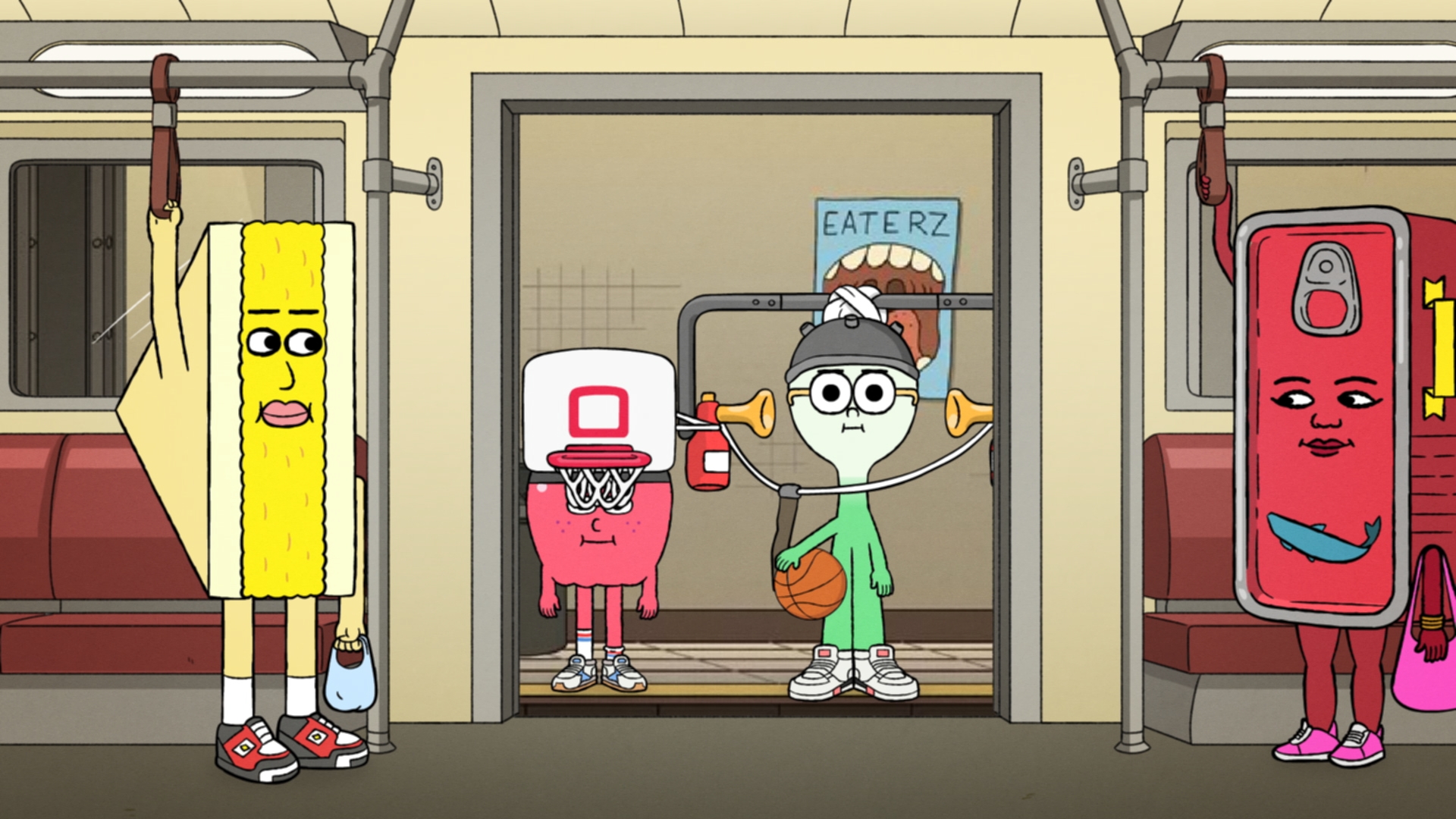 Apple and Onion are back with a double serving of entertainment with “Apple’s in Trouble” and “4 on 1.”

There is some nice continuity in this (apple) slice of life show. We open “Apple’s in Trouble” with the best food friends working at their new job at the dollar store, which they got at the end of the previous episode “Falafel’s Fun Day.” They bring the same well-intentioned bumbling to their job as they do everything in their new life, and Apple ends up yelling at Lemon Drop (a foodiverse child) for distracting him while trying to get his work done. A customer, Cheesesteak, stomps in, and Apple does so poorly trying to cheer him up that Cheesesteak tells Apple he’s going to make him into applesauce the next day. Onion and Apple follow Cheesesteak to his job at a hotel, to see him being chewed out (get it?) by his boss, Fried Shrimp. Then they see Fried Shrimp being yelled at by Birthday Cake, and realize there is a cycle of anger afoot that they must break to stop Apple from being bruised.

Perhaps with shows like Steven Universe and Adventure Time airing on Cartoon Network, it shouldn’t be so surprising to find a bite-sized lesson about abuse wrapped in colorful foodsonas. But until “Apple’s in Trouble,” Apple & Onion hasn’t yet felt profound in this way, and there is absolutely nothing wrong with that! The world needs fun, original projects that strive to entertain, with good lessons for kids about friendship and respect. What makes “Apple’s in Trouble” different is the acknowledgement that anger is a cycle – not simply “be nice to the bully, they are probably insecure about something” but “find the source of what made the bully and fix it if you can.” Of course, real life is rarely so neat that it’s a closed circle – in this case, it was Apple being mean to Lemon Drop which started the chain reaction. He not only apologizes, he takes full responsibility for what he did. Lemon Drop forgives him and the cycle of anger is broken.

As “Apple’s in Trouble” was mainly about Apple, so “4 on 1” is primarily about Onion. It turns out he is an ace basketball shot, who can make a basket from anywhere on the court, “nothing but hoop.” Impressed by his skills, Hot Dog and Burger ask him and Apple to play on their team for a four-on-four tournament. In front of a crowd, Onion freezes up, and is unable to make a single shot. The others regretfully explain they will need to replace him with Jumbo Dog if he can’t figure out how to unfreeze before the final game. Apple tries lots of tricks to prevent Onion from being distracted by onlookers, and naturally they backfire spectacularly, going so far as to land them in jail. In the end, Onion remembers breathing techniques his father taught him to help with his anxiety, and is able to make the game-winning shot. Hooray for neurodiversity and good parenting! 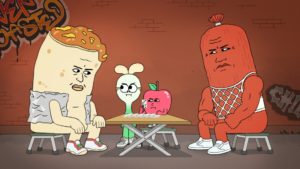 Both episodes dealt with serious issues, but were still fresh and funny. I loved Onion’s deadpan-yet-sincere “look at all the magical places we’re getting to see” as they float through the sewers. Two beefy fellas – a burrito and a sausage – are playing dominoes in the park (and the juxtaposition of the Big Intimidating Characters playing something as silly as dominoes is already fun), and the burrito is wearing a tin-foil jacket and the sausage is wearing a mesh shirt, a la sausage packaging. “Go get ‘em Sonion” and “well done Sonion.” Hot Dog’s (beautiful) hair is locks of mustard. Jumbo Dog’s “clever editing.” Beneath his glasses, Onion has anime eyes. And of course, that classic Cartoon Network bit: flushing yourself down the toilet (twice!).

After “Apple’s in Trouble” and “4 on 1,” we are now over halfway done with Apple & Onion’s limited run. There is a lot of criticism out there for how Cartoon Network handles their scheduling (I have even written some myself), but I am optimistic about their many multi-platform projects coming down the pipe. Apple & Onion might not have the emotional density of Steven Universe or the commercial viability of Teen Titans Go!, but it is still colorful and fun and worth a watch (or two or four – it is only ten episodes, after all!). If more networks gave creators like George Gendi a shot at their own projects, television would enter an age of creativity and originality we have never seen before. For now, we have Apple & Onion to munch on. 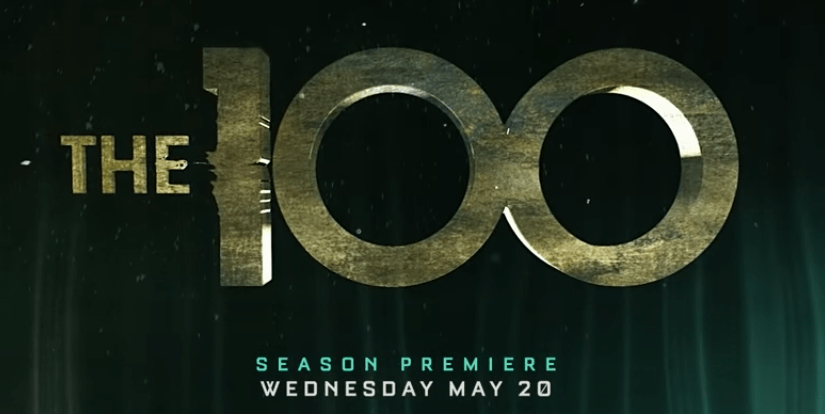