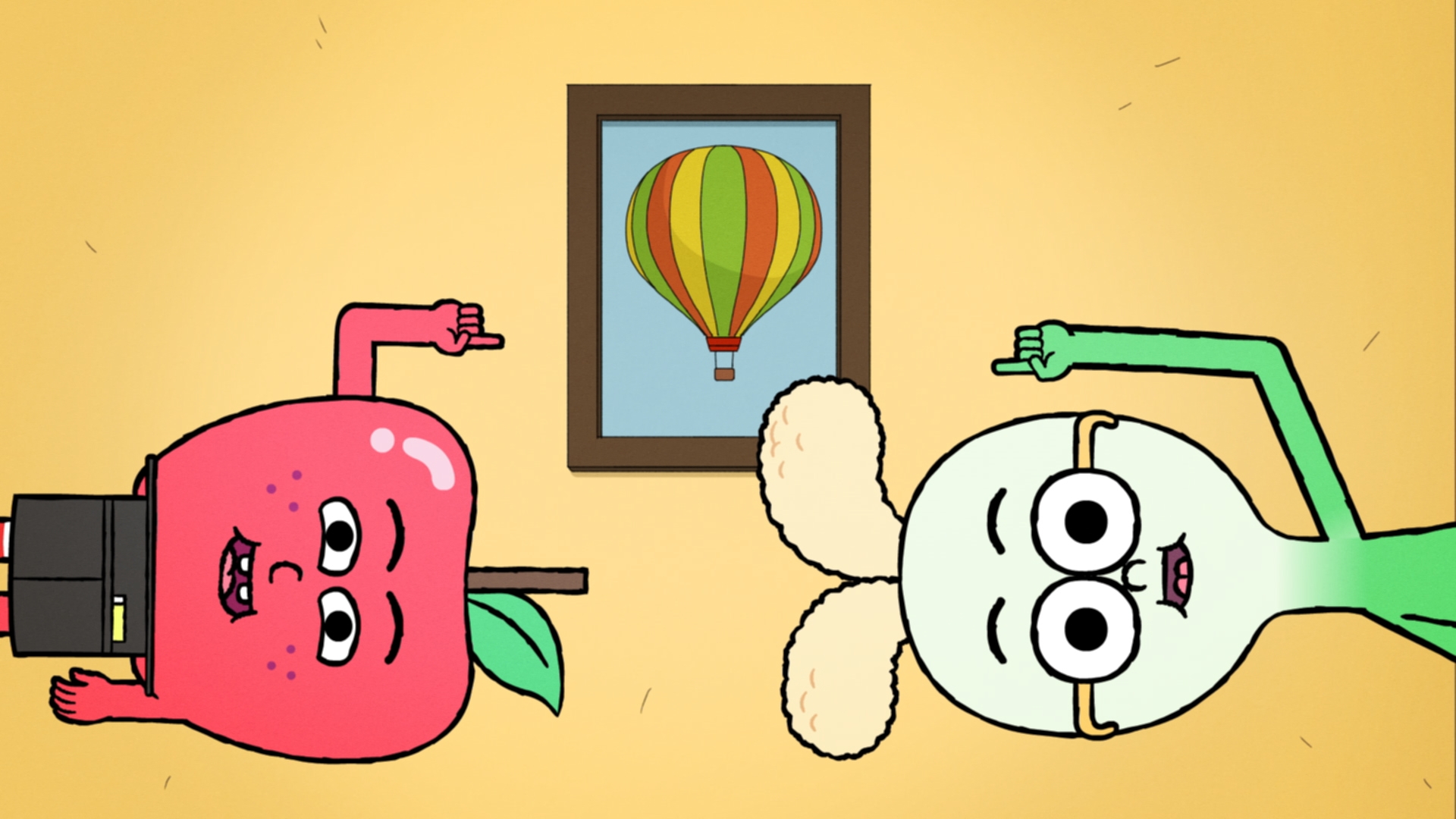 The Cartoon Network original short series Apple & Onion continues to deliver on the delicious duo’s antics in “Tips” and “Falafel’s Fun Day,” plus plenty more tasty tidbits about the foodiverse they live in.

In “Tips,” Apple and Onion decide they want to fill the day’s activity with a glamorous hot air balloon ride. Except, of course, it costs all kinds of money, which they do not have. They go to Pizza’s Diner to brainstorm, to find Pizza in desperate need of a break, since the diner is open 24 hours and it’s just him and his mother working there. Pizza offers them a job serving tables, so he can rest and they can accrue the tips they need to go on the hot air balloon ride. Coincidentally (in a cartoon kind of coincidence), Pizza has always loved hot air balloons and wanted to fly in one himself. After stumbling through other tip-acquiring strategies, Apple and Onion figure out the right methodology (“be helpful”) and gather enough tips to send them both aloft. But, of course, they do the right thing, and give the money and the hot air balloon ride spots to Pizza and his tired mom.

“Falafel’s Fun Day” introduces us properly to Falafel, Apple and Onion’s long-suffering landlord. They are great admirers of Falafel and how well he is able to fix things around the apartment he graciously lets them stay in, probably rent-free, since both episodes emphasize how little money they have, and how uninformed they are about basic employment expectations. Just like Apple and Onion, Falafel misses his family back home, which given his penchant for foreign television, his ethno-culinary identity, and his other non-white racial coding, is probably much farther away than the Apples or the Onions are. Falafel is fed up with city living and decides to leave, but Apple and Onion beg him to reconsider, promising him a fun day that will make him want to stay. At first, they pick things that they like, and the outing does not go well. When Apple and Onion realize their mistakes, they pick activities Falafel is interested in, and are much more successful convincing him how much he would miss the city. In the end, the three food friends realize they’re each others’ new family. Plus, Apple and Onion get jobs at a dollar store.

Apple & Onion is not trying to reinvent the wheel of cartoon comedy. There are two friends, of disparate personalities, who stumble from social faux pas to social faux pas, learning lessons and solving problems with the power of friendship. That could apply to so many television premises, and not just cartoons either; it hit me that Apple and Onion and their entire schtick is not all that dissimilar to Ilana and Abby, the BFFs from Broad City (only the food bros are far more family-appropriate, naturally). Some might find the aggressive naivety of Apple and Onion cloying, but they are merely vessels for gentle lessons and good-good goofs.

Worldbuilding is usually what grips me about a given piece of media, and nothing has felt stranger than the questions running through my head about the world throughout Apple & Onion. In “Tips,” I was delightedly horrified by Pizza’s features oozing down his slice-body as he was falling asleep on his feet. At one point, a cup of coffee is spilled — except that cup is a person and the coffee is their… blood? Guts? Soul? Either way, the regular coffee that is drank by the foodies is also used to fill this coffee-person. Terrifying and hilarious, indeed.

Parenthood is also questionable in the Apple & Onion universe. The title characters seem to come from more “traditional” families, in that each of their parents are the same food as they are. But Pizza is a slice, who was quite literally birthed of his mother, a full pie (minus the slice Pizza was born from). Falafel is another head-scratcher: he is the full meal of a falafel, as it were (falafel balls, veggies, and a pita), but his parents were falafel balls and a veggie, respectively. So where does the pita come from? How can he lose his insides and still be hunky dory? How can an ice cream-cone-who-is-a-person get their face smacked off, but continue to drink their beverage? Can food people really get bugs in this universe, or is that just Apple’s overactive imagination?

I don’t need answers to these questions. It’s a part of the fun of the universe to watch in terror/glee as birds tear off pieces of Falafel and feed them to their babies.

Despite this high potential for body (fridge?) horror, Apple & Onion continues to be lighthearted and fun more than anything. The songs, the silly dances, the split-screen conversations — “Tips” and “Falafel’s Fun Day” deliver in spades.