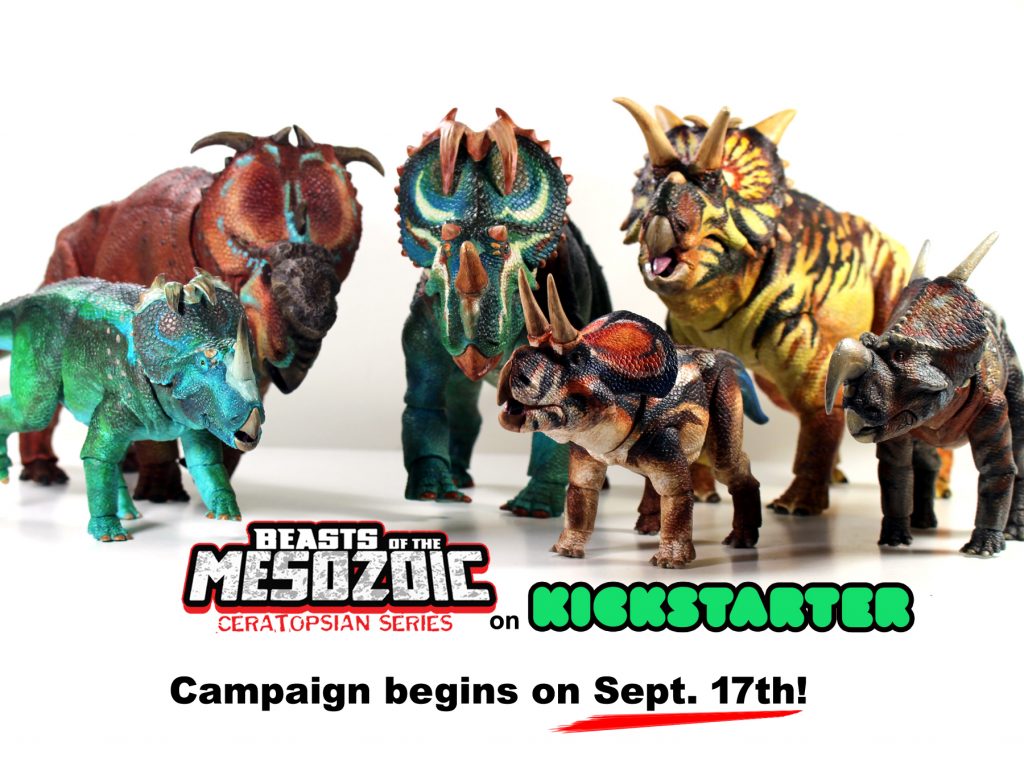 Creative Beast Studio has launched an exciting Kickstarter campaign to support the creation of the second series of its “Beasts of the Mesozoic” brand dinosaur action figures. It’s all about giving collectors accurate representations of the Creatopsians family of dinosaurs.

The new line has a “focus on accurate representations of the beloved Ceratopsians family of dinosaurs, best known by the legendary Triceratops.”

Presented in 1/18th scale, each figure will include around 20 points of articulation and with various sizes available depending on species.

You can check out the campaign right now.

According to the Press Release:

Take note, those pledging for the Kickstarter exclusive Monoclonius figure are in for a special treat. The package art is an 80s homage created by none other than legendary fine artist Ezra Tucker, one of the original package artists for Tyco’s Dino-Riders toy line! Ezra’s piece will also be available as an 11×17 signed print limited to only 100 copies.

Furthermore, if the initial Kickstarter goal is met, David has an additional 21 species ready to go as unlockable stretch goals!

This will be the first time many of these dinosaur species are available to the public in action figure form.

The Ceratopsian line is the follow-up to Creative Beast Studio’s “Beasts of the Mesozoic” Raptor Series, launched in 2016 via a Kickstarter campaign that well surpassed its goal and currently includes 35 products.

The success of 1/6th scale raptors opened the door to the Ceratopsian Series, another fan-favorite group of popular dinosaurs.

Originally created to meet fans’ rabid demand for accurate depictions of dinosaurs, Creative Beast Studio’s “Beasts of the Mesozoic” line of dinosaur action figures features the only scientifically-accurate representations of its kind on the market. The line has evolved into the go-to destination for authentic-looking dinosaurs using the most up-to-date scientific knowledge publicly available.

“I’ve been obsessed with dinosaurs since I was a kid, and I suspected that I’m far from the only adult with a dino-devotion. However, as I grew older and wanted to express that passion, I couldn’t find any collectible dinosaur action figures that met my standards of realism and quality,” said David. “In creating the ‘Beasts of the Mesozoic’ brand first with the Raptors and now the new Ceratopsian Series, I’m thrilled to be providing fans with more dinosaurs that scratch (or claw) at that itch. The Dinosaur Revolution continues!”

You can go ahead and know more about Creative Beast Studio by visiting the official website.

Previous:How To Write Bisexual Characters Who Read Like Actual Bisexual People
Next: Battlestar Galactica: The Case For And Against Reboots