Bend the Knee: A New Ommegang Game of Thrones Beer 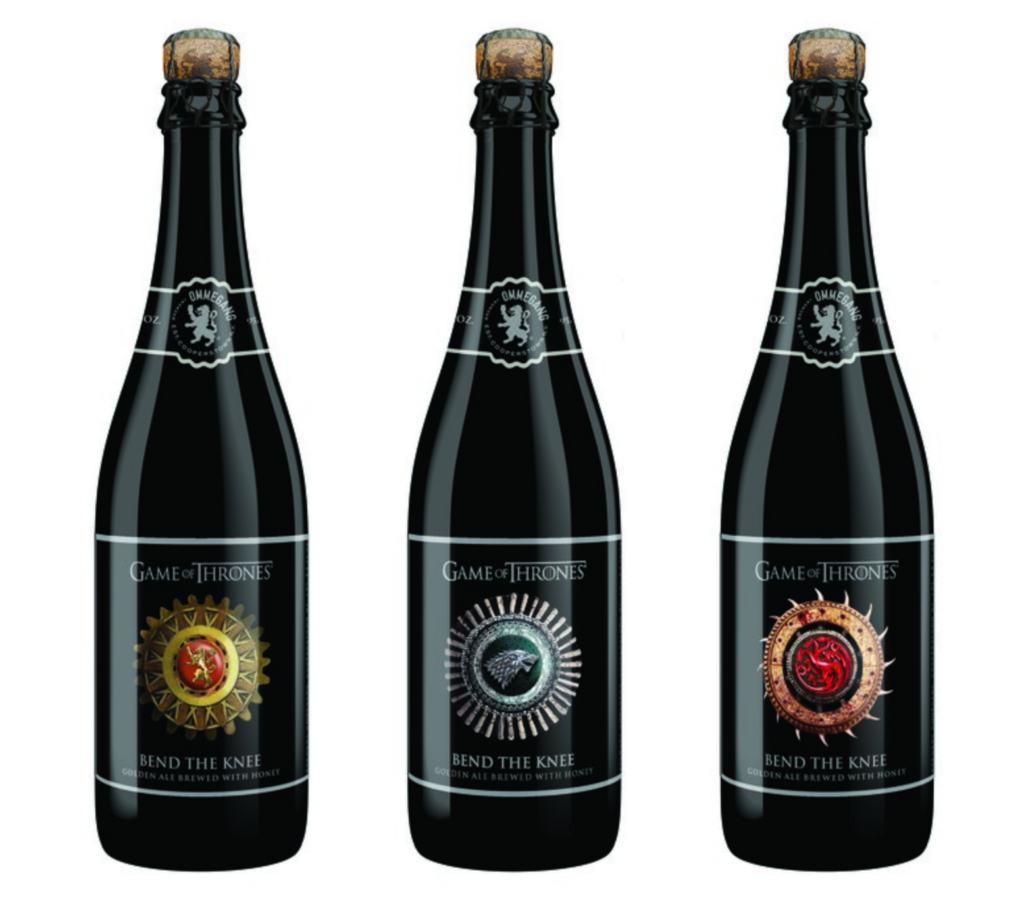 Earlier today, GQ released an exclusive report about Bend the Knee, the next in line for Ommegang’s Game of Thrones-themed beers.

While I’ve had mixed opinions about the brews themselves at times, I’ve always loved not just hearing about but trying Ommegang’s Game of Thrones beers. In fact, I have a collection that comprises all of the past bottles, and you bet I’m going to make sure I procure a bottle of Bend the Knee to add to that collection!

And yes, that’s despite the fact that the description for Bend the Knee is that it’s “a golden ale, brewed with wildflower honey”, which doesn’t much appeal to this Pale Ale- and IPA-loving gal…but Brewery Ommegang president Doug Campbell did tell GQ that “The subtle noble and floral hop contribution adds to its delicateness, and the beer finishes smooth and dry.” I suppose I’ll withhold judgment until I try it.

As with Ommegang’s GoT beer “Fire and Blood”, which came in three different bottles (each featuring one of Daenerys Targaryen’s dragons), Bend the Knee will also come in bottles with three labels – fans will be able to choose the Lannister, Stark, or Targaryen sigils! (Or, if you’re like me, go out searching and catch ’em all.)

Sadly, while I was glad a friend sent me the link to this GQ exclusive, I have to admit that it was a low blow on GQ’s part to say, “The beer inside each bottle will be identical, though, and no matter which you choose, George R. R. Martin will still not have delivered a new book.”

I mean hey, we get it, Martin takes a long time to write these books…but have we forgotten Neil Gaiman’s line, “George R.R. Martin is NOT your bitch”? Yeah, you know what, as a book reader it sucks that it will be six years this summer since we got a Song of Ice and Fire installment. And as a book reader it sucks to watch Benioff and Weiss bastardize this series that I know and love so well. And as a book reader maybe I’ve simply gotten so used to the wait that I can sit back and, if not ENJOY it, at least be…let’s say “chill”, with it. I certainly don’t expect everyone to feel the same, but as a writer, I ask you to understand that the creative process doesn’t happen overnight, and some things take longer to stew than others. So try to respect that, and in the meantime, enjoy some of Ommegang’s Bend the Knee beer.

TOPICS A Song of Ice and Fire. ASOIAFgame of thronesGeorge R.R. Martin

Previous:“From Dusk Till Dawn: The Series” Season 3 – Blu-ray Set Review
Next: America Chavez Solo Comic Isn’t Even Out and Is Already Winning