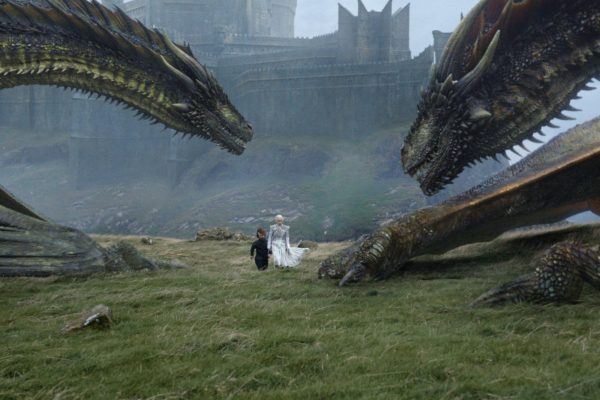 ‘Beyond The Wall’ was basically all the things I love about Game of Thrones, and almost none of the things I hate… with one glaring exception.

Before we get into my major grievance with the episode, let’s talk about all the amazing things that I loved (and minor issues). ‘Beyond the Wall’ focuses on Daenerys and the North, which are the two plot lines that keep me hooked on the show. In fact, we never actually see the southern six kingdoms in the entire episode. The closest we get are the Dragonstone scenes between Daenerys and Tyrion, and then later when Daenerys departs to rescue our dream team from the Night King. We’ve got to face the Cersei drama eventually, but not this week – she can just stew in King’s Landing, freaking out about Daenerys, for a little while longer. 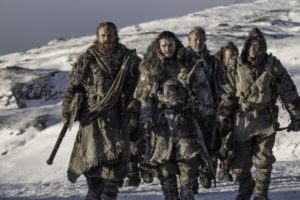 The beginning of the episode was a tad clunky with all of the small interactions between our plucky band of heroes. There was comedy. There was tension. There were sentimental moments.  And the entire thing felt like it was on fast forward, but I suppose that’s to be expected.  Without the source material to base the story on, Benioff and Weiss are basically running off of cliff notes.  And they probably want to move onto other projects, too. This has taken seven years out of their careers and propelled them into a much higher level of fame than they had before, but I can see why they’d want to wrap it up and move on.  That said, if this were the first six seasons of the show all these interactions would have probably been scattered through several episodes, cut between various other story lines across Westeros.

The best lines from the entire debacle beyond the wall belong to the Hound.  His rock throwing scene in particular was golden, though I can’t exactly repeat those lines word for word on this website.  I never thought I’d love the Hound so much.  I’d never thought a character who used such foul language and had such a brutal exterior would end up being one of my favorites, but here we are.  I think when he first started showing care for Sansa so many seasons ago was when he started to grow on me, but I enjoy him even more now.

Gendry’s part seemed truncated as well.  He joined wanting to fight and eager to use his hammer, but when it came time to fight, they took his hammer and told him to leave. Sure, it makes sense – he’s apparently their fastest runner, so sending him back was strategic. But he kind of got set up to do one thing, then veered in a completely different direction. And he had to get rid of his damn hammer! Poor dude. But at least he didn’t have to sit in the middle of a frozen lake surrounded by cranky corpses for days. So hey, silver lining?

While I did generally enjoy everything that happened beyond the wall, I was sort of surprised at how quickly Daenerys showed up. Somehow Gendry ran to Eastwatch, a raven flew to Dragonstone, and Danaerys flew to their location within the span of a couple of days (if that). We know at least a day passed as we are shown night and morning as they are stranded surrounded on the frozen lake. Someone in a Reddit thread (I apologize for not noting the link) did the math and calculated that it could be done in as little at 36 hours. But in order for that to happen, both Gendry and the raven would have to be traveling at a constant top speed and the dragons would have to fly at an uncomfortably fast pace.

Yes, this annoyed me. But despite that, this still wasn’t an episode-ruining moment for me. It was jarring, but I can excuse it just like I can move past the suddenly accelerated plot. I wish they would slow down just a tad, though. Let us feel the agonizing wait. Let our characters have unaffected conversations. Let the plot flow at the pace that comes naturally. 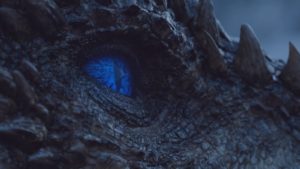 The loss of Viserion was an incredibly emotional blow. I was close to tears, just like I was for every single direwolf death. These animals have become incredibly important to not only the characters, but to us as viewers. With fire being one of the wights’ and White Walkers’ weaknesses, though, I do wonder what he’ll breathe now that he’s resurrected? Will he still breathe fire? Ice? Will all it takes to bring him down be one blast of fire from one of his brothers? Inquiring minds want to know! And my heart breaks thinking of Daenerys having to take down her own child in such a way. This whole situation hurts. If the writer’s aim was to emotionally shatter us, then well done. You got what you wanted. I’m in pain.

So there we have the plot beyond the wall. Despite the pacing problems, it’s still an entertaining story.  But do you know what isn’t entertaining? The Sansa and Arya drama subplot. Lord, this needs to end, and hopefully it’ll end with a Moon Door style scene for Littlefinger. The fact that Arya didn’t kill Sansa despite her essentially threatening to do so gives me hope that they can be allies after all. It sort of reminds me of a very real world political situation right now where two factions that are generally on the same side are hashing out their differences in a very unhealthy way. Yes, there are differences and those need to be confronted and hashed out. And yes, these differences are important and there are some trust issues. But goodness, can we talk about it instead of threatening to destroy each other? And no, veiled threats does not count as ‘talking’. The real enemy is approaching and we need to come to some sort of understanding.

‘Beyond the Wall,’ despite its’ problems, was a good penultimate episode for the season. It set up the finale and has me pumped for what the final season might bring. Rest in Peace Viserion, Benjen, and Thoros. This was a rough deathcount week and you’ll be missed. Who else will we lose before the season is over? Fingers crossed that it’s Littlefinger. Dude has got to go.

One thought on “Game of Thrones 7×06 Review: Beyond The Wall”