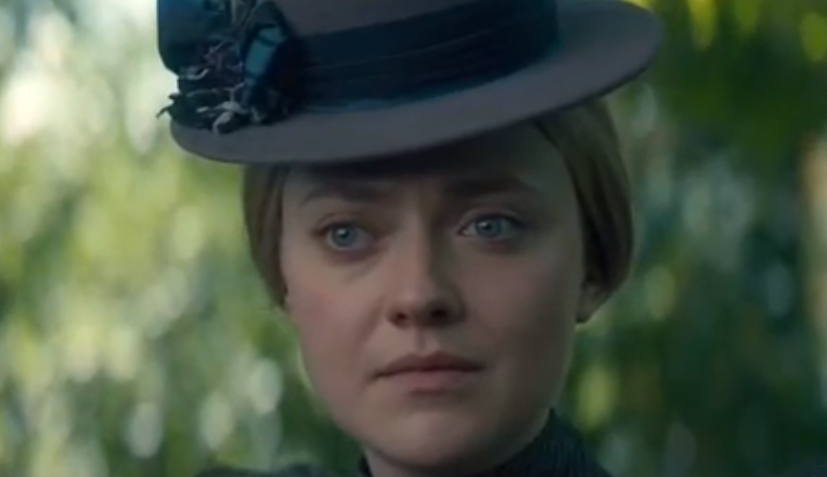 Four episodes in, The Alienist has offered viewers some important information about each lead, and now we can all wait and see how (and if) they grow as the series progresses. In ‘These Bloody Thoughts’, the killer wasn’t shy about letting Kriezler’s team know he was steps ahead of the good guys.

I was provided a screener of ‘These Bloody Thoughts’ for review. The opinions are my own.

I have to start by mentioning an awesome scene in ‘These Bloody Thoughts’: the conversation between Sarah Howard and Dr. Lazlo Kreizler. Sarah got to see him while he was people-watching in a local park. Kriezler observing others felt very relatable to me. If another episode shows him listening to what other people are talking about while he’s eating food at a restaurant instead of talking to the group of friends he’s out with, Kriezler and I are basically the same person. It’s a psychologist thing. Or at least, I like to justify it as such.

The conversation between the two showed how Kriezler’s mind worked. He drew Sarah’s attention to a woman who drowned her two children in the bath. However, she was protected by her wealthy family, preventing her from being prosecuted. But the act did take a toll on her and now the woman visited the park pushing an empty baby carriage and interacting with an imaginary infant.

While Sarah told Kriezler she couldn’t empathize with such a person, the doctor pointed out how she could still relate due to being a woman and the pressures society put on them. Kriezler talked about society wanting women to get married, to have children, and always keep smiling. While The Alienist takes place in 1896, such themes help make it relevant to present day. ‘These Bloody Thoughts’ also had a scene showing women marching for the right to vote. Even now, there’s a lot of progress to be made when it comes to equal rights.

Coming back to talking about the woman in the park, according to Kriezler, everyone has the “raw materials” to become a killer and can combust with the right external spark. Kriezler’s opinion stated that society can be blamed for making the woman in the park act the way she did. This linked to what Kriezler said about Sarah experiencing her father’s suicide and how that played a part in forming her personality. The entire conversation in the park was delightfully weird, heightened by amazingly restrained performances by the two leads.

‘These Bloody Thoughts’ showed Team Alienist (that’s my official name for the group) trying to gather as many clues as possible. Every member played to their own strengths. Kriezler took the psychological route, trying to find out the why behind the killer’s actions. He even went to see an old patient of his, a woman who was now a professional dominatrix. The interaction helped Kriezler think about the murders having a possible pain-and-pleasure connection. He even tried to gain insight from one of his younger patients, about how a child’s anger and frustration might be targeted toward their own mother.

While on his mission, we also got to see Kreizler’s own issues. He’s obviously mad about not being able to unmask the killer. There’s also some weird tension present between him, Sarah, Mary, and John. He’s also not happy with the corruption in the police department. Someone needs to give him a hug.

With Kriezler busy with the why, the Isaacson brothers took on the how of the situation. They were able to discover a piton left behind at one of the crime scenes which led them to deduce that the killer was a good climber. This find will definitely come into play in an upcoming episode. So, let’s wait and see.

John Moore worked on his ‘silver smile’ clue and found that the killer might have syphilis. Turns out the murderer’s teeth turned silver due to mercury salts, a then-common treatment for the disease. I liked John’s attachment to the young boys being murdered. He’s coming across as someone who’ll play the role of being the heart of the team, and I’m okay with it. He even took Mary out to see some moving pictures when he sensed her frustration toward Kriezler.

All of the clues helped Team Alienist conclude the killer was inflicting pain in a manner which also helped him alleviate the pain he might have experienced in the past. And while the findings made for an enjoyable episode, the team being a couple of steps behind the killer was glaringly obvious. The murderer with the silver smile knows about Team Alienist and even had every member come to a restaurant under false pretense. He knew how to contact each them and that understandably scared the team.

The killer isn’t shy about letting them know what he thinks, sending a letter to one of his victims’ mothers, talking about what he did to the boy’s body. Turns out, he likes eating the flesh of his victims. He’s also attacking immigrants, another thing that makes this show feel relatable considering what’s happening in the real world.

What did you think of The Alienist? Did you enjoy ‘These Bloody Thoughts’? Let us know.