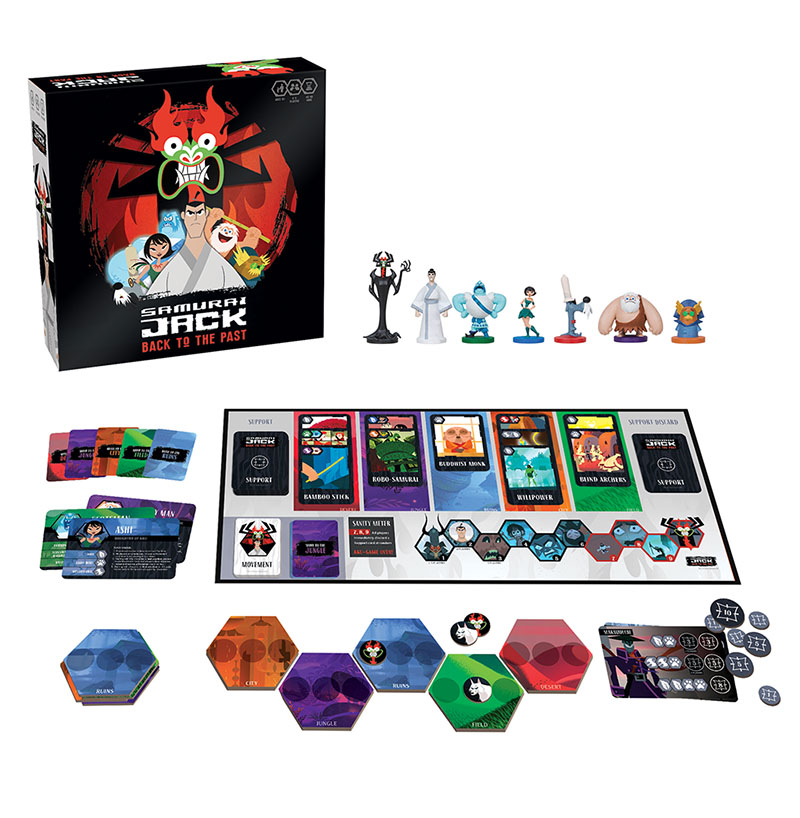 If you are someone interested in gifting Cartoon Network and Adult Swim swag, there are a number of exciting things for you to choose from. The offerings from Cartoon Network Enterprises include items from Playmates Toys, LEGO, Mattel, and more!

Let’s begin with Playmates Toys (one of our favorites) and the items for the highly popular Ben 10 series on Cartoon Network. Ben 10 fans can go for the:

This item allows you to create your own custom 3-inch mini alien hybrids using the Omnitrix-inspired chamber. The set includes 4 figures including Heatblast, Four Arms, Wildvine, and Grey Matter. The back of the chamber serves as a storage unit. This product will cost you MSRP $29.99. 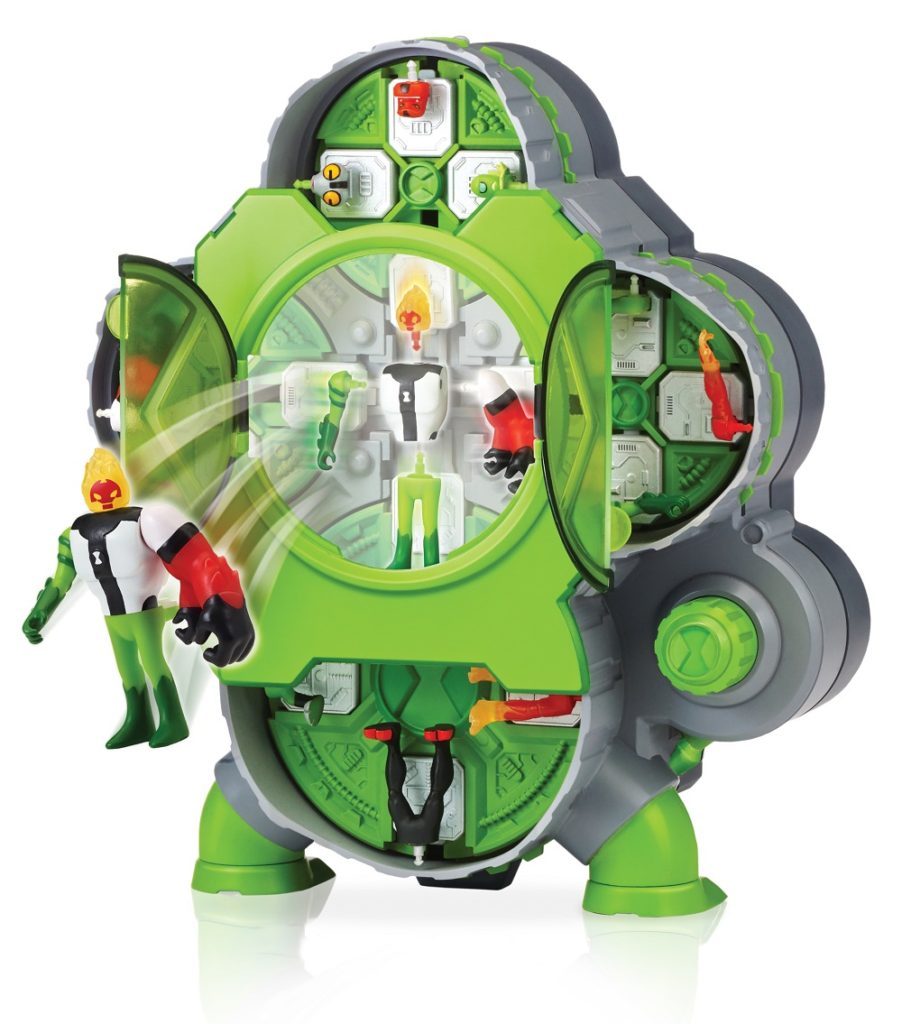 You can collect more figures by buying the Alien Figure 2-Packs (sold separately for $6.99 each).

I did an entire review of it!

With this, “kids can transform Ben’s Omni-enhanced aliens in a whole new way and
launch them into battle!”

You can use the Omnitrix launcher to load the figure disc and then launch it. The disc transforms into a figure in mid-air, ready for battle. I did try out a few of these at my little cousin’s place. It is going to take you a bit of practice to get the figures to land on their feet.

The Omni-Launch Omnitrix is fully adjustable to fit a range of wrist sizes. Each pack (costing MSRP $19.99) comes with 1 unique Omnitrix Launcher, 3 Omni-Enhanced Battle Figures and a tabletop target. 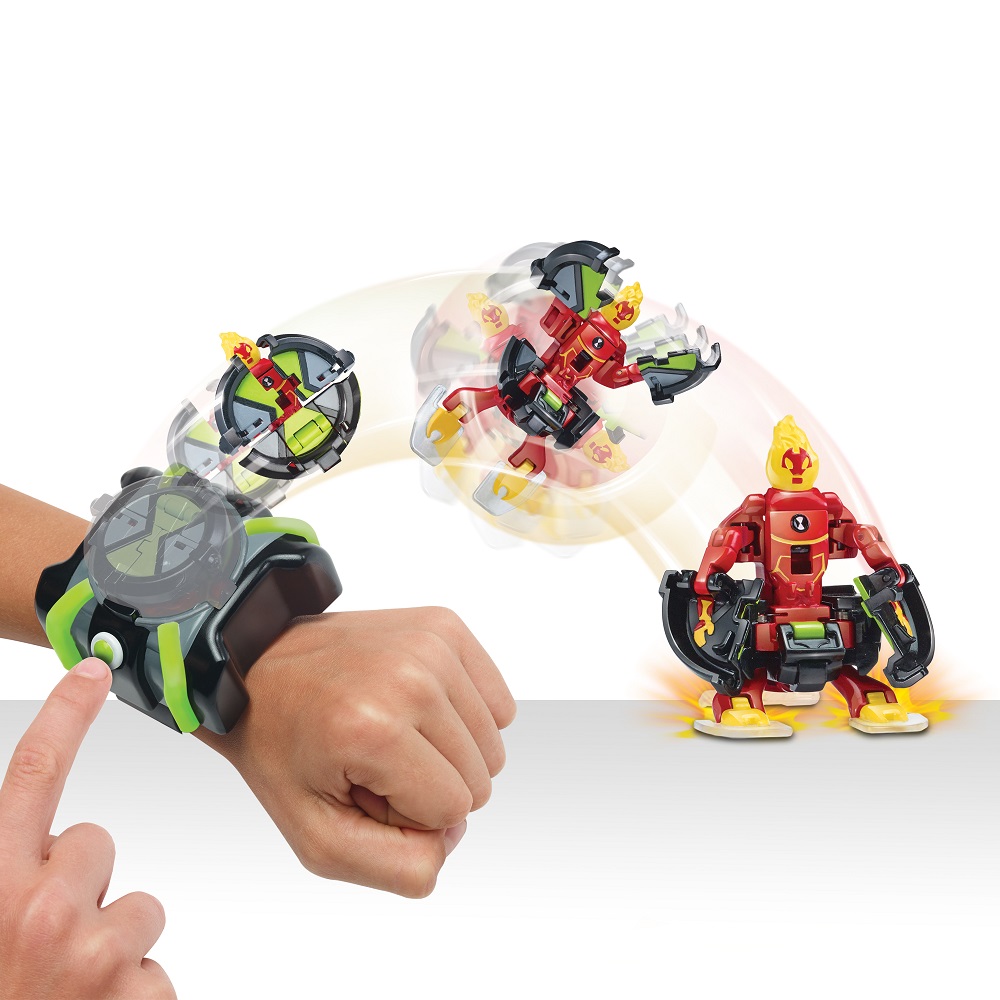 Inspired by the Cartoon Network animated series The Powerpuff Girls, Mojo Jojo is trying to steal Townsville’s diamonds in this set! The set, containing 228 pieces, features an ice cream stand with a counter and ice cream launcher, plus a jewelry store with an opening door, a rotating camera, and a wall to shoot off with the getaway car’s stud shooter.

The getaway car features an aimable stud shooter, space for the robot or stolen jewels and a handle on the back for one of The Powerpuff Girls to hang on as they chase Mojo Jojo. You can push the button to launch ice cream scoops and toppings at Mojo Jojo and his robot! 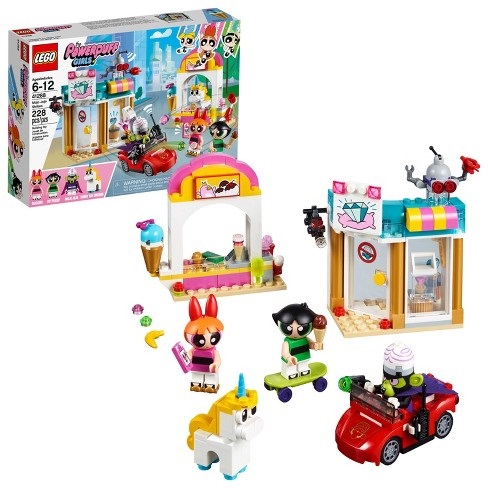 In this set, you can help The Powerpuff Girls defend the Townsville playground from Princess Morbucks. It contains 144 pieces, features a fully posable, flexible mech suit with removable power gloves, 2 stud shooters, and space for a mini figure. Costing you $19.99, the set also includes a slide with ladder, spinning merry-go-round with space for 4 mini figures, plus a lunch bench with catapult and lockers with 2 opening doors. 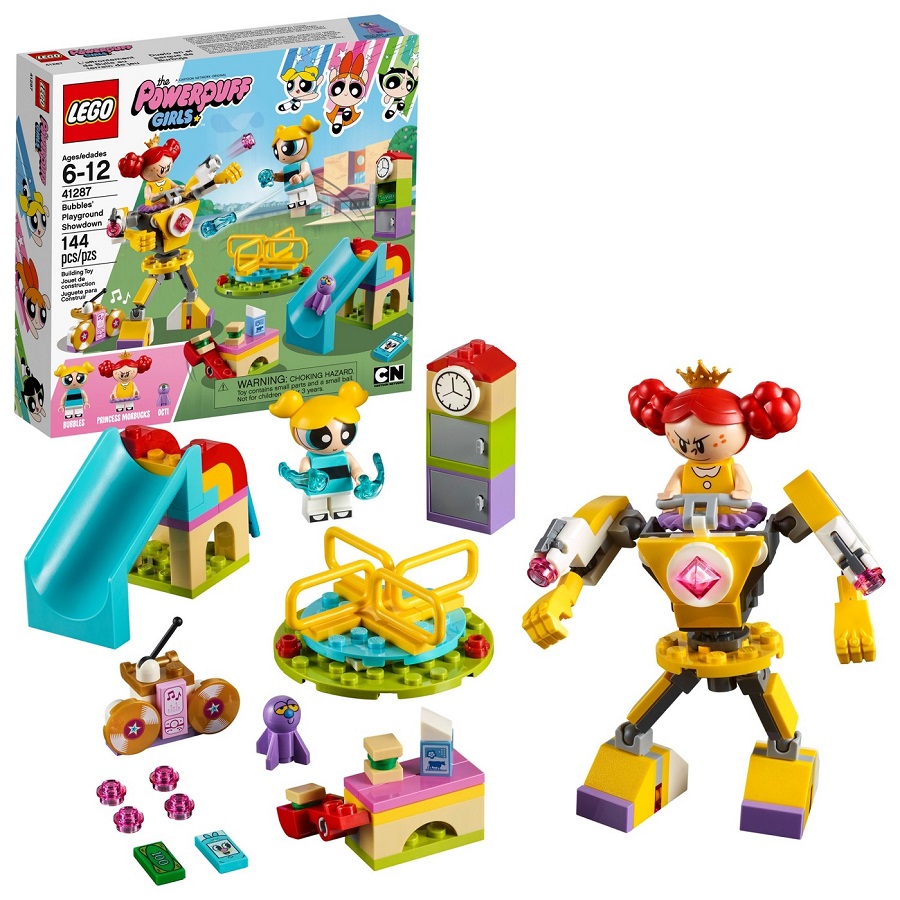 You can load a sandwich or milk carton element into the catapult and push down the front to launch it at Princess Morbucks. This set includes 2 minifigures: Bubbles and Princess Morbucks, plus an Octi figure. The accessory elements include 2 cell phones, money bill, Bubbles’ aura power shooters, Princess Morbucks’ power gloves, 2 sandwiches, and a milk carton, plus a buildable boombox.

Mattel also has some The Powerful Girls gift swag!

We all know Barbie loves to put her own twist on the latest fashion trends. This line incorporates recognizable icons The Powerpuff Girls into fun prints! These should hit stores by December 2018 if they haven’t already. 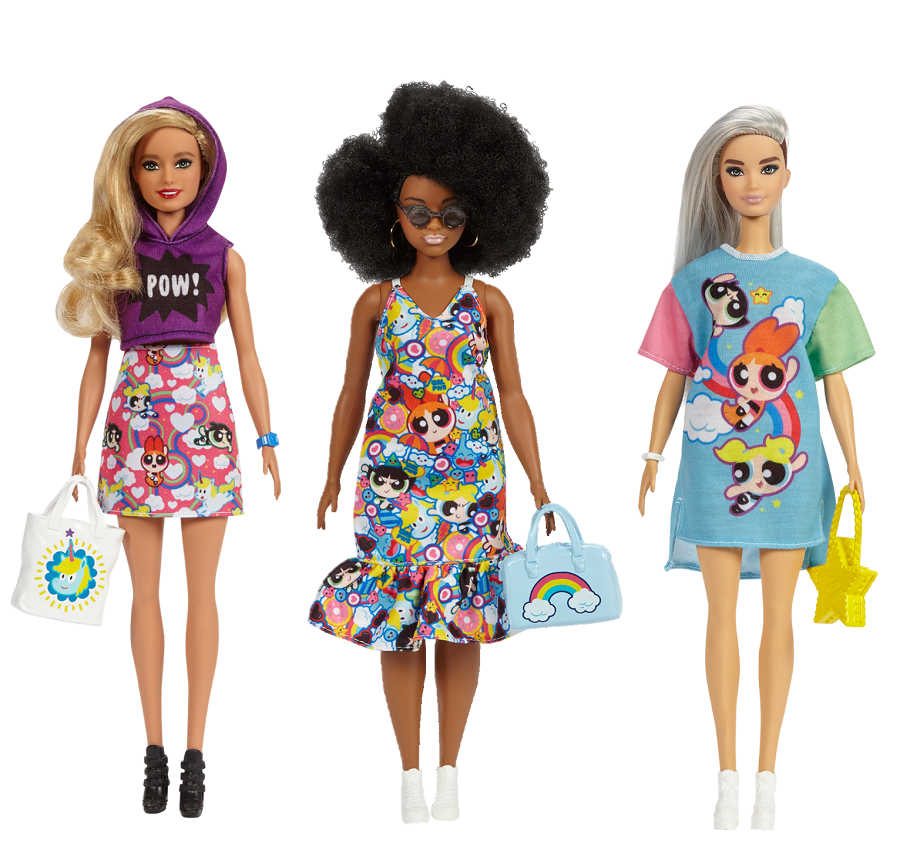 Each fashion top will be available for $2.99. For $4.99 you get a complete outfit set which includes one dress or a top and bottom and accessories.

For fans of games, there is:

This tabletop game is based on the hugely popular “Pickle Rick” episode of Adult Swim’s Rick and Morty. In this game, one player acts as Pickle Rick as he tries to escape a heavily armed compound, while the other player takes on the roles of both the Russians and Jaguar as they try to stop him.

The Pickle Rick player uses weapons cards to dole out damage and Air Vents to get out of jams as they try to get to the rooftop. The Pickle Rick and Jaguar miniatures are moved across a dynamic board made up of tiles that are constantly being added, rotated, and flipped. 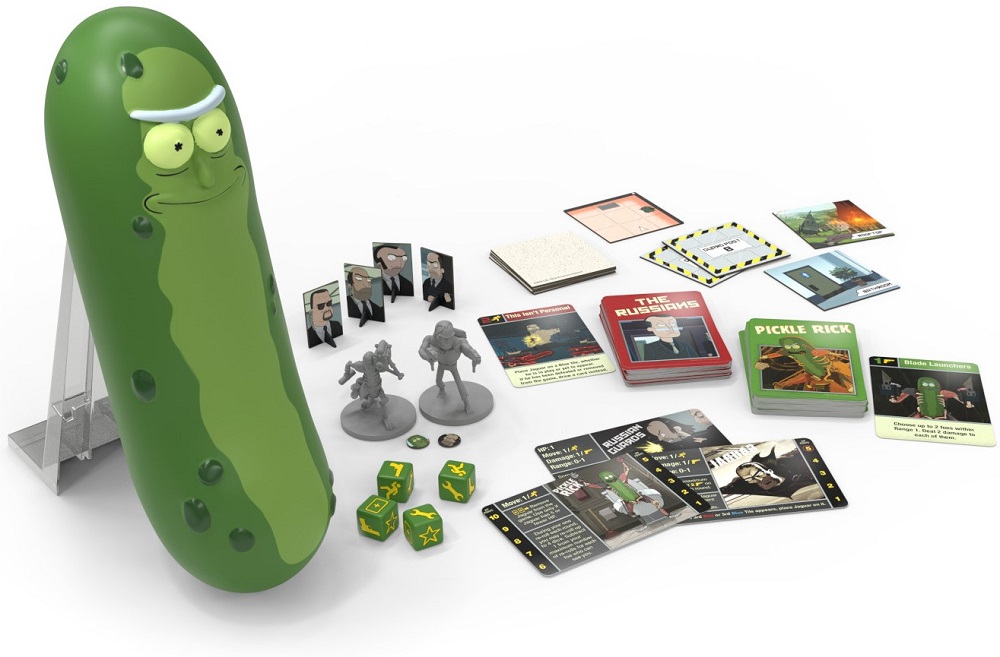 It includes Pickle Rick and Jaguar miniatures and a custom, collectible Pickle Rick game case that measures approximately 12.75 inches tall and holds all of the game’s components. You can buy it for MSRP $45.

As a fan of Samurai Jack, I am very excited about this board game. With this new board game, fans can accompany Samurai Jack on his quest to vanquish the Shape-shifting Master of Darkness, Aku. As beloved companions from Jack’s adventures, players strive to gain the most Honor by helping him gather Allies, Weapons, and Traits.

Even if you aren’t into playing this board game (costing MSRP $34.95), it includes collectible Samurai Jack mini figures!

You should also consider Steven Universe: Save The Light. 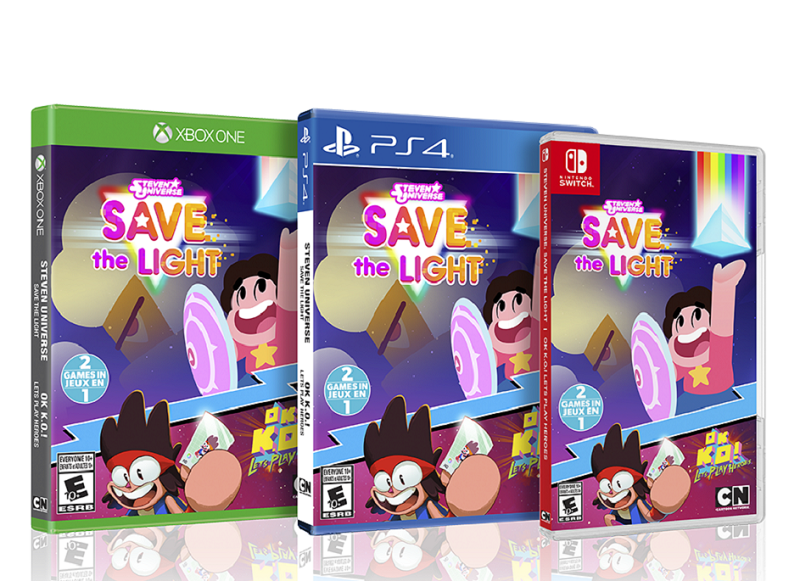 Ken Plume sits down with the creators of The Venture Bros., Jackson Publick, and Doc Hammer, to have a conversation about the creation of every single episode through season 6 and much more. “From the earliest sketches of Hank and Dean scribbled in a notebook to pitching the series to Cartoon Network’s Adult Swim, learning the ins and outs of animation, character designs for each season, storyboards, painted backgrounds, and behind-the-scenes recollections of how the show came together–it’s all here.” 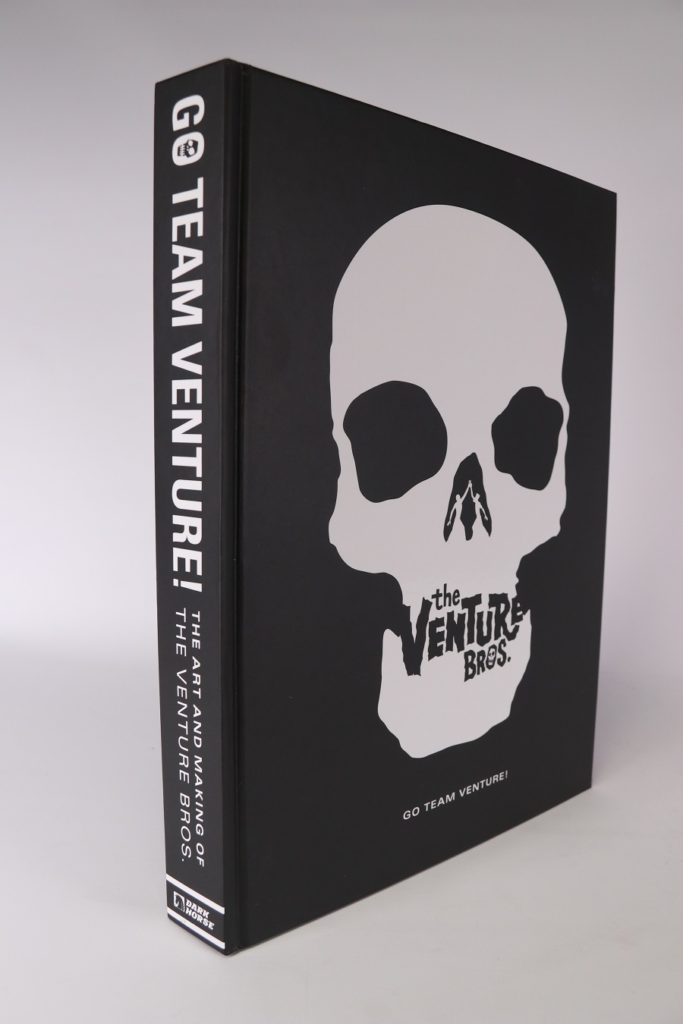 With a $39.99 price tag, this item includes a foreword by Patton Oswalt and features never-before-seen artwork from the hit Cartoon Network series!

Sub Pop and Adult Swim are releasing a 24-track soundtrack from Rick and Morty featuring music from the show’s composer Ryan Elder, and songs from Chaos Chaos, Blonde Redhead, Mazzy Star, and Belly, plus two brand new tunes from Chad VanGaalen and Clipping inspired by the show.

For the standard CD: A double LP pressed on colored vinyl featuring two single- pocket LP jackets housed together in a custom die-cut slipcase. A full digital release of all of the material on the CD and double LP. 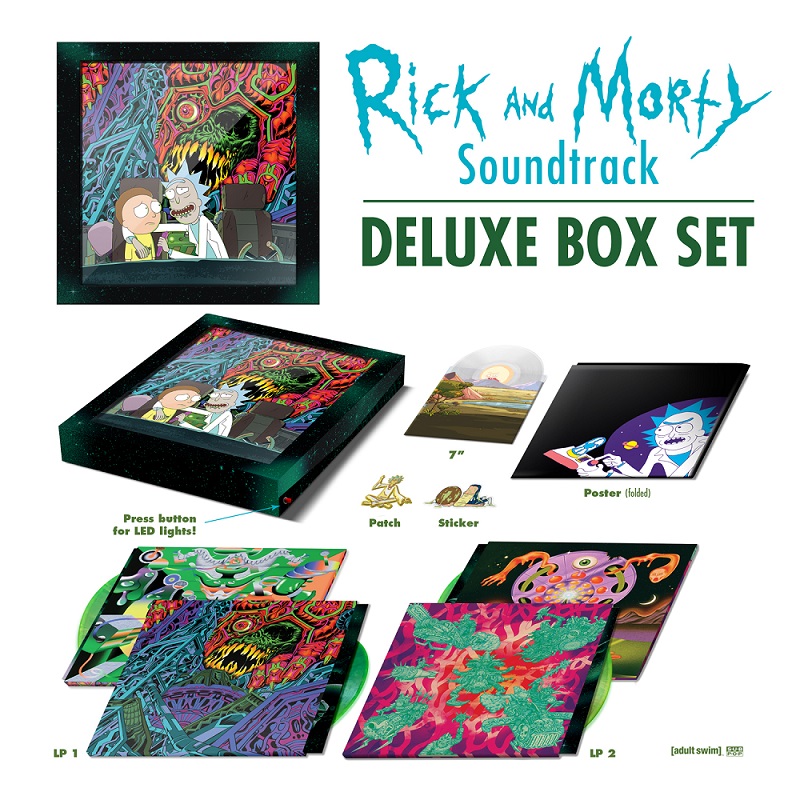 There’s also the deluxe double LP that will include the standard LP pressed on an exclusive colored vinyl housed in a box with an etched plexiglass window with LED lights which make the etching glow. The box also contains a custom poster, a patch, a sticker, and a bonus 7” single (featuring an extended mix of the screaming sun from the 2nd season finale). You can also get a traditional cassette tape.

These headphones include the ability to answer and end calls via the built-in
microphone. The adjustable headband and padded cushions provided a comfortable custom fit. It costs MSRP $24.99. 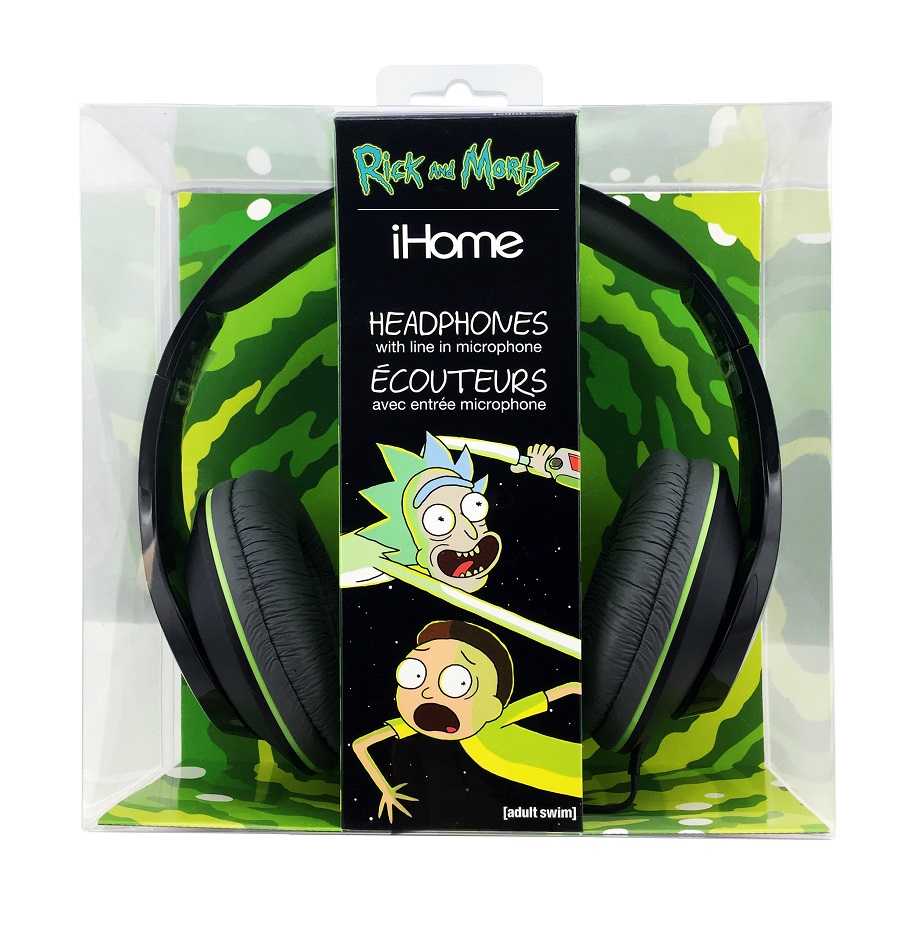 Then there are the Stocking Stuffers and Collectibles!

Good confronts evil in Wave 3 of Cartoon Network Titans. Iconic supervillains Aku and Mojo Jojo face off against the noble warrior-prince Samurai Jack, smooth-talking black belt Johnny Bravo, and Townsville’s favorite trio of superhuman crime-fighters – Bubbles, Blossom, and Buttercup – the Powerpuff Girls! Also, hailing from the Land of Ooo, Adventure Time’s otherworldly Ice King and Marceline are joined by the We Bare Bears. There are hidden chase figures to collect, too! 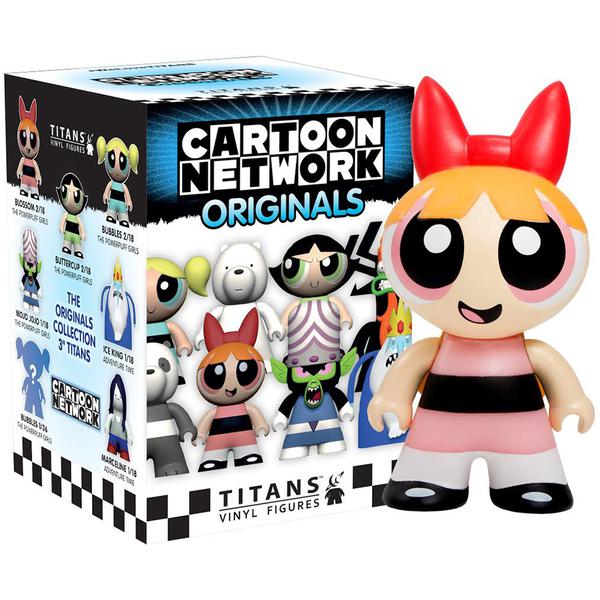 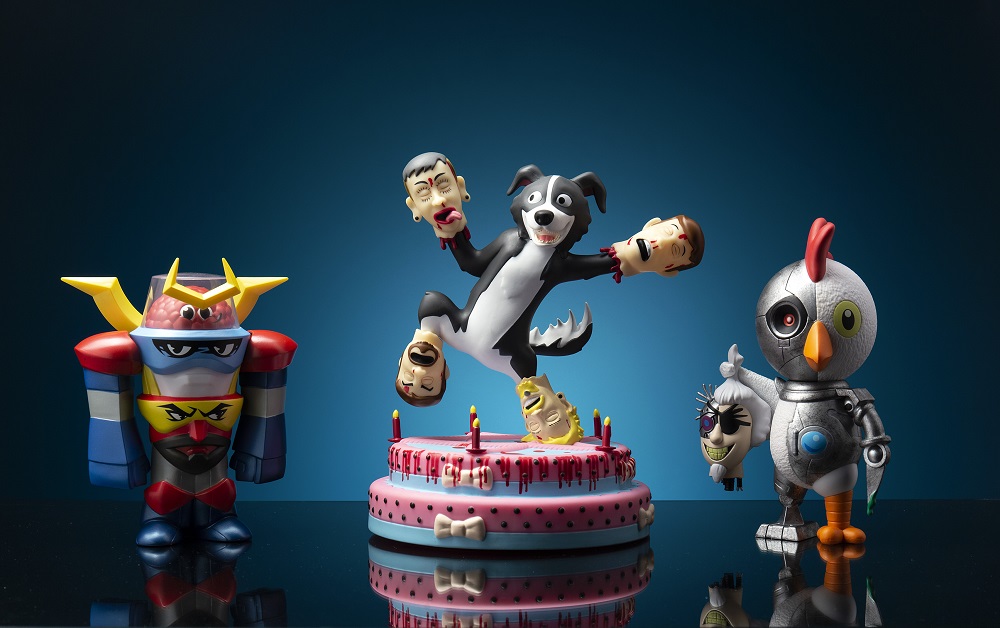 For the Sporty-types there is: 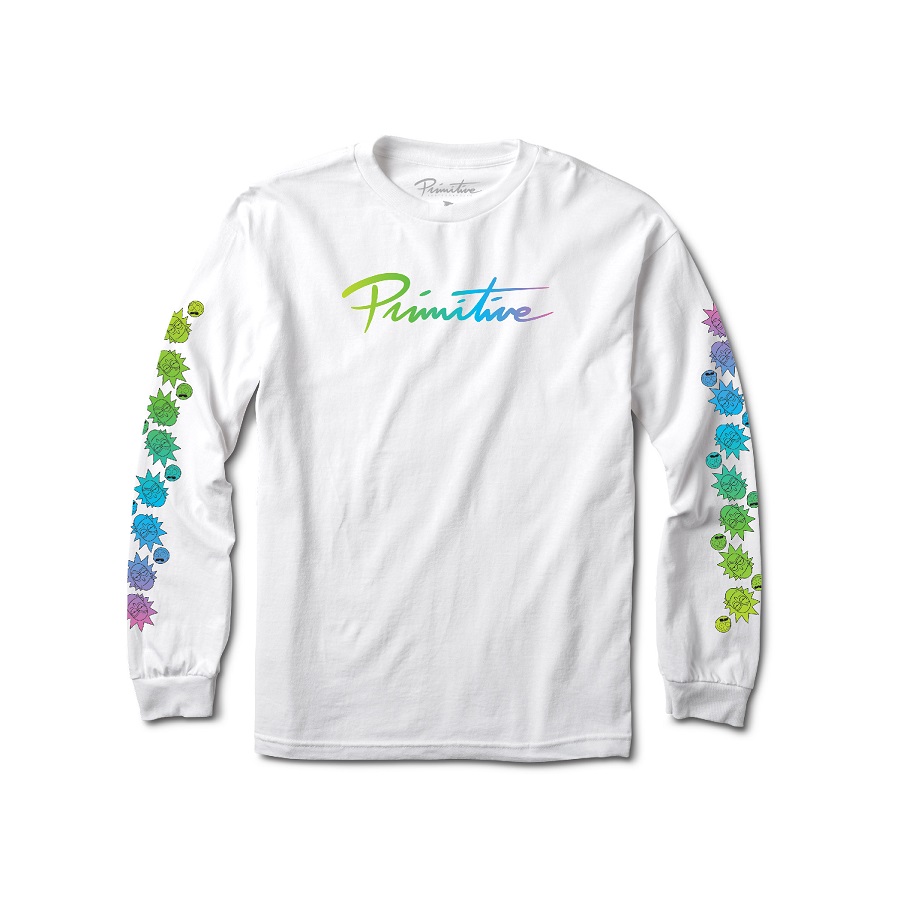 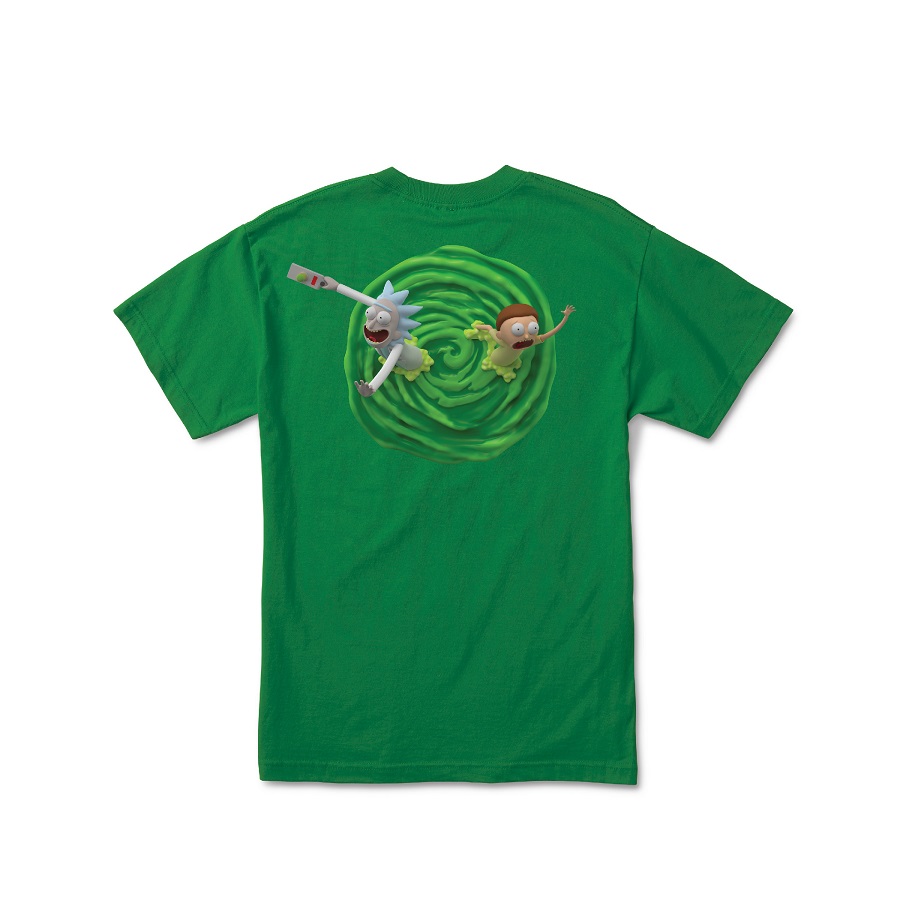 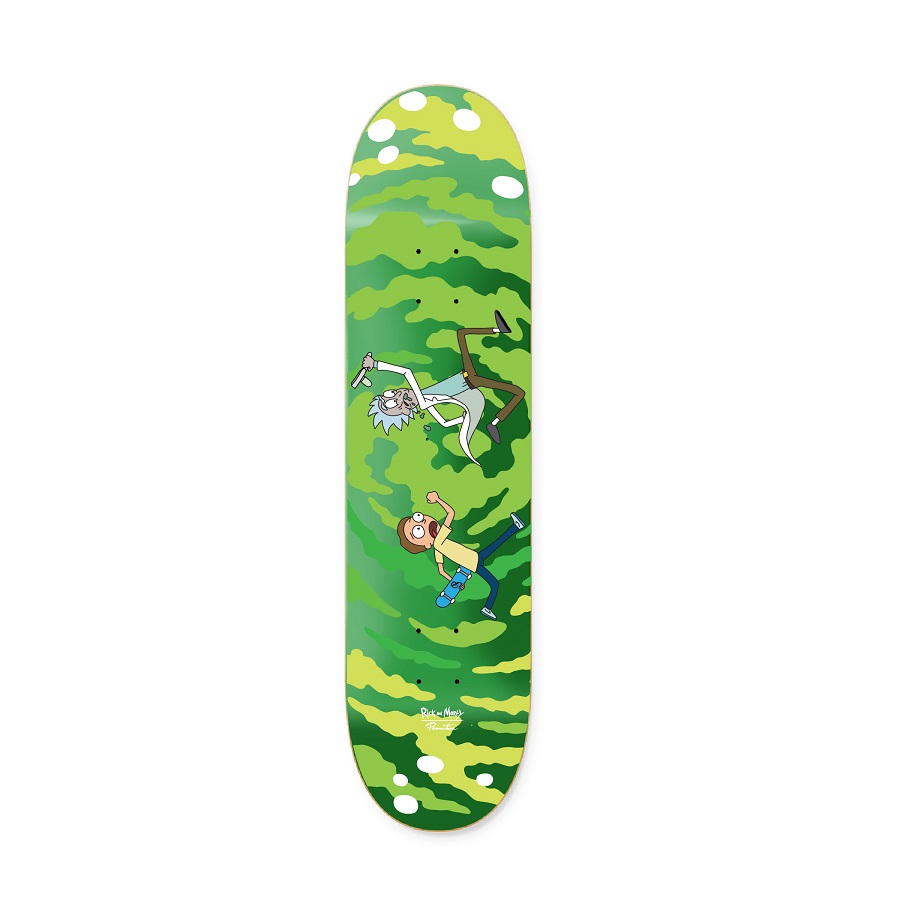 Cruise in style “and get schwifty” with the new Portal Team Skateboarding Deck (MSRP $65), featuring Rick and Morty on a fully colored foil background.

What do you think of the geeky holiday gift offerings from Cartoon Network Enterprises? Let us know.

Previous:‘The Ladybug’ Is An Enjoyable Animated Film About Following Your Dreams – DVD Review
Next: The Lion King Trailer For The CG Adaptation Is Beautiful!