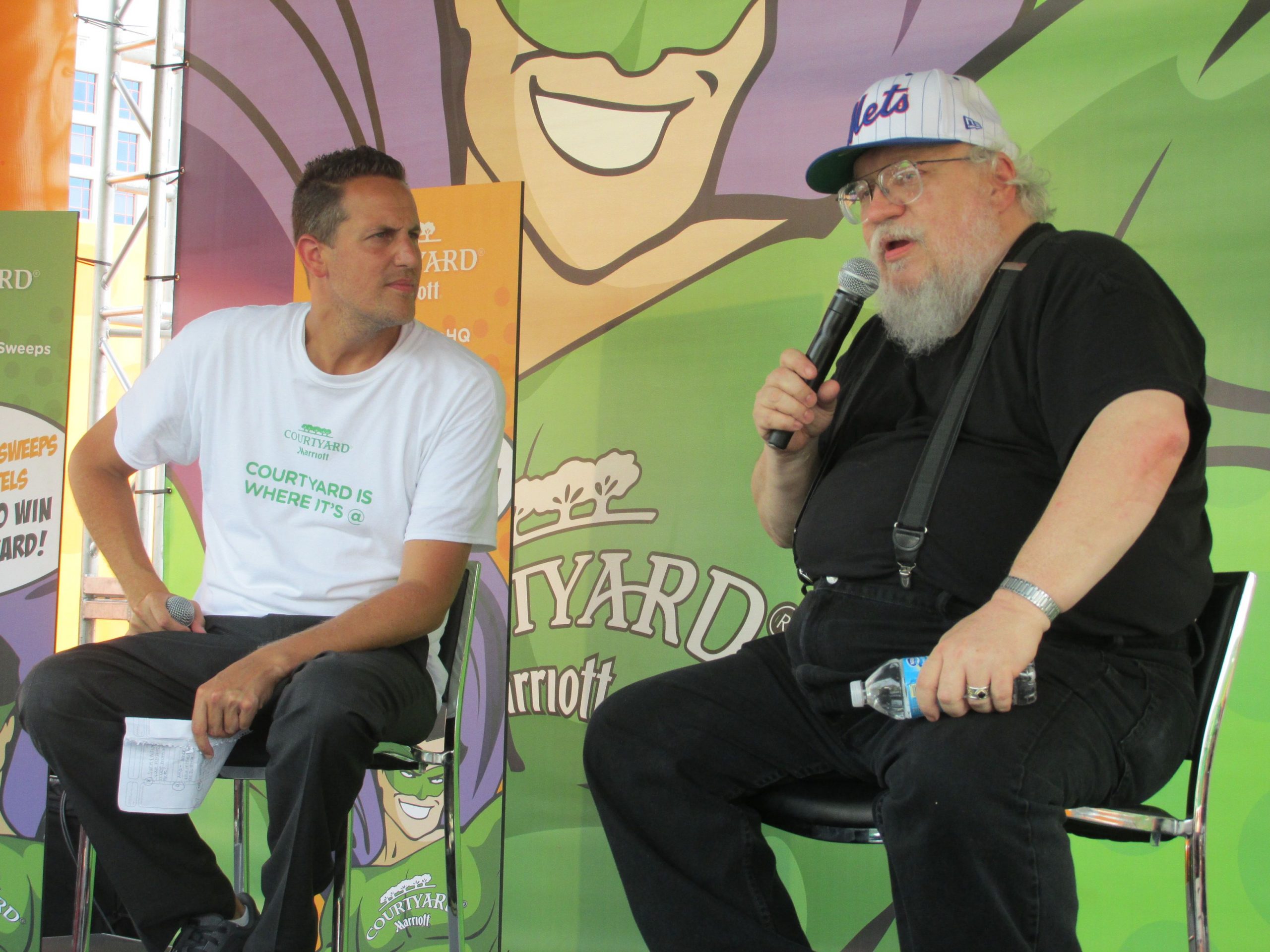 As I mentioned in my article Comic-Con: A First-Timer & Cosplayer’s Perspective, I was lucky enough, as a member of the press, to be invited to cover the Courtyard Marriott’s “SuperHero Headquarters” activities. And they were so much fun that even after writing this, I’ll have at least one more article in me! But as a huge fan of George R.R. Martin and his Song of Ice & Fire series, this one of course had to come first.

Now, I’ve read and seen videos of many of Mr. Martin’s interviews, and I also attended his reading at ConCarolinas back in May, but this particular Q&A featured some really great questions to prompt his always-thoughtful answers.

A long-time Comic-Con attendee, Martin has seen the convention change a lot over the years, but in the end the main thing that’s changed for him about being there is that he can’t walk the convention floor anymore – at least not without a lot of security. Although he has been writing both fiction and television for many, many years, it wasn’t until recently that this became an issue, but that particular topic did lead to more discussion about how long he’s been writing. Mr. Martin said, “I had a passion for writing as long as I could remember, even when I was a little kid.” He wrote stories and sold them for a nickel, so, “If I sold two stories I could get a comic book.” That certainly makes me wonder whether any of the people who bought his stories still have them – or at least wish they’d kept them! (Spoiler alert: my guess is yes, they do.)

And from the beginning he loved comics, horror stories, and the like – “Weird stuff, my father called it,” he clarified. His father was a longshoreman who loved westerns – clearly a far cry from what we usually see from George R.R. Martin.

For someone who has been writing most of his life, it was interesting to hear his thoughts on writer’s block – whether he gets it, and how he finds inspiration if he does. “I don’t get writer’s block in a conventional sense, where I can’t write for long periods of time. I do get derailed by distractions…I do my best writing when I’m not distracted…just leave me alone and let me write. That’s when I get my best work done…but when I do get stuck, especially on a project like Game of Thrones, the best thing I find to do is rewrite.” Essentially, he will re-read/re-write chapters that he’s already written, and in the process, polishing prose and the like. While I personally do get writer’s block, I’ve utilized this very method before and I can attest that it has worked for me as well…though of course, I’m no GRRM, and I’d definitely suggest taking his writing advice over my own.

And lucky for us, he’s generous with his advice. When asked who his inspiration was for the Starks, Martin pronounced, “I stole freely from history.” He made his usual mention of the books being based on the War of the Roses, but was careful to clarify that “The individual Starks are not based on any members of the York or Lancaster families.” Later, when asked about other real-life inspiration for his works, he explained, “What you do in fantasy…you start with Hadrian’s Wall, which is fifty miles long and ten feet high, and you make it a hundred miles long, or three hundred miles long, and seven hundred feet high, and made of ice and magic.” 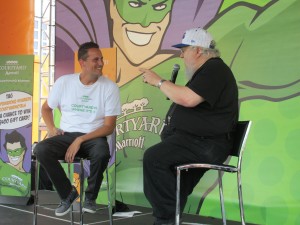 I was really excited when all this talk of history prompted the question of whether Martin always had a passion for it. “I love history,” he said – he was a journalism major in college, but he minored in history. I must agree with him that academic history like crop rotations in Europe isn’t overly interesting, but the wars and the battles and the betrayals are. I love that he pointed out how “History is just full of stories, wonderful stories, that a writer can steal from, because they really happened, or at least someone said they really happened…I’m constantly reading popular history books, old or new, and saying to my wife, ‘You can’t make this shit up!'”

In terms of advice specifically for new writers, Martin insisted, “Start with short stories.” He compared starting writing with a seven book fantasy series to taking up rock climbing and starting with Mount Everest, and finished by reminding us that writers should “Read everything you can get your hands on.”

Though he may not have any of his real-life experiences or people he knows in mind when writing his Song of Ice & Fire series, George R.R. Martin freely admitted that if he was a character in that series, he would be Samwell Tarly. He went on to say that “Tyrion might be who I want to be, but Sam is probably closer to who I actually am…the fat kid who likes to read books and doesn’t like to walk up a lot of stairs.” But as for how he would kill himself off if he was a character in the books or on the show? “Tyrion…he’s asked this very question.” For anyone who doesn’t recall the scene Martin is talking about, Tyrion’s answer is, “In my own bed, with a belly full of wine and a maiden’s mouth around my cock, at the age of eighty.” (If only we could know that’s actually how Tyrion would die, am I right?)

In terms of his books being turned into a television show, because he worked in the industry before it’s clear that he knew what he was doing when he turned down the studios who approached him, many in the wake of the success of Peter Jackson’s adaptation of Lord of the Rings. “My books are bigger than Lord of the Rings,” Martin pointed out. “They’re just physically bigger. There are more characters, it’s a longer story, there are more settings, there are more battles, there’s more of everything. The entire three books that Tolkien wrote, as brilliant as they are, could be fit into one of my books. And I was able to say no until I found the right partnership.” 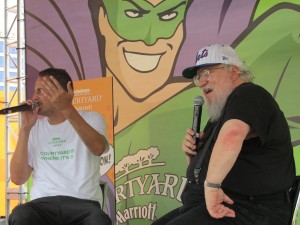 He also learned how to distance himself from the changes being made to his work, and it seems as if he’s going to be even less involved in the show’s production in the future – the big piece of news he gave is that despite having written one script per season for the first four seasons, he’s not doing it for season five, because he’s “kind of busy at the moment”. (Which, by the way, prompted a cheer from the crowd, though later someone still asked him how he was doing with the next book. I’m beginning to wonder if that question will ever not get asked…)

As Mr. Martin has written television as well as novels, it seemed only fitting that one of the questions was about his recent/current favorite television shows. “We’re living in the golden age of television,” he explained. “There’s more interesting television on right now than has ever been on in all of history.” He followed this statement by listing some of the shows he loves – those being Breaking Bad, Mad Men, Walking Dead, and Orphan Black. “They say you write what you want to read, and you create in television what you want to watch,” he pointed out. “Predictable shows bore me. Predictable books bore me.” Well, there you go, Game of Thrones fans – suggestions of unpredictable television shows from The Man Himself!

But is he working on anything in television at the moment? Well, no – however, he’s got plenty of awesome news about his Wild Cards series. There are three original graphic novels in the works, and they’re stand-alones, not adaptations of already existing novels. Additionally, Wild Cards is under option as a feature film, though he was careful to mention that he won’t be making any official announcements about that until the cameras start rolling.

Finally, there were a few questions that gave us more glimpses of George R.R. Martin and the things he loves. When asked if he preferred Batman or Superman, he chose a third option – “Spiderman…for a single hero” – but went on to say, “I like teams. I like the Fantastic Four…one of them is a monster, that was really interesting to me.” When the question moved on to books that affected him, he again brought up Lord of the Rings, but also mentioned The Great Gatsby, before making the interesting statement, “The green light at the end of Daisy’s dock…I’m still chasing myself.”

Although Mr. Martin did admit that if he wasn’t writing, he’d probably be teaching (and he did in fact teach for a little while, some time ago – lucky students!), he also went into great detail about all of the opportunities that writing has opened up for him, and all of the things he’s done that he never thought he’d be able to do. “Writing has taken me around the world…in Bayonne, New Jersey, where I grew up…I lived in a world that was five blocks long…With [reading] books and comic books, that took me to other planets, that took me to other parts of this world, to other times of history, to strange alternate worlds, through the power of imagination. And when I started writing and publishing…and became successful, suddenly the real world opened up to me.” Basically it led to him traveling the world, and in fact he gets so many invitations that he can’t accept quite a lot of them. But he made sure to conclude his answer with a quote from A Dance with Dragons – “A reader lives a thousand lives before he dies…The man who never reads lives only one.”

The last two questions were one very important question, and one silly question. First Martin was asked for just one small teaser for the next season of Game of Thrones, to which he replied, “For season five, I think you’re gonna really enjoy meeting the Martells of Dorne. Particularly Oberyn Martell’s three daughters, the Sand Snakes…and I hope you like them, because you’re also going to be seeing a lot of them in The Winds of Winter.” I’d say that’s not just one teaser, but two! And finally, the Courtyard Marriott SuperHero HQ question of the weekend was, “What three things would you bring to a desert island?” George R.R. Martin certainly got a good chuckle out of the audience when he said a boat, a radio, and “Can I bring both Ginger and Mary Ann?”

As I already mentioned – and as you can hopefully tell – this interview was truly enjoyable, and I have to give a huge shout out to Courtyard Marriott for sponsoring such a great event! But stick around because there’s more to come – including a recap of their fun costume contest hosted by Norman Reedus and Greg Nicotero, as well as my own personal experiences with Norman Reedus and with George R.R. Martin! 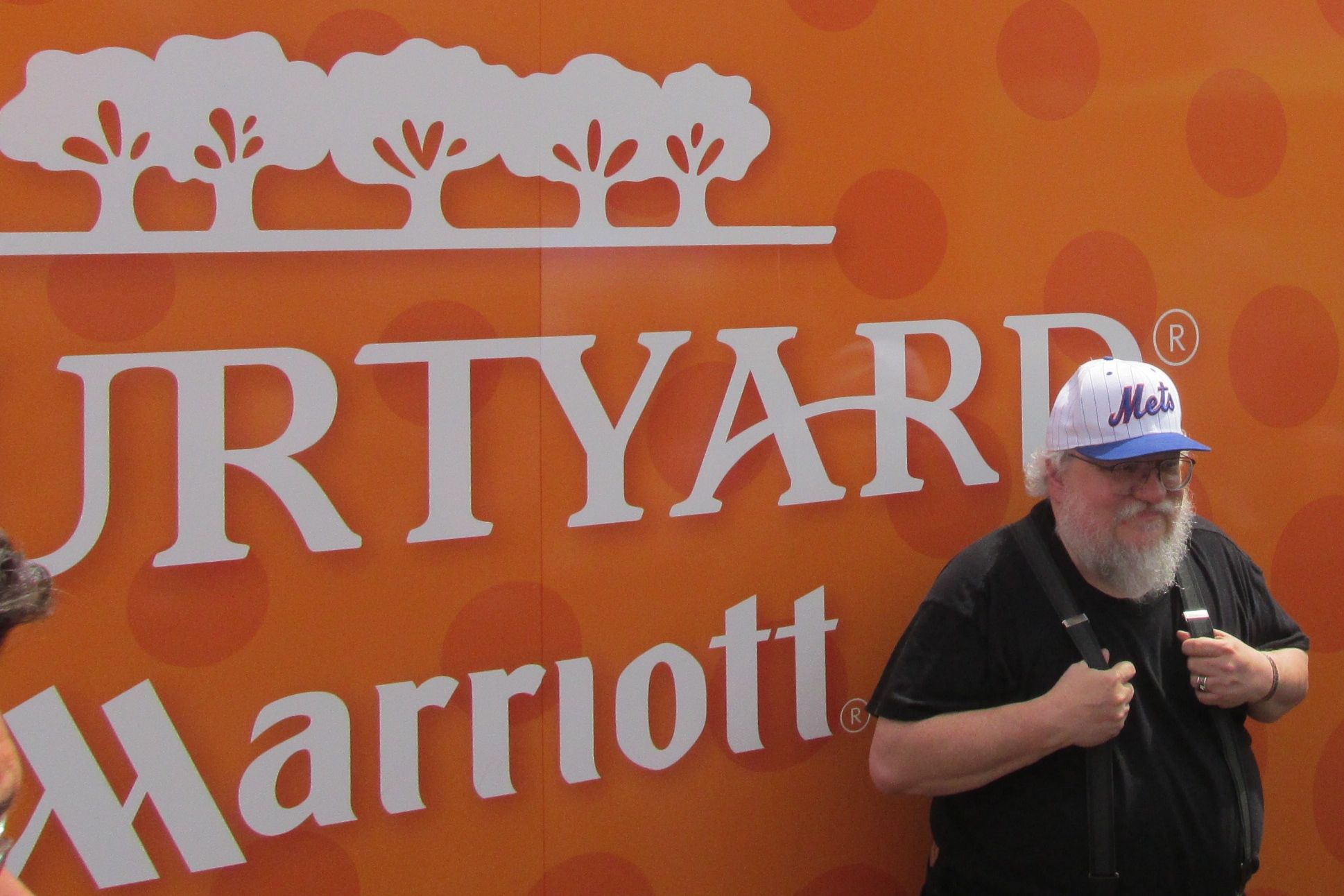