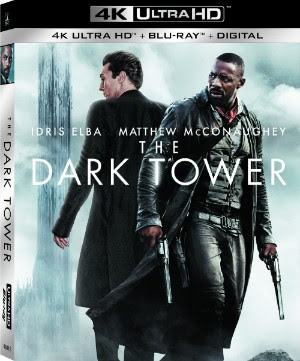 Sony Pictures Home Entertainment will be releasing the Idris Elba and Matthew McConaughey sci-fi western film which is based on the famous book series from Stephen King. Idris Elba plays Roland, the last Gunslinger who is “locked in an eternal battle” with the Man in Black (played by Oscar winner Matthew McConaughey) in The Dark Tower.

Based on the best-selling book series by highly-acclaimed author Stephen King. The last Gunslinger, Roland (Idris Elba), has been locked in an eternal battle with the Man in Black (Matthew McConaughey), determined to prevent him from toppling the Dark Tower, which holds the universe together. With the fate of the worlds at stake, good and evil will collide in the epic battle as only Roland can defend the Tower from the Man in Black.

Fans can expect a lot of enjoyable extra content in the Blu-ray release including deleted scenes, a blooper reel and “A Look Through the Keyhole,” featuring three vignettes narrated by Roland as well as The Man in Black. There are also a total of five behind-the-scenes featurettes.

The ‘Last Time Around’ feature shows the filmmakers and Stephen King reveling “the plot points that allowed the film to pay tribute to everything great about the novels while making it a whole new experience for fans. In ‘The World Has Moved On…’ fans will be able to “step inside the fully realized sets and locations that play host to the physical embodiment of Stephen King’s Mid-World.

Matthew McConaughey will take “the audience inside his perceptions and process for portraying the villain Walter, aka The Man in Black” in ‘The Man in Black’ Feature.

Furthermore, fans will get a look behind-the-scenes and inside the stunt team’s process “for creating the action-packed battles” in ‘The Gunslinger in Action’ feature.

And Stephen King “discusses the journey from his book series to screen” in the ‘Stephen King Inspirations’ feature.

The DVD Extra Materials Include:

The Dark Tower has an approximate run time of 98 minutes. It is rated PG-13 for thematic material including sequences of gun violence and action.

Are you excited for The Dark Tower Digital, 4K Ultra HD, Blu-ray and DVD released this October? Let us know.