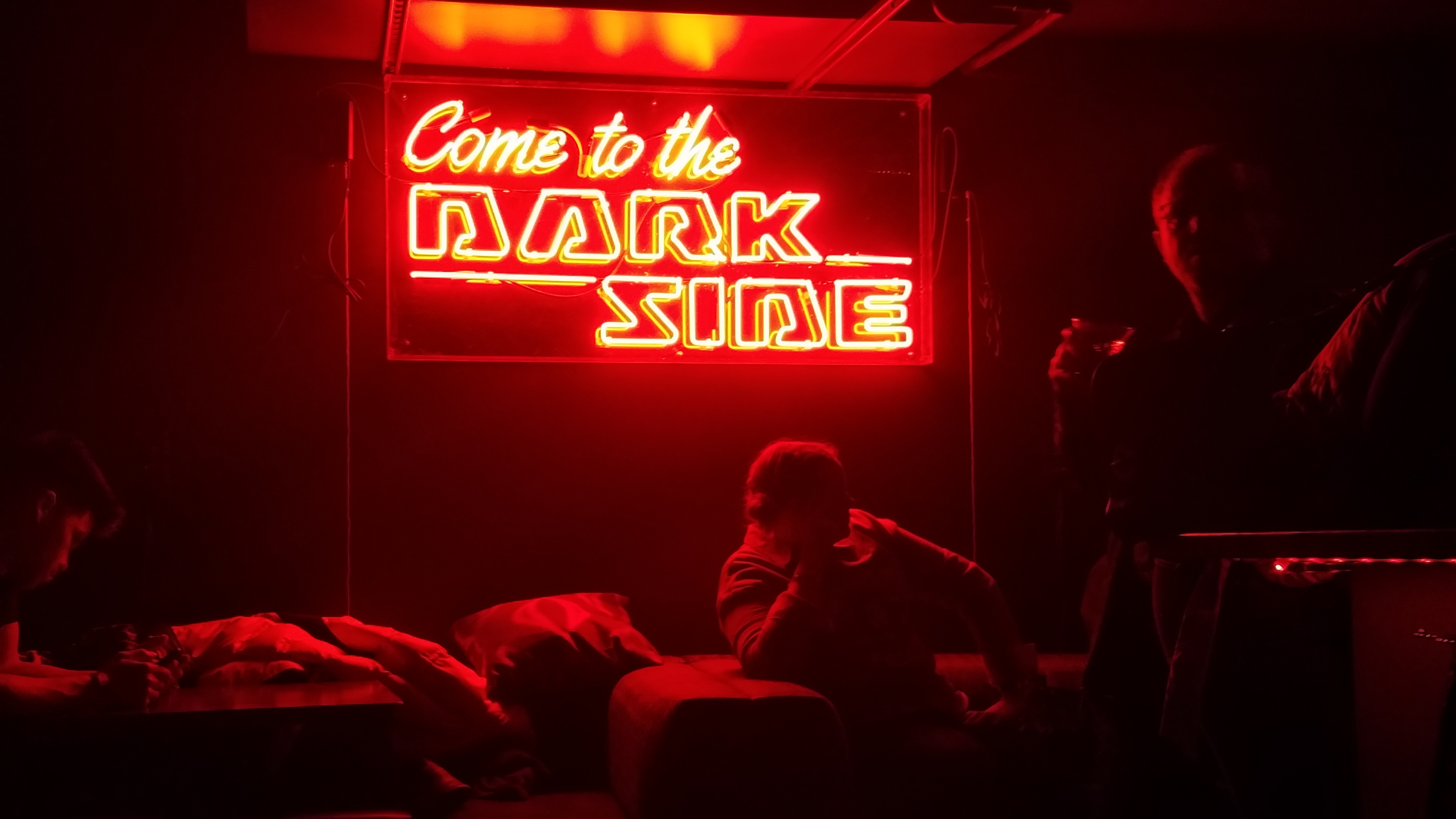 Washington, D.C. is one of three cities playing host to the Darkside Bar, a Star Wars-themed pop-up experience meant to simulate a dive bar frequented by Stormtroopers. I took a group there last weekend to check it out.

The Darkside Bar has locations in New York, Los Angeles, and DC. Zach Neil, its creator, has run other limited-time themed restaurants: Stay Classy (a tribute to Anchorman), the Beetlejuice-centric Beetle House, and New York’s hilariously super-patriotic ‘Merica. Neil described the Darkside Bar as a hangout for the dodgiest members of the galaxy, saying, “It’s supposed to be that you’re in a bar inside the Death Star, or a bar where a Stormtrooper would go after work and complain about how mean the Emperor was to him that day.”

Does it measure up to his vision? To find out, I headed to the DC location on Saturday night. It’s right above Mythology lounge in an appropriately dim and narrow space. The lighting is almost entirely red with just enough other lighting that the red is cool rather than hard on the eyes. I’ve been to enough dive bars and pop-ups that I wasn’t surprised by the cramped space, but others might be. This is definitely not large costume or wheelchair friendly, people.

There are two bar areas on either side of the door with tables along one wall. A small dance space sits in front of a pretty decent wall piece made to look like a window from a space ship. There’s also a tiny tiled dance floor where costumed dancers performed most of the time I was there. They were one of the best parts: each wearing some kind of costume and twirling light-up props as they danced. One dancer did a clever number with a glowing baton and dark straps that made it look like she was using the Force.

While it’s not an officially licensed event, the Darkside Bar doesn’t play coy with the Star Wars references. A Stormtrooper in 501st quality armor took our tickets at the door. Darth Vader danced through a few times to force choke dancers in between selfies. The world’s most misused Sith apprentice bussed tables, lightsaber hanging from his belt, and there were blasters decorating the walls. Very cool.

My first impression of the Darkside Bar was a vague disappointment. It was dark, there were lots of people standing awkwardly around in costume, and every single thing was sticky. We couldn’t find somewhere to sit. The music was loud and not very nerdy. I get that they wanted to appeal to the average DC club-goer, but with such a nerdy theme I would have loved to hear electro swing. Maybe a little Figrin D’an and the Modal Nodes. The dancing patrons seemed to love it, at least; there was zero room on the dance floor.

After a few minutes, though, the Force-wielding dancer took the stage and the music changed. It was still loud, but a little nerdier. The Sith apprentice appeared to begin cleaning up the sticky everything. Darth Vader came over to take some selfies with my table. People started talking to each other, and the atmosphere changed. 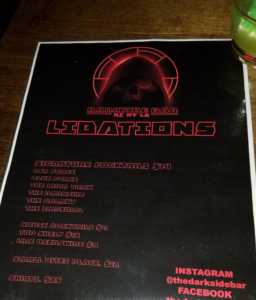 These drinks were deceptively strong. Make sure you take the Metro or Uber home.

We traded in our two wooden drink tokens for a round of glowing drinks (anything besides the special menu has to be bought with Earth Money). The drinks were full of the kind of cheap liquor you might expect an evil Empire to stock, mixed with enough sugar to make them drinkable. Some were on fire. (Pro-tip: Do not drink the Imperial. Everyone at our table agreed it tasted like lighter fluid, no matter how long we let it burn.)

My friends love to dance, so we requested “Fette’s Vette” (otherwise known as “that one Boba Fett Song”). It didn’t happen. We danced anyway, and when our two hour block was up we were tired enough to call it a night.

The general consensus was that it was fun if you were willing to let it be fun. I did see a couple guys who seemed upset that wearing a dark cloak and being moody wasn’t winning them lots of attention, but mostly people seemed jazzed by the experience. My recommendation would be to go with friends, drink awful flaming drinks, and have fun. It worked for us.

The Darkside Bar runs through mid-January. Reservations are strongly recommended – you’ll save $7 a person – and can be found for all three locations on their website. Check their Facebook page for events like Geek Dating and Alien Burlesque Shows, or just drop in when you have the time.

Have you been to any of the Darkside Bar locations? Share your experience in the comments section!