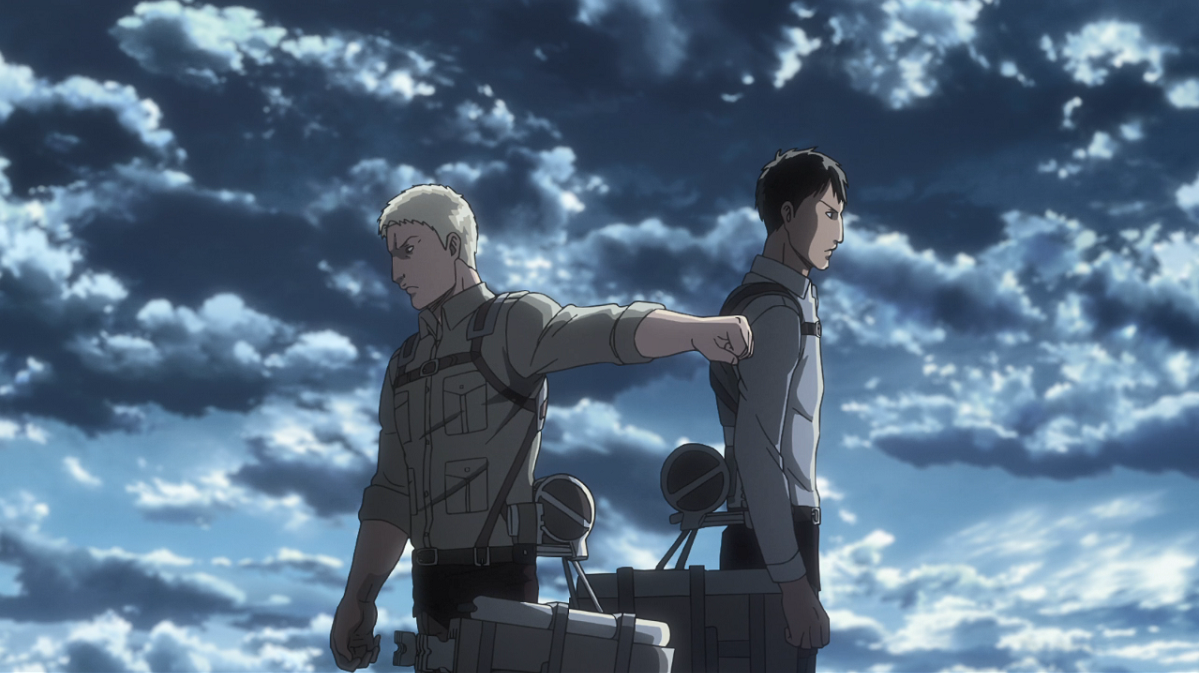 It’s been a while since I’ve been disturbed by an episode of Attack on Titan. I’m not the best with gore and violence but after watching enough episodes, I’ve mostly become inured to it. However, “Descent” was just viscerally uncomfortable. 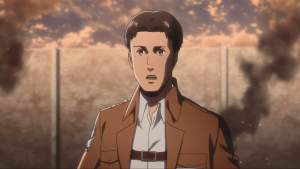 “Descent” begins with a flashback, showing us a character we haven’t seen since season 1. At long last, the secret of Marco’s death has been revealed…and it is horrifying. It turns out Marco discovered Reiner, Bertholdt, and Annie’s secret first, and they killed him for it – by waiting for a Titan to approach and then removing his EDM gear so that he would get eaten. That scene was just so awful. I regret my decision to watch this episode while eating dinner. Not just for poor Marco’s horrific death, but for those terrible, nauseating screams.

What this awful event shows is a) how much our Titans in disguise (Bertholdt, Reiner, Annie) were willing to do to keep their secret and b) how much this messed them up. Reiner developed a separate personality to deal with the trauma, for crying out loud. “Descent” also gives us a peek at what the Titan-shifters think of humans, which makes me wonder just what happened a hundred years ago to cause this animosity. I mean, Titans literally wander around eating people for funsies and humans are evil? I am very curious to learn this history.

Bertholdt was amazing in this episode. Up until now, he’s sort of been in Reiner’s shadow, never saying much or taking the initiative. This episode probably features the most amount of dialogue he’s ever said throughout the entire series. His is the character with the most amount of change so far, I think. The scene with him and Reiner where Reiner flat out tells him he’s kind of weak does a great job of highlighting how different Bertholdt is in this episode. Mikasa and Armin commenting that he seemed like a different person also hit you in the head with it. 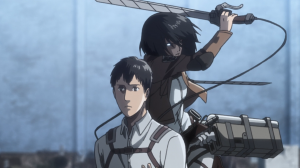 Speaking of Mikasa… That fight scene! That was some quality fighting. As amazing as the humans v. Titans fights are, it’s nice to see that Attack on Titan can deliver in moments like this as well. Mikasa going after Bertholdt gave me the same flutterings in my belly that Levi’s entire existence did in “Pain”. This is your gentle reminder that Bertholdt was the third top-scoring recruit from the 104th. And Mikasa just chopped off his ear.

In Titan-related news, Beast Titan has a name: Zeke. Also, the quadrupedal Titan that some theorized was a shifter does indeed seem to be a shifter, as he has the ability to speak – an ability that so far only Zeke’s Titan form seems to possess. Also, Zeke mentioned taking away Reiner’s armor ability – something that’s been hinted at with Eren and his coordinate power.

This show continues to be amazing. Whereas last week’s episode ended with what felt like overwhelming victory, this episode ends with what feels like overwhelming defeat. I mean, if Reiner was somehow able to survive the thunder spears despite getting half his head blown off, what hope do any of our squad members have to defeat the Colossal Titan?

Have you seen “Descent”? What did you think?