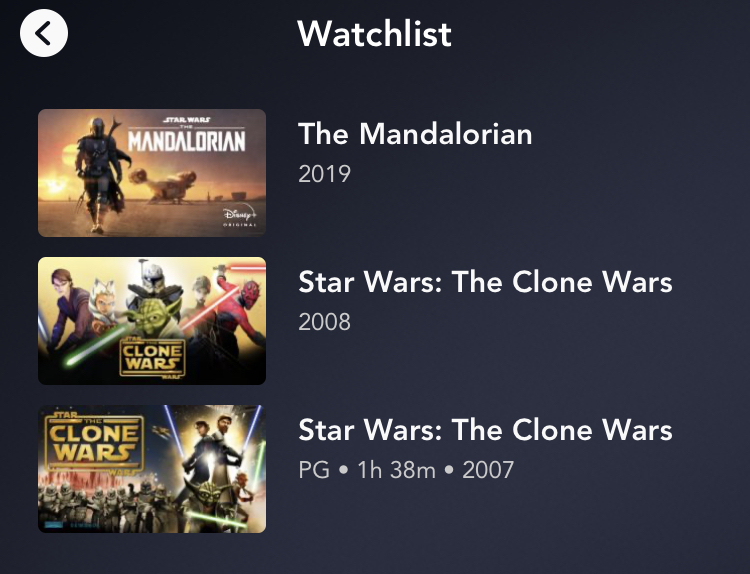 So far I’m immensely enjoying the content available on Disney+, but their watchlist system has a lot of room for improvement.

UPDATE 11/19/2019: Less than a day after writing this piece, the Disney+ Gods smiled down upon us and they will be implementing improvements in the watchlist feature.  They told Business Insider that ‘a “continue watching” feature would launch shortly.’   There’s no estimate on when this feature will launch or what it will look like.

The Disney+ watchlist is basically good for keeping track of titles only. The watchlist does that part well, but is otherwise a fairly useless feature that doesn’t help you actually keep track of what you’re watching. There’s no indication about which title you were watching last, what episode you left off on, or even how much of that episode is left to go. You have to scroll and click on episodes that look unfamiliar and hope you don’t accidentally jump ahead and spoil yourself.

A “continue watching” feature, like Netflix and Hulu have, would resolve this issue. This could be placed within the watchlist itself, or as a separate feature on the home page. You can keep a place marker of where you left off with all these wonderful shows and not have to stab around in the dark hoping you click on the right episode.

I’m aware this seems like a petty thing to complain about – at most it takes 30 seconds to five minutes depending on how terrible you are at guessing where you left off. And I also get that Disney+ wants to be something different and not a direct copy of already existing streaming services. But still, when you are comparing a brand new shiny service to their predecessors, this kind of small detail and inconvenience is going to come up.

In this case, it’s a pretty notable inconvenience having a common useful streaming service feature neglected. Disney rolled out an incredibly lineup of programming, but failed to make the product they were using to deliver that content user friendly or convenient. I hope this is something they consider in a future update, or our binge watching habits are bound to get mildly annoying in the future.