Doctor Strange: The Good, The Bad, The Squee

Doctor Strange is a quality film deserving of its high fresh rating on Rotten Tomatoes, but like almost all other recent Marvel films, it’s also quite problematic.  Let’s break this down.

Spoiler Warning: The Good and The Bad segments of the Doctor Strange review are spoiler free besides what’s in the trailers and basic comic book canon.  But The Squee is pretty much wall to wall spoilers so skip that segment if you haven’t seen the film. 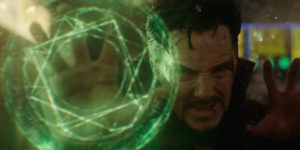 In general, I thought Doctor Strange was spectacularly well crafted.  The effects are gorgeous.  Benedict Cumberbatch, Mads Mikkelsen, and Tilda Swinton are all in top form.  While the plot does feel rushed at some points, it still managed to tell a cohesive story arc and convey the hidden depths to all of the main characters.  Being able to do that is no easy task.  Simply put, it was a well constructed film on all levels.

It’s also one of the most visually stunning films I’ve ever seen.  At one point a character compares the effects of the “magic” to psilocybin (aka Shrooms), and that’s not too terribly far off the mark.  It’s trippy, man.  There’s time and matter bending that could very well give you a wicked sense of vertigo.  There’s also bright flashy light effects, though, so people sensitive to those effects should probably be a bit cautious.  Doctor Strange has knocked Guardians of the Galaxy out of my top spot for most visually interesting Marvel film to date.  If you can afford to see it on the largest screen possible, do so.  I saw it in 2-D, but I can imagine a 3-D version would be mind-blowing.

Also worth noting is what this film does for the MCU.  To date the MCU has dealt with primarily scientific interpretations of superhero powers.  The biggest stretch was Wanda’s powers or Vision’s very existence, but beyond those two anomalies all of the heroes are very science fiction related.  Even Thor, who is a God, compares their ‘magic’ to science.  Doctor Strange blows that out of the water.  They’ve introduced honest-to-god magic into the MCU and they don’t bother trying to explain the wonder away with science.  The closest they get to dabbling with science is comparing the ‘spells’ to ‘programs.’

We’re entering a new era for MCU films and I’m incredibly excited.  We have science.  We have magic.  We have the Avengers protecting earth, the Guardians protecting the galaxy, and Doctor Strange protecting our spiritual realm.  Guys, this is an amazing time to be alive. 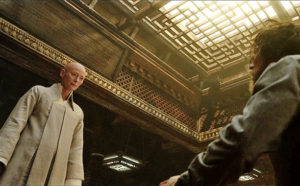 If you’ve been keeping track of chatter prior to the film’s release, you know that the production has incredibly awful track record in regards to race.  None of that goes away in the context of the film.  In fact, there are several moments that make it even worse that I’d imagine it could be.

First and foremost we have the white washing.  Tilda Swinton’s character The Ancient One is supposed to be a Tibetan man.  In the film it’s a white woman.  While it may seem to be a good thing to gender swap a character to have more women play a central role to the narrative (still doesn’t pass the Bechdel Test, by the way), that doesn’t erase the fact that you took away a POC role.  No amount of excuses can take that back.  And trust me, I’ve been reading all of the excuses.  They aren’t helping the situation.

But an even bigger issue for me is the blatant White Savior syndrome that’s so central to the premise.  A white guy goes off to the east to study mystical magic (another trope: Magical Asian) and then the white guy becomes the hero (another trope: Mighty Whitey).  Of course the aforementioned white washing has even effected this issue.  While Doctor Strange runs away to Nepal (instead of Tibet, thanks China!) to find himself, the Ancient One is actually using Celtic magic.  I suppose they figured that’d be less offensive somehow? If they were going to white wash a character, they might as well just go all the way?  While the comic version of the Ancient One mastered magic from all around the globe, it’s interesting that they chose to narrow in on the one major historically white ancient religion in the film.  I don’t even know where to begin with that one.

For a lot of people, these issues are too far.  I understand that.  I’ve broken up with TV shows for similar issues (still haven’t returned to The 100, thank you very much).  I understand that completely.  For those of us who choose to stick with the MCU, we definitely need to make it clear to not just Marvel, but all of Hollywood, that this just isn’t okay.  Some will do this with their wallets.  Some will take to social media.  Others may write furiously about it on the Internet in the hopes that someone in charge will eventually notice the criticism.  These issues are far too frequent in films.  It makes even an incredible film like this leave a bitter after taste. 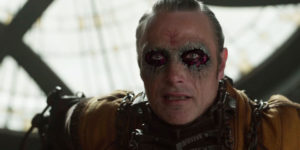 Despite everything that happened in The Bad section here, I did overall enjoy the film.  And it seems like many fangirls out there agree.  There was a lot to squee over.  People who want to avoid spoilers, turn back now.

Things I squeed over in no particular order:

Sadly, however, Edna E Mode would have been highly disappointed.