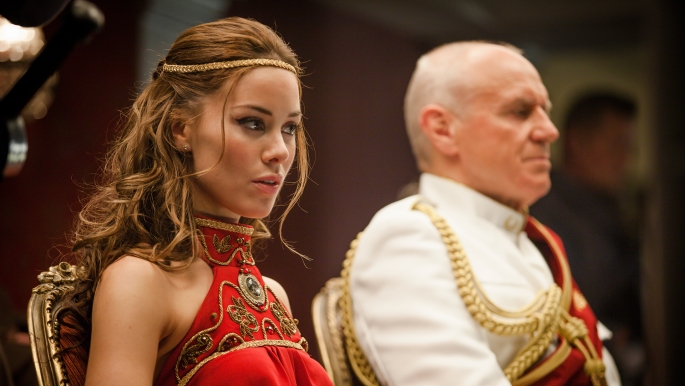 It’s easy, as a television critic, to become jaded: having to critique shows for the same things over and over again can make you leery of new shows, and what should be a time period of excitement and anticipation becomes wariness. And with good reason: in just the past few months we have seen new shows quash the hopes of fandom and shows panned for quality before they even air.  I found Dominion to be promising from the start, but my review of the first three episodes came with an air of skepticism as I waited, expecting SyFy’s newest offering to let me down in some way too.

I’ve never been happier to report that I have been proven wrong in my worries for the future of the series.

Dominion has become more complex every episode, layering rich science-fiction and fantasy mythology with character development, building their voices and bringing the individuals within this world into sharper focus. With the first six of nine episodes aired, we’re entering into the final stretch of Dominion’s freshman season.

Many shows start strong and peter out; Dominion has been picking up steam every episode, both in terms of advancing the plot and generating online buzz. Dominion’s cast and crew could certainly give tips to seasoned shows on how to engage viewers directly with humor, respect, and verve, with the show-runner, stars and crew easily accessible, responsive, and incredibly fandom-positive. Fan interactions aside, it’s the story that takes center stage every week.  “Black Eyes Blue” was a testament to how far the characters of Dominion have come in six short episodes, completely putting to rest my fears that the people would be overshadowed by the tome of mythology that Dominion has to draw upon.

Each character’s motivations and secrets are coming into play, revealing central conflicts which draw more from human experience than the “Heaven got pissed at Earth and declared war” story that began in the movie Legion and carried over into Dominion. While Legion relied heavily on CGI, body horror and effects, it’s not necessarily Dominion’s signature winged higher angels or ‘Eight Ball’ wall-crawling lower angels that are the true monsters.

Dominion offers a very human conflict, wrapped in an appealing package with themes that resonate with viewers. The ensemble cast portrays them to meet a range of human frailty and strength. In many ways, this is a show about the destruction and reconstruction of family. From Claire’s heart-breaking final scene with Clementine, to William’s rib-breaking scene with David, “Black Eyes Blue” pointed the spotlight directly at the divide between generations.

The Sins of the Father 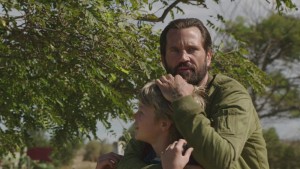 In the pilot episode, we learn that Jeep abandoned Alex in an effort to protect him, to study the tattoos and learn how to help him. That abandonment, no matter how well-intentioned, built Alex’s resentment towards the man he regards as a father. In the absence of family ties, Alex builds his new family in the Archangel Corps, as they’re all he had, and his family becomes Noma and Ethan, with Bixby as an adopted child to him. Then he acquires the tattoos that mark him the chosen one, and much like Jeep before him, he begins to distance himself from his loved ones. In “The Flood,” we’re treated to Claire scornfully pointing the similarity out to Alex after he declares an intent to cut his ties to keep his adoptive family safe. Claire asks if he’d like to write a letter to Bixby like Jeep did for him before abandoning him. In many ways, this sets the tone of the sins of the fathers passing on to the sons and daughters of Vega.

Claire’s father, General Reisen, has ruled Vega capably, bringing structure out of the chaos of the war, but he handles it with efficiency and expediency, putting aside idealistic notions. The end result is the V-System, a caste system even he recognizes is unjust, a corrupt and back-stabbing senate, and a daughter who picked up his political ruthlessness. He demands it of her at the start, insisting that she put patriotism before herself by arranging a marriage that will unite the power of Vega behind her. Reisen’s insistence that Claire enters into the political arena in preparation of her replacing him reveals that Claire, for all her ivory-tower princess reputation, learned at the knee of a soldier willing to manipulate the people and rewrite events to suit his political agenda. We’ve seen Claire’s idealistic view of the world erode as she finds herself pulled into the politics of Vega, and her compassion tested by pragmatism. She now holds most of the cards in the political system she is heiress to, by blackmailing both General Reisen and David Whele. 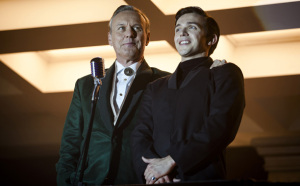 In flashback we see David Whele blame his son, William, for childhood cowardice resulting in the deaths of their family, and his view of his son remains unchanged until his ruthlessness and treachery are revealed. A man of flamboyant religion before the war, selling God and Heaven to the masses as a televangelist, David’s faith was destroyed with the death of his wife and two of his three children at the hands of the angels. This experience made him turn a scornful eye on any who believed in a benevolent higher power at work.  And at first glance, William seems to be the opposite of his father, a believer and a kind-hearted leader. In truth, William is the manifestation of David’s worst traits: his ruthlessness and political duplicity, combined with a faith that much like his father’s before him, is an act of showmanship in public and behind closed doors with the Acolytes, serving to elevate him personally.

Even among the angels, this is primarily a conflict of paternal neglect: Gabriel and Michael’s differing interpretations of their Father’s will, and the reason for God’s absence, began an extinction war that wiped out the majority of the population. They do not take family drama lightly up in Heaven, clearly. It’s hinted that Michael’s is a struggle for redemption and to preserve his Father’s creation (humanity). Gabriel wants to kill everyone to see if it brings Dear Old Dad back, and their sister Uriel. . . well, God only knows what she’s up to (if He’s paying attention at all). Whether God scorned his creations (as with Senator Whele to William), abandoned them in hopes that they would make the right choices under pressure (as with Jeep toward Alex), or shaped his angels to replace him as a ruthless higher power of the world (as with General Reisen to  Claire) remains to be seen. 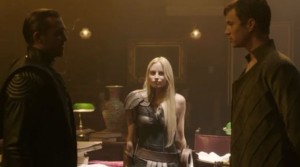 A large portion of the plot of Dominion hinges on characters acting upon the failures of the generation before them. Alex literally absorbs Jeep’s incomplete work with the tattoos, and adopts his issues when Jeep dies in pursuit of his cause of protecting humanity and Alex. Claire is placed into a position where she has to clean up her father’s mess by killing Clementine, in essence sacrificing another parent, and then forcing him out of power so that she can deal with his political failings. William elevates his father’s resentment and hatred of him and reflects it back, taking takes David’s accusations that he’s weak, and challenging David to be strong by physically torturing him in front of his cult. Michael fights to save humanity, thinking that it is his Father’s will and the only way to redeem himself.

“What I’ve sacrificed for you would make your blood run cold,” David hissed at William in “Something Borrowed,” and that is an inescapable truth in Dominion. Senator Whele, General Reisen and Jeep are product of a generation defined by the war they nearly lost, scrabbling to sustain humanity at any cost, ostensibly for their children. While their acts were arguably necessary, they left behind a legacy of well-intentioned extremism that passed down to the next generation: they sacrificed the ideals and innocence of their children to their causes.

So while Daddy issues abound in Dominion, that interplay of family, faith, patriotism, pragmatism, and a growing wealth of secrets and conflicting motivations keeps Dominion grounded in humanity, even while its mythology soars.

1 thought on “Dominion: Sins of the Fathers”