By now you’ve heard the news. E3 (Electronic Entertainment Expo) has been cancelled.  What does this mean for the summer con season?

E3 was not yet on my radar because, frankly, it’s scheduled for the summer and I’ve been trying to stick to events less than a month out (with a few small exceptions. See: Coronavirus Convention & Theme Park Impacts).  E3 was scheduled to take place June 9th-11th in Los Angeles, and I figured I might have to start talking about June conventions maybe mid April or so.

But no, friends, we’re already seeing impacts on the summer convention scene, so I guess we need to start talking about it now.  This outbreak isn’t going anywhere any time soon.  Buckle up.

After careful consultation with our member companies regarding the health and safety of everyone in our industry – our fans, our employees, our exhibitors, and our longtime E3 partners – we have made the difficult decision to cancel E3 2020, scheduled for June 9-11 in Los Angeles.

Following increased and overwhelming concerns about the COVID-19 virus, we felt this was the best way to proceed during such an unprecedented global situation. We are very disappointed that we are unable to hold this event for our fans and supporters. But we know it’s the right decision based on the information we have today.

Our team will be reaching out directly to exhibitors and attendees with information about providing full refunds.

We are also exploring options with our members to coordinate an online experience to showcase industry announcements and news in June 2020. Updates will be shared on E3Expo.com.

As of this morning, WHO has classified the COVID-19 outbreak as a pandemic, which is a very big deal.  With the official classification, many who may have been initially dismissive of the outbreak as something ‘sort of like the flu’ may finally sit up and take notice.  Finally.

“We have called every day for countries to take urgent and aggressive action.  We have rung the alarm bell loud and clear,” WHO Director-General Tedros Adhanom Ghebreyesus said today in a press conference.  With the alarm bell being run loud and clear, it’s time for more restrictive measures to be put into place by various regional governments around the world.

As of this writing, global cases have nearly reached 125,000 confirmed infections, but the general feeling among those of us paying attention is that this number is several orders of magnitude higher than what has been confirmed.  How high?  We don’t know and we may never know.  In much of the world, testing is severely lagging behind the need.

So with all of this in mind, cancelling a con the size of E3 is not a surprise considering the obvious severity of this outbreak, but the incredibly early lead time on this announcement is jarring.  Prior to yesterday the earliest cancellation was F8 in April.  Then in the March 10th update we had our first May convention cancelled, which pushed our watch list even further into the spring.  Now we’ve moved into June with E3’s cancellation, and perhaps we’ll soon start pushing into July.

E3 attracts well over 60,000 attendees each year, making it one of the largest cons in the country.  The only larger geek conventions cancelled at this time are Emerald City Comic Con (over 90,000 people) and SXSW (estimated at over 160,000 people).  It’s a huge loss for those that make a living on the convention circuit. 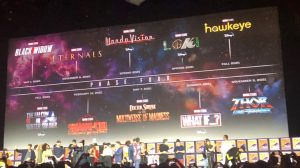 San Diego Comic-Con has already been on our list as that’s our major convention each year, though I initially felt like I was jumping the gun with even mentioning that one.  I was hesitant to even have it on there, but it’s clear the time to watch it has come.

We will now be adding Anime Expo (July 2nd-5th in Anaheim, California) to our list as well, as it’s one of the biggest anime cons of the summer and takes place in an increasingly worrisome hot spot.  We’ll also start watching WonderCon, which is scheduled for later in the Spring, and will likely have official announcements made before either AX or SDCC.  These are the biggies I didn’t think I’d need to watch quite yet, but here we are.

Have a summer con you want me to watch?  Just let me know!  With the E3 news, it’s clear I need to adjust the time frame I’m currently watching, but with hundreds of cons taking place every year, I can’t possibly know everything.  That’s where you come in, dear readers.  Help keep me in the loop!

But let’s pull back from E3 and the other summer cons for a bit, because a lot of upcoming spring conventions are getting cancelled, too.  Let’s break this down regionally like we did in our last update.  First, let’s tackle North America…

Emerald City Comic Con has been postponed to Summer 2020, but Funko hasn’t forgotten the fans! Funatics are invited to celebrate through Funko Virtual Con, our first ever virtual convention. Funko will be hosting multiple livestreams to connect with the Funko Family, play games, host giveaways, and award prizes to Funatics.

All ECCC exclusive products will be available on Funko’s online store on Friday March 13th. Those who won the ECCC Funko Drawing for first chances to purchase convention exclusives, be on the lookout for an email from Reedpop regarding details about the adjusted first purchase experience. There is not currently a way to guarantee items purchased have convention stickers over shared stickers.

Also, don’t let your cosplay go waste – post a photo of the cosplay you were planning to do for ECCC on Twitter or Instagram throughout this week with #FunkoVirtualCon to play along!

The current schedule of events is as follows:

Join Funko livestreams as we giveaway exciting Funko prizes, show the Funko HQ store, and connect with our Funko Family! During the livestreams we will also review how the ECCC exclusives will be sold on the website. Follow Funko and #FunkoVirtualCon on Facebook, Instagram, and Twitter for more!

Day two of the virtual convention will boast unboxings of ECCC exclusives with the Funko crew, games and contests, as well as familiar Funko faces from the ECCC booth!

8AM – 9AM PST TBA Livestream

All ECCC exclusives will go up for purchase on Funko Shop and the Funko Funkast will be livestreaming from the Funko HQ Lounge in an exclusive Funko Funkast Panel! Link up with fellow Funatics for bad dad jokes, a Q&A session, games, and giveaways. The podcast will be discussing pop culture topics, product hints, and more for the virtual convention experience for our Funko Family.

9AM – 10AM PST Funko HQ Livestream

This is absolutely BRILLIANT.  I’ve already seen loads of excited tweets this morning, including quite a few cosplay pictures.  Go check out the official event hashtag and join the fun!  Other cancelled cons should follow suit.  Based on E3’s announcement, they may be planning something similar.

In the world of book fairs, YALLWest, an event in Santa Monica, California, scheduled to take place April 24th-25th, has been cancelled.  The staff released the following statement:

In the interest of public health and keeping our readers, authors, volunteers, and sponsors safe, it is with great sadness and a heavy heart that we have decided to cancel YALLWEST 2020. We will return in the spring of 2021 and focus our efforts this fall on the 10th anniversary of YALLFest in Charleston.

Book fairs and college campus related events have been particularly hard hit by forced cancellations, which is unfortunate but understandable.  Many college campuses have been moving to online classes, so tight restrictions for campus events absolutely makes sense.

Ithacon, hosted by the longest running comic book club in the country, has also been cancelled.  It was originally scheduled for March 21st and 22nd at Ithica College in Ithica, New York.  They released the following statement:

Much to our regret, we need to inform you that ITHACON, scheduled for March 21-22, is cancelled for 2020.

In recent days we have received several communications from our guests, vendors and attendees expressing their concerns about the COVID-19 virus. We very much share these concerns, although to date there are no confirmed cases of the virus within Tompkins County or the upstate NY area from which ITHACON draws its audience. We have closely followed the communications from the CDC, which have recommended specific precautions.

Yes, this is another college-based con getting the ax.  Ithica college outright cancelled all events with more than 100 people, so their hand was forced with this one.

Now bouncing back on over to Europe, FicZone, scheduled to take place March 28th and 29th in Granada, Spain, has been postponed to September.  So far the Fall seems like a relatively safe time frame that hasn’t been touched by this yet, but anything can change, of course.  I would hope we aren’t still battling this in the Fall.

Romics, a comic convention based in Rome scheduled for April 2nd-5th, has been postponed to May 30th-June 2nd.   As we are now stretching into the summer months with cancellations, I’m not sure that’s far enough away to not get dinged by this again.  It’s also especially concerning as Italy is currently the hardest hit country outside of China.

Italy’s extreme containment measures may make that country level out soon, however, so perhaps they’ll be fine by the time the end of May comes around.  If other countries want to prepare for the summer season, they should also take steps to mitigate the spread now.  Otherwise we might not see any large events until the Fall, if that.

As always, please reach out if you know of a convention that’s been impacted by the COVID-19 pandemic.  I am but one blogger who is perhaps obsessing over this topic a bit too hard, but I am not an oracle.  Be my eyes and ears around the world and fill me in on what I’m missing!