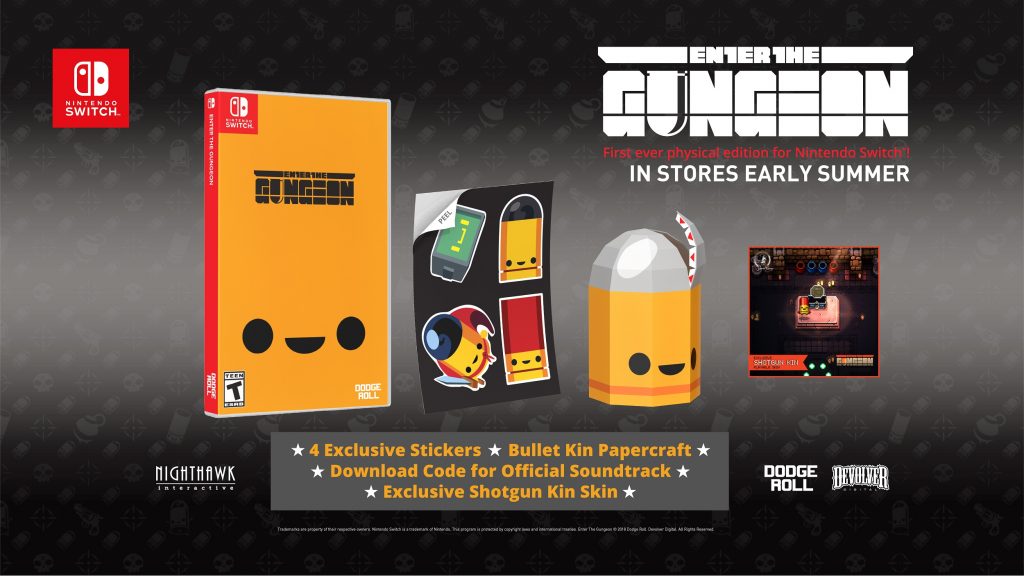 The DLC’s in the Enter the Gungeon retail edition includes the final DLC pack “A Farewell to Arms,” the exclusive “Shotgun Kin” playable skin, the original soundtrack, as well as new collectibles including exclusive stickers, an exclusive Bullet Kin papercraft, and reversible jacket artwork. This special Enter the Gungeon retail package is available for $29.99 in stores including Amazon, Best Buy and GameStop.

From developer Dodge Roll and publisher Devolver Digital, Enter the Gungeon is a constantly evolving gunfight dungeon crawler that allows players to choose from a team of unlikely heroes as they battle their way to the bottom of the Gungeon in search of its ultimate treasure. In order to survive a challenging and evolving series of levels filled with the dangerous yet adorable Gundead and fearsome, formidably armed Gungeon bosses, players will stock up on and customize weapons of their own to defeat their foes, with hundreds of options to discover. While wrapped in charming pixelated visuals, Enter the Gungeon presents complex combat challenges that push players to constantly adapt their tactics over repeated playthroughs to truly master.

The retail edition of the title comes packed with content and exclusives, including:

Enter the Gungeon is available now for Nintendo Switch at North American retailers for $29.99. The game is rated T for Teen by the ESRB for Fantasy Violence, Blood, Suggestive Themes, and Alcohol Reference.

As for Nighthawk Interactive, built by a team of industry veterans, “it aims to combine their proven experience with the ever-changing needs of modern game development. With a strong focus on publishing, co-publishing, retail distribution and business development support, Nighthawk is about helping developers make the great games we love to play.”