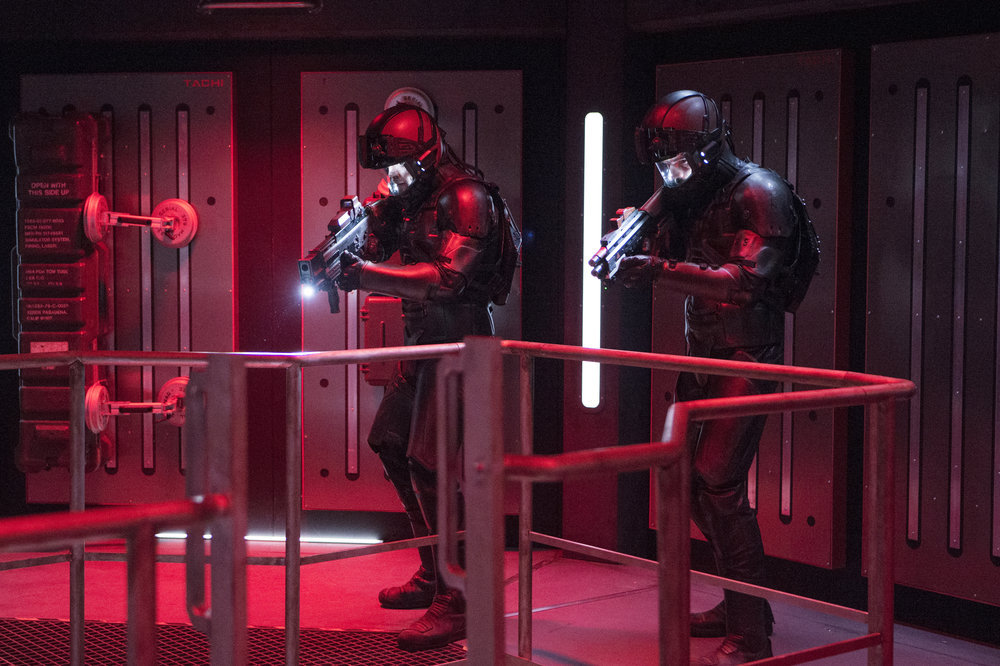 While the events of “Caliban’s War” didn’t so much up the stakes as completely change the game, this didn’t really feel like a season finale of The Expanse.

There are a lot of things from “Caliban’s War” we could discuss, but let’s start with that ending: the Arboghast being instantly disassembled by the protomolecule. That was such a stunning scene visually, not to mention completely haunting. To know that the protomolecule has the power to do something like that, and it’s also that intelligent and curious as to want to know how something is put together instead of simply destroying it… Humanity is in for a rough time. 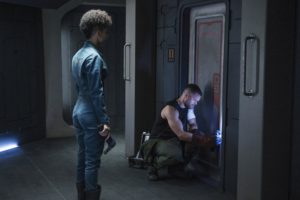 Contrast that with the proto-human hybrid that’s stowed away on board the Roci, which spends the majority of the episode peeling back the floor and then is fooled into jumping off the ship chasing after a nuclear core. I’m not going to lie and say it wasn’t legitimately terrifying, especially the way it kept going after Holden, but it doesn’t seem to be as intelligent as whatever the hell is going down on Venus is. Perhaps that’s the human half of the equation dumbing things down.

Speaking of Holden, thank the maker that he has regained his brain. I’m not sure if it was “losing” Naomi that made him succumb to his more primal instincts, but thankfully Alex was there to pull him back, and now he’s back — a little wiser, a little less trusting. He spends much of the episode in jeopardy — pinned to a wall and trapped in a room with a proto-human hybrid that’s trying to tear his ship apart — and it’s through this that he becomes the captain of the Roci once more. He sends Amos away for his safety, and he’s completely willing to sacrifice himself to save the rest of the crew. This, finally, again, is the Jim Holden I’ve come to know.

It’s refreshing that Naomi finally came clean with Holden about not destroying their sample of the protomolecule. It’s also refreshing to know that she gave the sample to Fred Johnson and not Dawes, as I’d originally feared. The Expanse could have easily used this opportunity to create a rift between Naomi and Holden, but after the events of the past couple of episodes (i.e. both of them nearly dying), I think that isn’t likely to happen. Plus, Naomi has a point. The protomolecule is unlike any weapon in history, but at the same time, it’s still a weapon, and now that Earth and Mars know about it, it’s only fair that the Belters be given access to it as well. 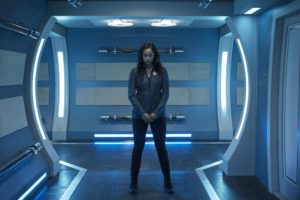 I’ll admit that I’m slightly disappointed by Bobbie’s big scene at the end. It’s more of a classic sci-fi vibe to have the narration over the action, but after the build-up during the episode, I was hoping we’d get to see her be badass in the suit for a little bit longer. Of course, she balances this by being badass pretty much throughout the entire finale. Can I also say how much I love that’s she’s seemingly so loyal to Chrisjen already? She didn’t have to come back and save them, but she did, and she did it in spectacular fashion. This knowledge goes very well with her speech to the electrician about how Mao doesn’t deserve his loyalty or his sacrifice.

Some of the other characters got their big moments as well. I’ve been really impressed with Amos’s development over the past two seasons, and his “goodbye” to Holden was well-done and in-character. Prax had the chance to sort of be a hero and really cement his place on the Roci by coming up with a way to save Holden and get the protomolecule off the ship; true, he nearly blew it because he thought it may have been his daughter, but he came through in the end. And then there was Coytar, who got himself shot defending Chrisjen but was tempted for a moment to take the deal and save his own skin. We didn’t have to find out what he would have done, though, because Chrisjen gave herself up first.

And with that, we have to wait until next year for more of The Expanse.

What did you guys think of “Caliban’s War”? What are you hoping to see in season 3?