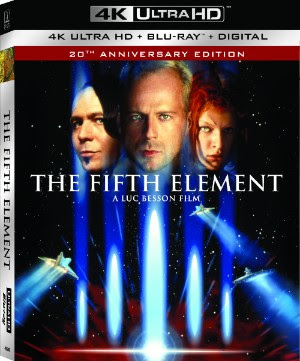 If you’re in geekdom, chances are you’ve already seen The Fifth Element. If you haven’t yet, then what are you waiting for? Get to watching!

The sci-fi classic stars Bruce Willis, Milla Jovovich, and Gary Oldman. It follows the adventure of a cab driver named Korben Dallas who ends up being a central figure in the galaxy-wide search for a legendary cosmic weapon. The upcoming 4K Ultra HD release will offer fans hours of archival special features. You can also treat yourself to an all-new feature titled “The Director Notes: Luc Besson Looks Back.” The new feature is presented in 4K and has director Luc Besson “discuss the origins and impact of the celebrated film.”

New York cab driver Korben Dallas didn’t mean to be a hero, but he just picked up the kind of fare that only comes along every five thousand years:  A perfect beauty, a perfect being, a perfect weapon. Together, they must save the world. Bruce Willis, Milla Jovovich, and Gary Oldman star in acclaimed director Luc Besson’s outrageous sci-fi adventure, an extravagantly styled tale of good against evil set in anunbelievabletwenty-third century world.

Another one of Luc Besson’s films, Leon: The Professional (starring Jean Reno and Natalie Portman), will also see an 11 July, 2017, 4K Ultra HD release. It will be exclusive to Best Buy.

The screenplay was by Luc Besson and Robert Mark Kamen. It was based on a story by Luc Besson. Patrice Ledoux produced it.

The Fifth Element has a run time of approximately 126 minutes. It is rated PG-13 for intense sci-fi violence, some sexuality, and brief nudity.

Are you a fan of The Fifth Element? Are you excited for the 20th Anniversary 4K Ultra HD release? Let us know.