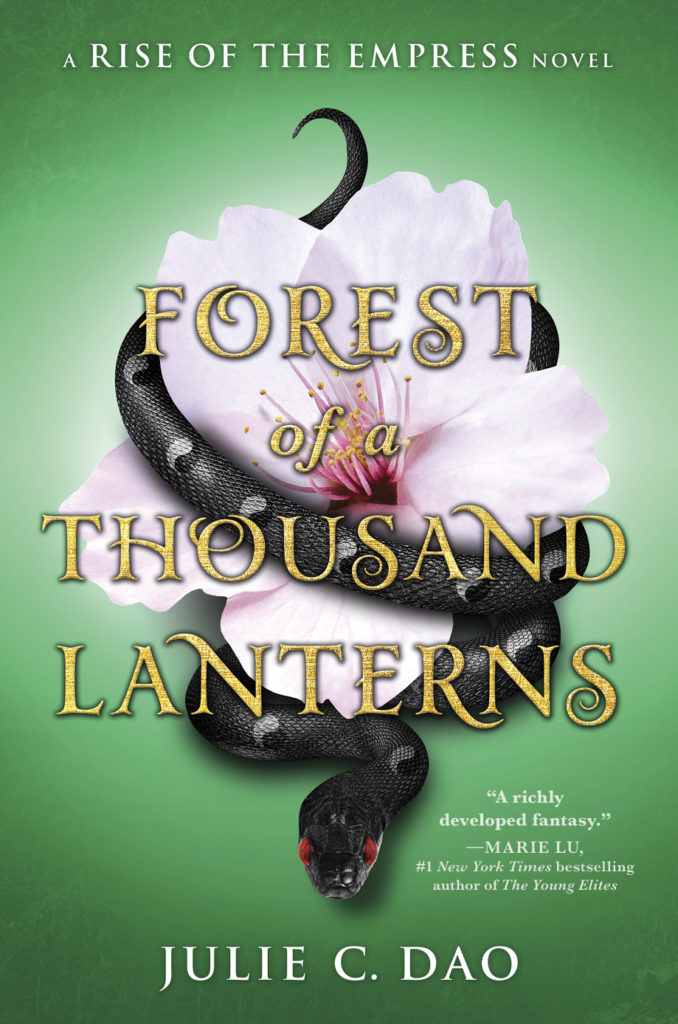 Before I started reading, all I knew about Julie Dao’s Forest of a Thousand Lanterns was that it was very popular at this year’s BookExpo. After finishing, I wasn’t quite sure how I felt about it. This morning, when I was reading other people’s reviews searching for a way to articulate my thoughts, I discovered something important.

Forest of a Thousand Lanterns is an East Asian re-telling of the origin story of the Evil Queen – as in, Snow White’s stepmother. I was completely unaware of that going in. Once I learned that, quite a lot of the book made so much more sense, and in some cases I found myself wondering how I didn’t pick that up sooner.

Knowing this vital piece of information goes a long way in excusing one of the main issues I had with the book, which was the inconsistent pacing. I knew that this was the first book in a series, so it made sense that the beginning was a slow build. The series is called “Rise of the Empress”, so I assumed that main character Xifeng would spend the book getting herself in position for the massive destiny promised by her aunt. In truth, the first maybe three-quarters of the book are on par with the pacing expected in the first book in a series. It takes place over several months and spends an appropriate amount of time with world-building and character development. Once things start happening, the last quarter of the book spirals rapidly, encompassing years. Now that I’m aware that this is an Evil Queen origin story, I realize that this isn’t poor structure, but simply glossing over elements of the story that aren’t important in the grand scheme of things. Getting Xifeng to that turning point was the important part, and everything else after is just dressing.

On the other hand, perhaps not knowing that Xifeng was the Evil Queen helped me try to sympathize with her more than I would have, had I known. Xifeng has spent her entire life being told by her aunt that she’s meant for some great destiny, and as such has grown up entitled, selfish, and petty. This is what makes her such a compelling character, because you don’t really like her, but you still want to know what will happen to her. I was hoping that at some point, her weak, internal moral debate would lead to her deciding to be a better person. But, of course, this is the Evil Queen, so that doesn’t happen.

Forest of a Thousand Lanterns is beautifully written, centered around a relatively complex anti-heroine (I’m not even sure you can call her that, she’s pretty much straight up a villain) and involving an intriguing plot about magic, politics, and destiny. There is a pretty great lesson in there about destiny and freewill; Xifeng makes the choices she does because she believes it to be her destiny, but she still makes the choice. Not to mention, it’s refreshing to see a story about a female villain who doesn’t turn evil because of a broken heart or something ridiculous like that.

I highly enjoyed this book. It sucked me in quickly, and I’m very eager to read the second book, which I imagine will be the story of Snow White.

Forest of a Thousand Lanterns by Julie C. Dao is published by Philomel Books and is currently available wherever books are sold.