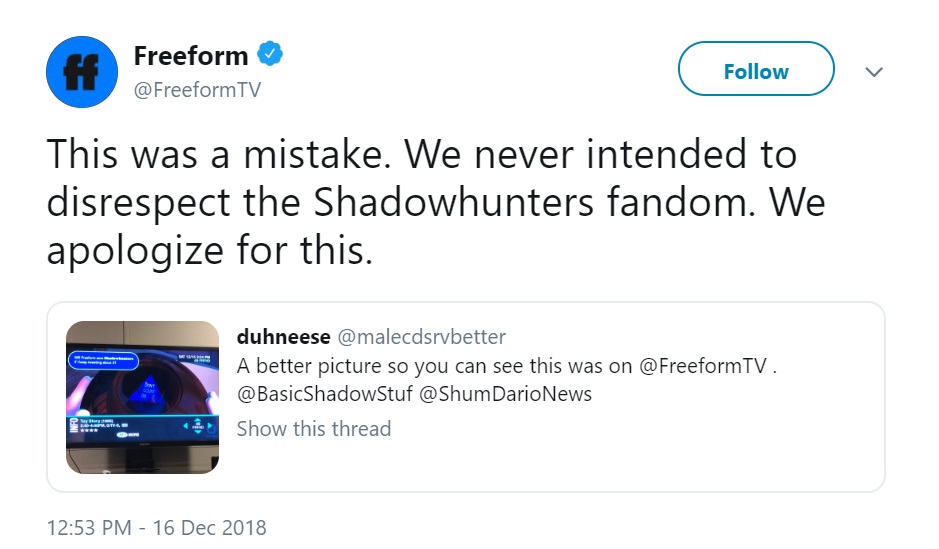 In a move (I thought would never occur on TV), Freeform ended up mocking the highly-passionate Shadowhunters fandom during a pop-trivia airing of Toy Story. Of course, fans are understandably angry. The network has shared a flimsy excuse as an apology.

Shows get canceled. That’s just how it is. However, due to the existence of streaming platforms and more networks, fans are able to use social media to save a show they love. I let out a breath of relief when NBC decided to pick up Brooklyn Nine-Nine for the sixth season. Netflix came to save Lucifer. However, the Shadowhunters fandom is still trying.

Freeform announced back in June the supernatural show has been canceled. The remaining 10 episodes from the third season will begin airing on February 25, 2019. A two-hour finale will follow sometime next year.

This is the statement Freeform released back then:

We are very proud of ‘Shadowhunters,’ a series that broke new ground in the genre world and became a fan favorite. However, along with our partners at Constantin, we reached the very difficult decision not to renew the show for a fourth season. But as big supporters and fans ourselves, Freeform insisted on and championed the filming of a special two-part finale that would give devoted fans a proper ending. The twelve episodes will air in spring of 2019. We want to thank our talented creators, producers, cast and crew along with our colleagues at Constantin for their hard work and dedication and to Cassie Clare for her incredible book series. We look forward to the final chapter of this breakthrough drama.

During the time, even though the show was canceled, it was good to see TPTB still cared enough to give fans an ending, which is something a lot of fandoms don’t get. While Shadowhunters fans have continued the campaign for the show’s renewal (including earning more than $22,000 for The Trevor Project), what the network recently did was mean and unnecessary.

The scene, in particular, featured a magic eight ball which answered “Don’t count on it” regarding “Will Freeform save Shadowhunters if I keep tweeting about it?” 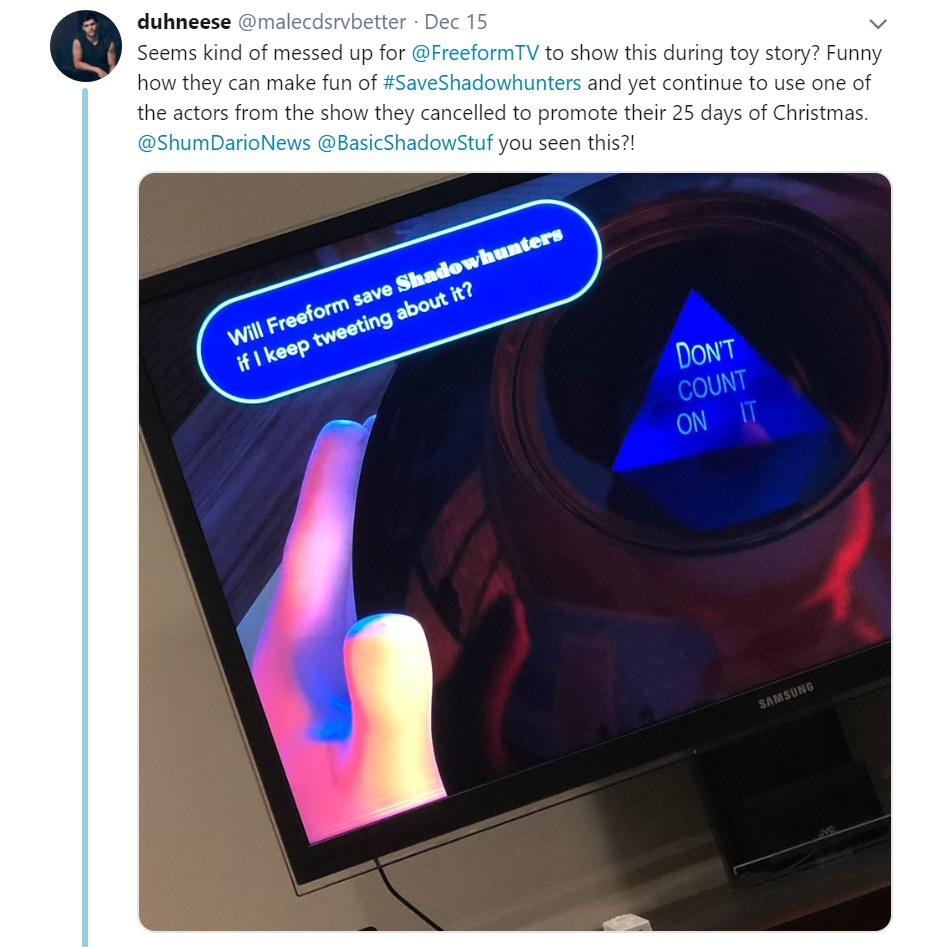 I mean, that was a lot of effort for a mistake. I guess now the fandom knows how TPTB feel about the show’s fandom. They have likely been laughing at the fandom’s continued efforts to save Shadowhunters.

What Freeform did is downright disrespectful. You do not blatantly disrespect a supportive fandom.

Here’s to hoping some other network sees the fandom’s passion and decides to save Shadowhunters. I don’t think Netflix wants anything to do with properties related to Disney due to the House of Mouse’s streaming service. Perhaps Hulu?